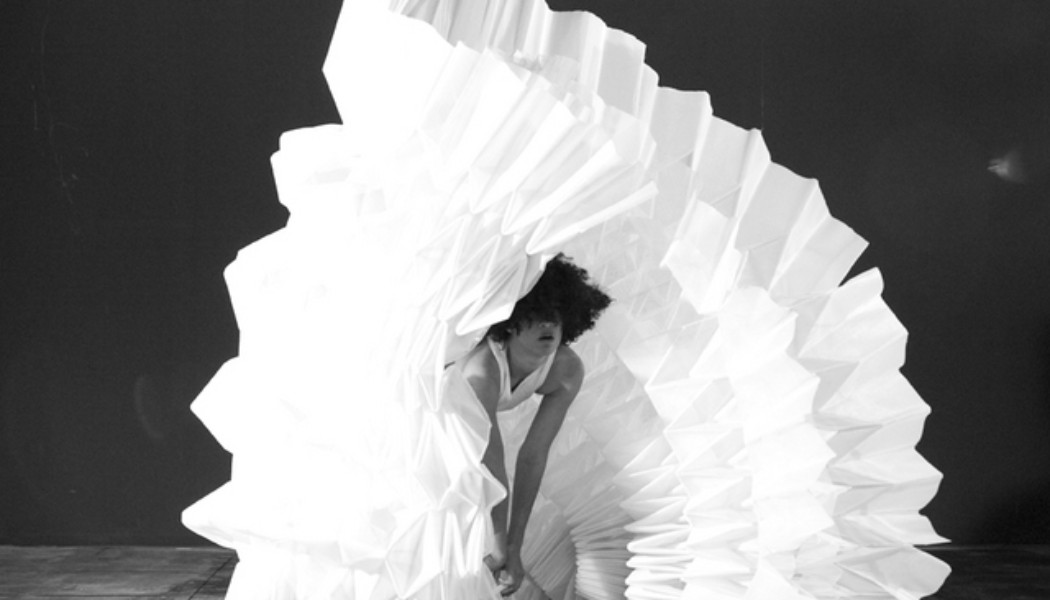 Site-specific work incorporates improvisational structure, and instantaneous movement by performers. Composers often interact with the choreographer and the dancers to provide an original, semi-spontaneous score. Combining architecture, movement composition and edgy emotion, spaces come to life as structures are re-envisioned and re-assembled into vertiginous life forms.

The performance will take place on the 3rd floor of the building where Ian Trask’s ” Worm” long of 165 feet and made of cardboard, will be snaking around, creating open, empty and hampered spaces for the performers.

Collaborative Performance works: Judith Sanchez Ruiz work is drawn to the exploration of the body’s raw and visceral movement. She pursues a choreography that deals with the radical transformation of qualities and textures in relation with body architectures and geometrical shapes. She has been for a few years fascinate by the exploration of Half Body, specially in context that offer compositional develop or encounters with Visuals artist work in alternatives places. She studies the architecture and surrounding space in advance and generates ideas, which are then brought to dancers who will be in the piece. The ability to make imagination fly through a redefinition of landscapes makes these performance works a living sculpture. Combining architecture, movement composition and edgy emotion, spaces come to life as structures are re-envisioned and re-assembled into vertiginous life forms: vibrant, refined worlds emerge. This offer an incredible opportunity to create a work exclusively from the collaboratives influence of all involve and the richness of the Invisible Dog as Art Center.

Similar productions by Judith Sanchez Ruiz have been created and performed at The Whitney Museum (DVD available); The Walker Art Center; and The Museum of Modern Art

Judith Sanchez Ruiz is the Artistic Director of JSR Company.. She was born and raised in Havana, Cuba. She has worked with David Zambrano, and Trisha Brown Company, among others. Her work has been show nationally and internationally. She has also developed various collaborative projects with innovative composers Henry Threadgill, and Steve Coleman; as well as visual artists; Stephen Talasnik, Sun K Kwak, Kentaro Ishihara, Jonathan Cramer, Burt Barr, Daniel Arsham, and Photographer Anna Lee Campbell. She was awarded “Mujeres Destacadas (Outstanding Women) 2008″ by the Spanish newspaper El Diario. She was also selected by Dance Magazine as one of the 25 Dancers to Watch in 2010.

Ian Trask is a Brooklyn based emerging artist making the career transition from science to art. As a sculptor who explores the inherent aesthetics of material waste and found objects, Ian found a temporary home at The Invisible Dog as the art center’s first artist-in-residence. Future opportunities to see his work include the Figment Art Festival on Governor’s Island June 10-12, as well as a summer-long group show at The Wassaic Project, in Wassaic, NY. To learn more about the artist visit his website at www.forkartist.mosaicglobe.com

Simon Wehrli (Switzerland) studied at Scuola Teatro Dimitri (CH, BA in the Arts of Physical Theatre) and at Laban School for contemporary dance in London (UK, Diploma in Dance Studies). He collaborates as dancer, actor and musician in different projects in Europe and the USA. As part of the Swiss-based movementheatre collective Spettatori and of the dance-improvisation project 50collective he tours internationally. In 2010 he was selected to participate in 50 days of flying low and passing through Costa Rica led by David Zambrano. Along his work as performer Simon teaches and taught dance and improvisation at Laban (London, UK), Scuola Teatro Dimitri (Verscio, CH), Dance New Amsterdam NYC (USA), Lou Conte Studio Chicago (US), Lisarco Danza (Madrid, ES) and other places.