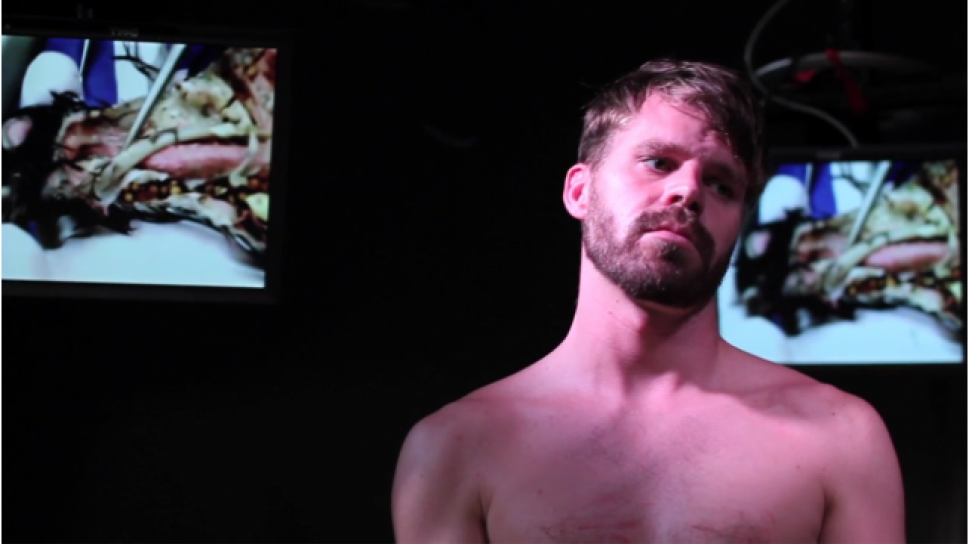 Above: In a back room at the hospital, surgeon Gwen Ellis pontificates on the state of commercial medicine while performing blindfolded operation using resident Andrew Gilchrist as a human puppet.

In the piece, five unrelated individuals are drawn together by mysterious visions. They each believe the visions have given them strange “gifts”—clairvoyance, fantastical carpentry skills, healing, tele-perception, a bird-child. And since the visions began they all hear an ever-present melody that compels them to play a ritualistic game, a game where they change their names (and spirits) and “kill”.

We began creating this production from the idea that instead of working with a play script, we were more interested in the type of “script” that computers use—something functional, self-contained, recursive, and (to us non-programmers, anyway) enigmatic and partly incomprehensible.

From there, we studied computer scripts for simple programs—mostly “golden era” games like PacMan, Colossal Cave Adventure, Asteroid, Zork. We began constructing on stage our own game-like world hybridizing these various code structures and adding elements of an outside narrative inspired by interviews with the programmers of these early computer games.

Eventually our broader interests as artists seeped into the piece, and a multiform narrative emerged that combines the ritualistic game structure, the Altman film, interrogations and confessionals, dance, lecture-demonstrations, and reflections on the pursuit of an abstract and collective dream.