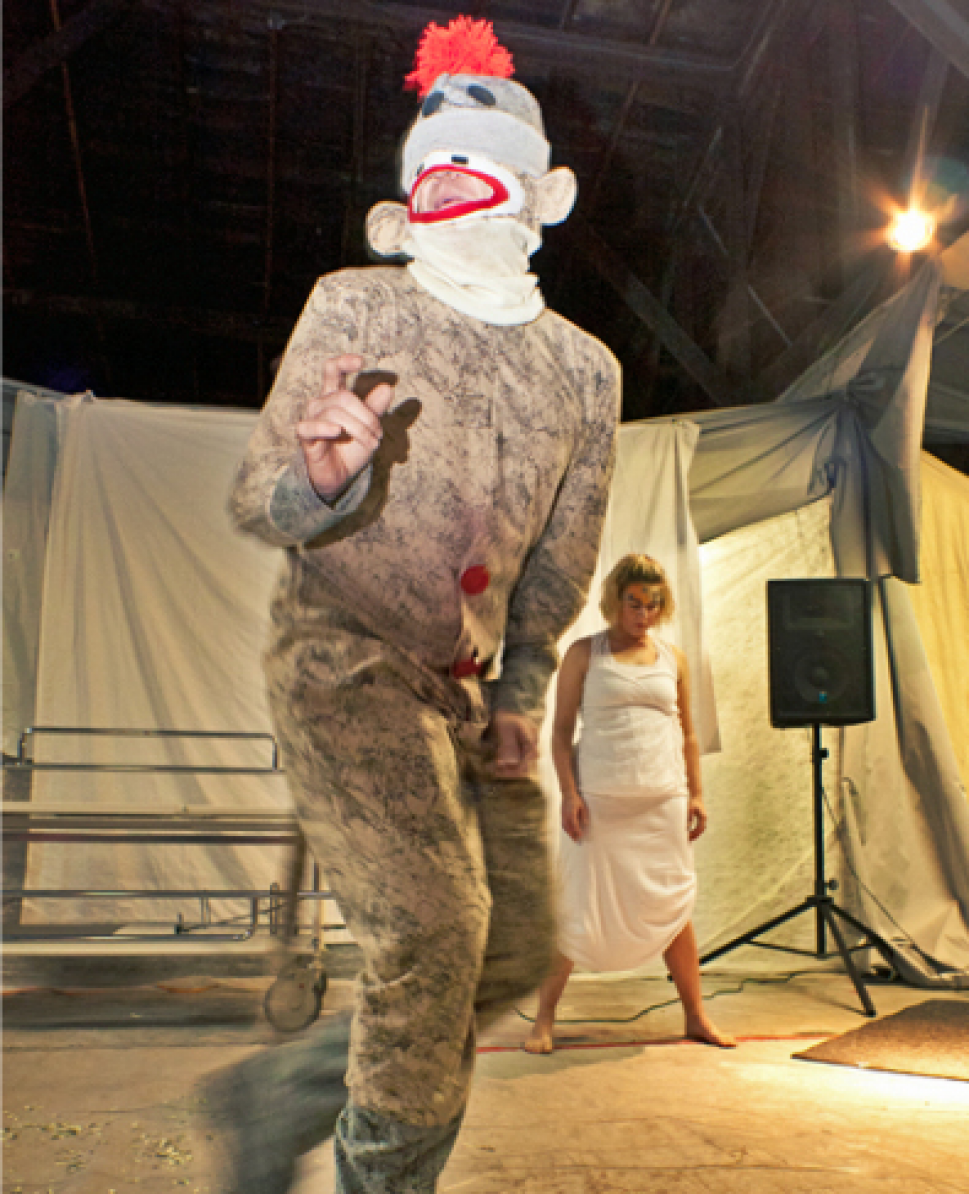 I am a Scotch-Irish-Cherokee child of Appalachia and former corporate lawyer, whose work explores the concepts of: (1) Nature (DNA) vs Nurture (religion, politics, homophobia, racism, elitism, violence, etc); and, (2) the role of “free will” in determining self-worth in the conformist-based culture of the American South. My performances combine elements of visual art, science, experimental theatre, and, unflinching, unapologetic poetry in quasi-shamanistic rituals of release and transformation. Generally inspired by a story telling narrative that is not that different from the first art created on cave walls to the songs of Nina Simone and Patti Smith, my process blends folk traditions with fine art traditions and humanity with mysticism. The idea of the tangible and intangible, eternal and ephemeral both inhabiting and sharing an uneasy co-existence within a piece fascinates me. Ultimately, my artistic approach is continual exploration of the relationship between seen and unseen things.

Can you tell us a little about your history and your performative concerns.
Over the past couple of years – from Kentucky to NYC to Paris to Miami – my performance work has been primarily concerned with our increasingly rhizomatic identities. I blend post-modern shamanism with gritty street culture and low-brow art and have deep roots in the traditions of spoken word poetry, experimental theater and installation. I believe in collaborative projects and my performance work most always incorporates dancers and musicians in some significant way. The primary role of the dancers/musicians is not only to emphasize the principle performative elements, but, more importantly to add subtle layers of contradictory meaning and irony to the message being conveyed in the performance.

I’m often asked why identity based work? I believe that we are entering a new period of identity crisis on a global scale. Identities are constantly in a state of construction and deconstruction. And, while representation through the image of the body and identity permeates art history, at the beginning of the 21st century, in the context of postmodern and cyberculture philosophy, I feel part of a growing group of contemporary artists seeking to explore and probe this representation of the self and the Other through means that are phenomenologically based. I have been criticized as being “old-school” in my approach. But, as seen with the revived interest in Abstract Expressionism (see Amy Sillman’s essay Ab Ex and Disco Balls – ArtForum Summer 2011), I believe that my approach, content and context has new relevance in contemporary discourse.

Postmodern thought, as a rule, postulates that the individual discovers otherness in relation to the self. Where formerly there was an attempt to respond to the question “who am I?” through a singular entity of self, the variability of identity henceforth becomes possible. In the course of his/her life, the human being can acquire multiple simultaneous identities which can even encompass contradictory attitudes. The general trend is towards a greater flexibility of identity. “I is another” is being readapted in the postmodern era to “I is several others”.

The recent development of cyberculture in the “communication society” contributes largely to the multiplication of identity. Online social networks enable everybody to create multiple profiles; virtual realities are—veritably—lived through “avatars”, characters representing a user on the Internet and in video games. This “poly-belonging” enables the individual to discover and express multiple facettes of himself/herself, to have the freedom to play with one’s own identity—through masks or not—and to open the way to otherness. This is why I see the “shaman” and his vision quests as a particularly timely and flexible avatar that allows me to explore the socio-cultural aspects that drive us in both our public and private relationships.

What projects are you working on now?
I just finished a major project last week. Along with UK faculty members Dima Strakovsky, Rae Goodwin, Doreen Maloney and other artists, we organized an international performance art gathering called Lex Lak Lou. (Lexington Live Art Kongress Louisville) A diverse group of European and American artists performed their work at various venues in Lexington and Louisville and participated in panel discussions hosted on campus at the University of Kentucky. The participating artists represented a variety of contemporary performance practices, which ranged from the confrontational interaction with the audience to traditional proscenium presentation.

The international focus of Lex LAK Lou 2011 provided Kentucky-based artists a new opportunity for the cross-cultural sharing of ideas and the chance to participate in a truly international dialog around performance art. Lex LAK Lou 2011 was the inaugural presentation of what we hope will become a regular event that helps Kentucky become an increasingly important part of the international contemporary art discourse. Folks can find out more about it at www.lexlaklou.org

Next, up I am beginning to work with a composer friend, Emily Hagihara, on a new wave opera… part punk, part shamanism, part Dr. Suess… called “Space Bunny Saves the Galaxy”

What was the last piece that you saw that you would recommend to the Network and why?
While I have yet to see it in person, I am completely obsessed with “The Life and Death of Marina Abramović” which is a collaboration of four tremendous forces of our time each of whom I admire… Robert Wilson, Abramović, Antony and Willem Dafoe. It’s interesting to me that the traditionally anti-theatre Abromovic is now moving toward proscenium presentation.

I also was lucky enough to get to perform with Penny Arcade at LexLakLou. What a lady! What a performance artist! If she is ever performing near you… GO!

To read some of my poetry, you can visit my website www.theoedmonds.com