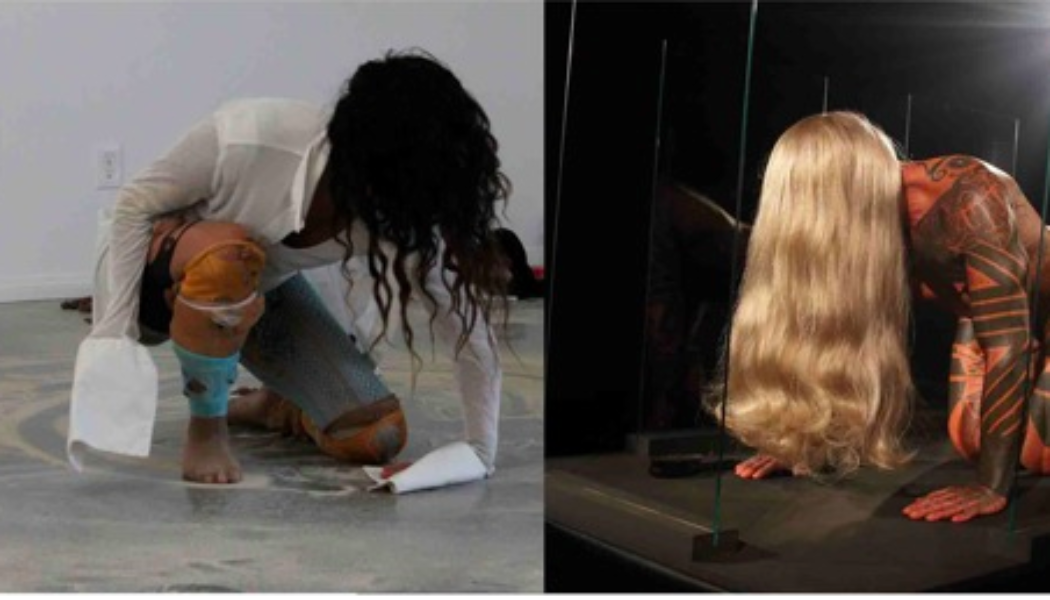 Julie Tolentino creates intimate solo movement-based installations including her time-based durational performances, sculptural endurance events and audio soundscapes. Currently, her work centers on the body’s (inevitable) disintegration, the excesses of aging and the body’s attempt at secrecy via hidden texts, history, emotion and memory. Tolentino was a lead senior member and company tour manager in David Rousseve/REALITY Dance Theater, a co-director, choreographer, and performer with Ron Athey Company, and has collaborated extensively with many others. She was the original creator of the NY Clit Club, and appeared in Red Hot and Blue’s “Safe Sex is Hot Sex” poster and Gran Fury’s national bus campaign “Kissing Doesn’t Kill” in the early 1990s. She is the co-author of the Lesbian AIDS Project’s Women’s Safer Sex Handbook, and was a member of ACT UP New York affinity groups, House of Color Video Collective and Art Positive. She received an ART MATTERS 2010-11 grant for research/travel to the Philippines and two Yellow House Fund/Tides Foundation grants for curatorial research and programming. She is co-director with Ron Athey of the PRAXIS MOHAVE BOOTCAMP FOR PERFORMANCE ARTISTS, a bi-annual ten-day intensive workshop for international artists, and divides her time between Joshua Tree, Los Angeles, New York City.

Ron Athey’s performance and body art explores stagings of crisis, sexuality, religion, ritual, and death, interrogating the intersections between punk, queer and alternative cultures as well as the practices and politics surrounding HIV/AIDS. His work often engages directly with the ideas of queer philosophers and artists like Georges Bataille, Pierre Molinier and Pier Paolo Pasolini. Athey began performing at underground clubs and galleries with Rozz Williams in 1981, and rose to international prominence during the US Culture Wars of the early 1990s, touring extensively with a large company managed by Julie Tolentino, as well a creating solo and duo works. He has been a regular contributor to magazines and newspapers including Honcho and the L.A. Weekly, as well as curated performance art festivals in the U.S. and in Europe. Most recently, Athey has been a Visiting Artist in the Centre for the History of Emotions at Queen Mary, University of London. He is studying towards a PhD at Greenwich University, and currently lives in London. The first ever publication devoted to the work of Ron Athey, Pleading in the Blood: The Art of Ron Athey (edited by Dominic Johnson), will be co-published by the Live Art Development Agency (UK) MIT Press (USA) in 2012.