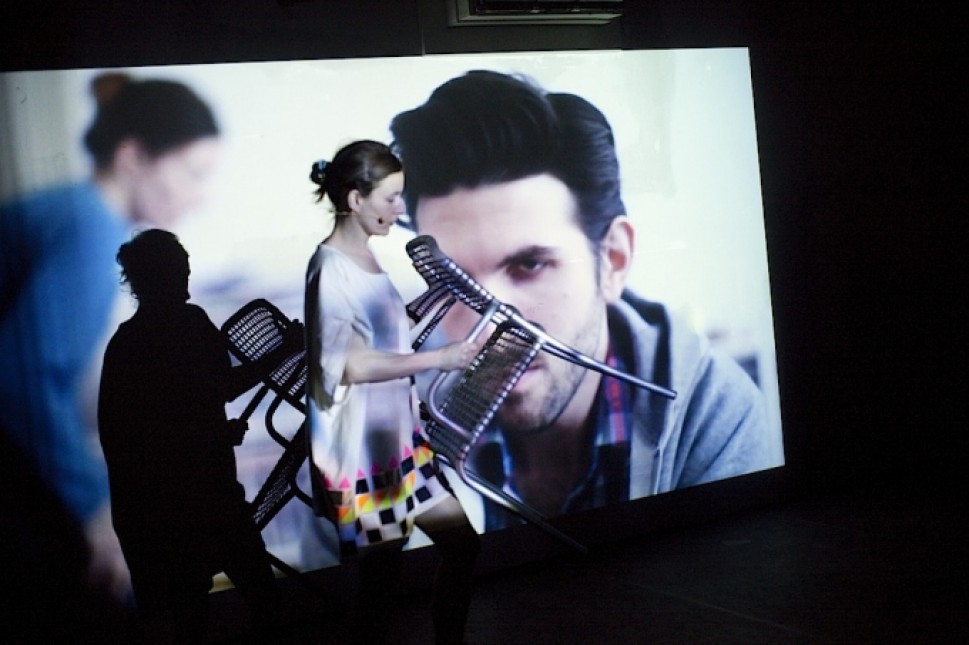 Curated by Tim Griffin
Reservations required: Please RSVP to cytterRSVP@thekitchen.org and provide your first and last name, your email address, and the number of people in your party.(Maximum of 4 tickets per person). You will receive an email confirmation when we receive and accept your request.

Show Real Drama is written and directed by artist Keren Cytter, and based on the life of two of her actors, Susie Meyer and Fabian Stumm. Having graduated from the University of Acting in Salzburg, Germany, Meyer and Stumm soon find themselves unemployed and isolated from the entertainment business in old Europe. After countless failed attempts to get hired, they decide to write and direct scenes for their own showreels. For Show Real Drama, the pair presents these videos, recounting the experiences they had while filming. With an alternating mix of elegant dance and violent movement, their acting shifts from classical drama to existential embarrassment, while their story unfolds through repetitions of text and gestures, shuttling between seemingly improvised moments to choreographed movements, creating a fractured yet empathetic storyline.

The Kitchen’s presentation of Show Real Drama is made possible by a generous grant from Artis. This program is made possible with support from The Andy Warhol Foundation for the Visual Arts and with public funds from the New York City Department of Cultural Affairs and the New York State Council on the Arts, a state agency.

Keren Cytter was born1977 in Tel Aviv,Israel. She lives and works inBerlin. In 2009 she was awarded the Absolut Art Award and shortlisted for the Preis der Nationalgalerie für junge Kunst inBerlin. In 2008 she received the Ars Viva 2008; Preis für Bildende Kunst des Kulturkreises der deutschenWirtschaft,Berlin, and in 2006 the Bâloise Art Prize inBasel.

Her play History in the Making, or the Secret Diaries of Linda Schultz with the dance company d.i.e. was presented at Tate Modern,London, Hebbel amUfer,Berlinand Van Abbemuseum,Eindhoven.

Fabian Stumm, born in 1981, lives and works inBerlin. He studied acting at the prestigious Lee Strasberg Theatre & Film Institute inNew York City and has appeared in numerous theatre and film productions. His film credits include roles in the thriller BELA KISS by Lucien Foerstner and the second world war drama LORE by award winning australian director Cate Shortland, both set for release in 2012. Since 2003 he has had theatrical engagements inBerlin at Hebbel am Ufer and Sophiensaele, among others. In 2009 he joined israeli artist Keren Cytters dance/theatre/performance company D.I.E NOW and performed on their international tour inLondon,New York City andGlasgow. Cytter also cast him in several of her films such as CROSS.FLOWERS.ROLEX, a short film trilogy which was nominated for the Preis fuer Junge Kunst der NationalgalerieBerlin in 2009.

Susanne Meyer, born 1977 in Bonn/Germany, resident in Berlin, graduate of the University Mozarteum of Music and Acting Salzburg/Austria, has made a varied career in the performing arts in theatre and art movies. Among others, she has worked with Sabine Andreas, Jay Scheib or Alexander Marusch at different theaters as Bayerisches Staatsschauspiel Munich or Hebbeltheater Berlin (HAU). Moreover, she had worked with Gavin Quinn in Dublin for the Ulster Bank Theatre Festival and had roles in films by the Portugese artist Nuno Cera. In 2009/2010 she has been on tour with Keren Cytter’s company D.I.E NOW, presenting shows at various theatres, including in The Kitchen/New York City, The Tate/London and HAU/Berlin. Nightmare was her first film work with Keren Cytter. She also appeared in some other films by Keren, among them The Great Tale Of The Devil’s Hill And The Endless Search For Freedom in 2008, Les Ruissellments du diable in 2008,Flowers in 2009 and Ein guter Freund ist schwer zu finden in 2010.