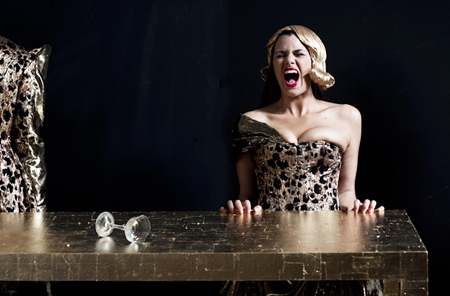 During the fall of Babylon, a fat-ass FEAST is prepared while civilization crumbles just outside the gates.

FEAST is a retelling of the ancient story of The Writing on the Wall, in which the last meal of an era is carefully prepared just before the collapse of the great Babylonian empire. The King and his Chorus of Concubines riff on Handel’s baroque operetta, Belshazzar’s Feast, while devouring everything possible at the banquet table. Despite impending doom, we humans persist, sparing no expense – “The first course first of course” says The King as his city burns in the distance. As we consider how to rebuild a failing civilization, we somehow slip further and further from our noble intents. At FEAST we face a world in which self-consciousness does not guarantee progress.

The language of FEAST focuses on the formal qualities of words and punctuation, with particular attention given to the inherent rhythm and the phonetic quality of words. FEAST engages the implicit violence and intimacy of eating together while tearing apart the language we live by.

ANDREW ONDREJCAK’S performances combine language experiments with visual storytelling and theatrical mise en scene. In 2006, he began writing and producing his own theater works and, in 2008, Robert Wilson saw his work and invited Ondrejcak to the Watermill Center. Since then, Ondrejcak has been experimenting with language and performance, most recently developing a series of new plays under the guidance of playwright Mac Wellman. In 2010, Andrew performed in Marina Abramovic’s retrospective at MoMA; in 2011, his own performance piece Veneration #1 premiered at the Guggenheim Museum as curated by Robert Wilson, and he contributed a new performance for the film DAU, to premiere at Cannes Festival. As a stage and production designer, Andrew creates sets for the fashion industry, including Vogue, Numero Paris, Italian Vogue,Wallpaper*, W, V, among others.