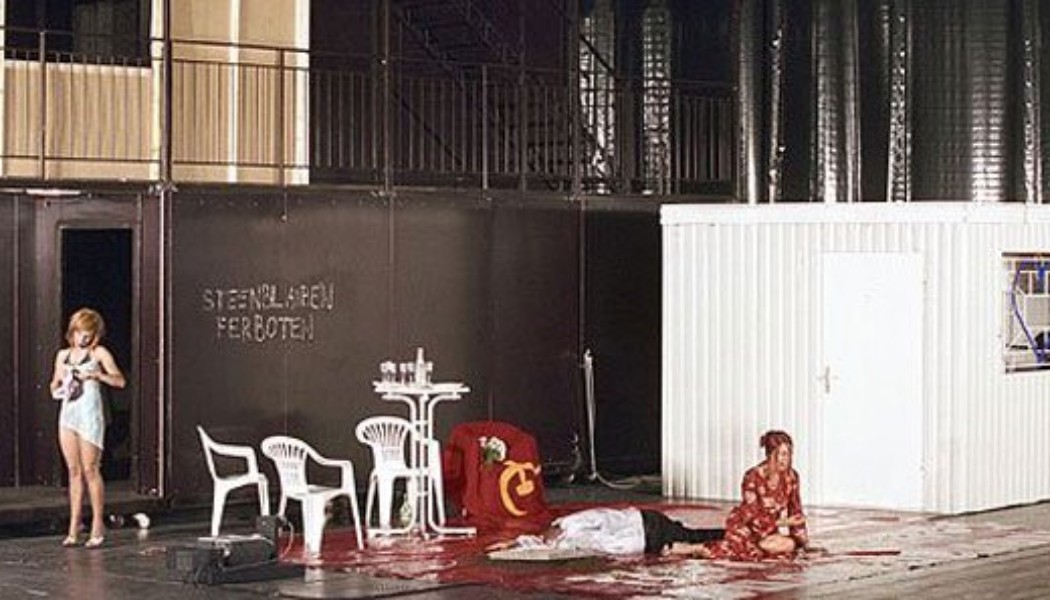 [amazonify]3934344089[/amazonify]Bert Neumann, chief set designer at Berlin’s Volksbühne since 1992, grew up in East Berlin, studied stage design at the Kunsthochschule Berlin-Weißensee and with Leonore Blievernicht and Susanne Schuboth founded the design firm LSD (Last Second Design) in 1990. In the interview he tells of the façades in our everyday lives, the sadness of fun fairs and the secrets of good stage design.

Herr Neumann, what is stage design for you?

To begin with, it’s a space in which actors will conduct themselves. But it’s also a place where life happens. I have the wish to be able to facilitate a type of existence on stage that is more than a mere staging. The people there spend a lot of time with one another, not least of which is during rehearsals. One opts to spend several weeks or months together. It’s a bit like in a partnership. My spaces are the world in which life in the theatre is lived.

A life in between. Your spaces give the impression of being unfinished. The audience frequently sees the naked construction of the stage setting.

My spaces are what they are. They are not trying to create illusions. But that doesn’t mean that I don’t employ a certain magic. I like to play with elements of the circus, or the fun fair. Locations that are undisguised and where the illusion is so obvious that it is quite clearly recognised as fake. The sadness of a fun fair, to me, is in even just the attempt to bestow some sort of comfort with colourful light bulbs. It affects me and so I use it as well. There is illusion in my spaces only if you are allowed to also see the backside.

Beer stands, dosshouses, construction sites, mobile homes: They eagerly show the fringes of our cities and of our society and they ask much of the audience.

The disparate is one thing that’s simply important to me as a stylistic device. The undisguised, the roughened, indeed, and also the used up. But also the question: to what degree does pretence mould our everyday lives? How are we fooled by our cities’ façades. The power of the fake. I found it fascinating how the surfaces in Berlin have changed since the fall of the Wall. From the grey flaking wall to the sunny yellow houses. There was this peculiar experience that it was actually quite beautiful in the broken East because it was a relief not to have to walk around among these sanitised high-gloss worlds and to have no pressure as a person to conform to this perfect world.

Openness and Fracture
Where do you find the inspiration for your spaces?

I get most of my ideas when I’m on my way somewhere in the city. When I’m walking past a construction site on the street and see that the plans posted on the scaffolding have been strangely slashed so that the wind can whistle through, such an image can give me an impulse for an idea. So I’m happy to be in places where things are in flux. For example in Warsaw or Sofia, cities where conflicting societal developments collide at full speed, more strongly than in Germany, producing images of everyday life. This triggers a reaction in me to recreate this essence on stage. For me such a space then contains so many secrets that, if necessary, you can endure even five hours of it without becoming bored. That can’t be achieved with a self-contained, finished aesthetic, only with openness and fracture.

Your stage designs are sometimes abstract and then again sometimes very realistic. Why this alternation?

One must change forms every now and then in order to be able to allude again and again to the subject matter with a certain freshness. Art does not function without disturbance. If it’s going too well, the art becomes locked. One must uncover new energies to see to the fissures. And my stage designs should do the same: Disturbances bring possibility. Thus a space does not allow itself to be immediately explained – or repeated. So in a sense, one is constantly searching for other ways. These are the test stages. Which resources are available and how can I implement them? By this I mean not just current media like video but also stories that reference the history of the theatre.

What are you testing at present?

What interests me at the moment is the juxtaposition of stage and auditorium. We always take for granted the 19th-century reality that there exists a strict separation between stage and auditorium. The room is dark while the stage is light and conveys illusion. That is an entirely youthful conception. It’s worth looking at how spectating has changed. When chairs were first placed in the pit at the Comédie Française, the audience protested because they were accustomed to standing, moving around, eating and drinking. Today it would probably be the reverse. Trying this out would make me happy at the moment. How is a different interaction possible by means of a new allocation of performance area and auditorium?

Spaces that serve a purpose
This no longer applies only to the performance hall.

Exactly, so it’s very important to me not only to be able to build Volksbühne sets in the traditional manner, but also to design other spaces in the theatre as well. As a spectator, how, for example, do I enter the foyer? Which spaces in addition to the performance hall do I include in the visitor’s theatre experience? It’s important to me to create something that can be used. My spaces should not be admired as artwork, but rather as design that serves a purpose.

Although you also work in Munich, Vienna and Zurich, Berlin’s Volksbühne is still considered your artistic home. What is special about this theatre?

The secret of the Volksbühne is that it doesn’t function as a hierarchy. You can also have a conversation about subject matter with a technician. I’ve never experienced this at any other theatre. And then a cooperation naturally emerges that is unpredictable and brings thoroughly different results than if only the director implements his fantasy.

[amazonify]3934344089[/amazonify] Bert Neumann (Ed.): Imitation of Life. Bert Neumann Bühnenbilder. Berlin: Theater der Zeit 2001, 207 pages.
Containers, plastic chairs, flowered wallpaper and fluorescent lights, plywood, DIY materials and secondhand goods will be directed to Bert Neumann’s complex architectural constructs a reality very own aesthetic of reality, where is the irony of beautiful appearance always in the picture. Big city life and his own daily life satisfying Neumann for inspiration. Our high-gloss, while throw-away society, he can shine in the light of the stage in a sublime desolation. Sun theater spaces emerge as the new town, which he developed for Castorf Dostoevsky adaptations to an entire city. Neumann’s stage sets, because images can be no question that work here as an anti-theatrical illusion. Through the use of digital media and audience perspective, variable positioning of the production of theatrical effects is always visible and tangible. Imitation of Life – the larger than life (stage) reality of his work is documented in this richly illustrated volume.

Tobias Asmuth
is a freelance journalist in Berlin. He writes for newspapers and magazines.
Translation: Jonathan Lutes