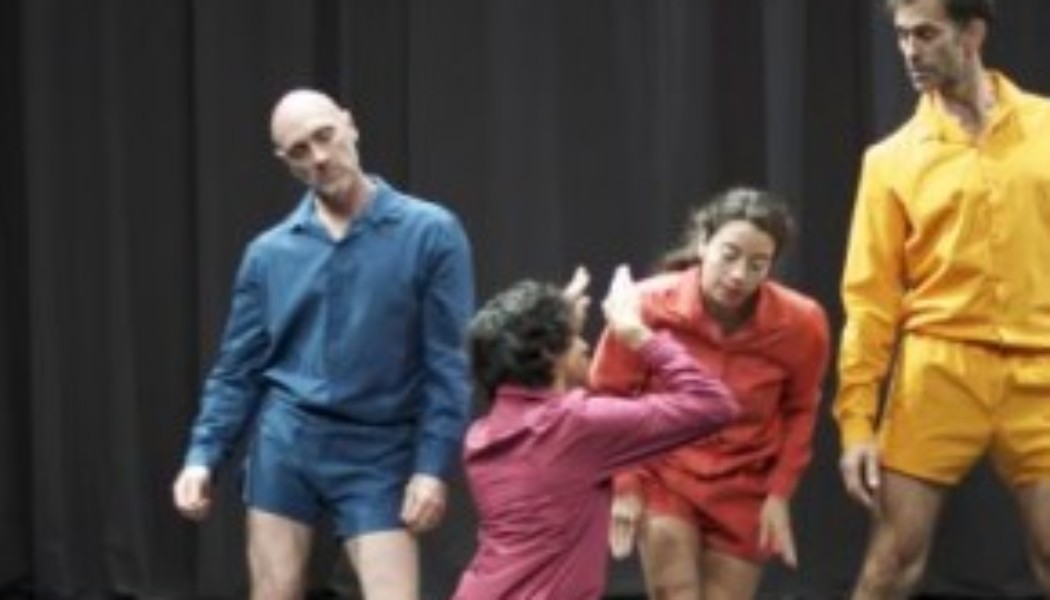 The choreography of Danza Permanente comes from a musical composition created in Vienna two centuries ago by a deaf man, Beethoven. In this new work, the score is transposed into movement for four dancers, each taking the part of a single instrument. They embody the musical structure and dynamics of the string quartet, behaving as sound, in silence. The transposition is by choreographer DD Dorvillier and composer Zeena Parkin

Danza Permanente is a human future dance corps production. Commission: The Kitchen; the French Institute Alliance Française (FIAF)’s Crossing the Line 2012; STUK Kunstencentrum; Rencontres choréographiques internationales de Seine-St. Denis; the Centre national de danse contemporaine Angers; and PACT Zollverein. Danza Permanente has received major production support from The MAP Fund, primarily funded by the Doris Duke Charitable Foundation, with additional support from The Andrew W. Mellon Foundation; from FUSED (French-US Exchange in Dance), a program of the National Dance Project/New England Foundation for the Arts, the Cultural Services of the French Embassy in New York, and FACE (French American Cultural Exchange) with lead funding from the Doris Duke Charitable Foundation and The Florence Gould Foundation, and through a fellowship in choreography from the John Simon Guggenheim Memorial Foundation. Danza Permanente was created during residencies at STUK, PACT, Performing Arts Forum, and CNDC Angers, and supported by the Menagerie de Verre, Paris in the frame of studiolabs, as well as the studios at the Centre National de la Danse in Pantin, France. The NYC performances are made possible in part with public funds from the Manhattan Community Arts Fund, supported by the New York City Department of Cultural Affairs in partnership with the City Council and administered by Lower Manhattan Cultural Council, and with public funds from the Fund for Creative Communities, supported by New York State Council on the Arts and administered by Lower Manhattan Cultural Council.

Dance programs at The Kitchen are made possible with generous support from The Harkness Foundation for Dance, the Jerome Robbins Foundation, the Mertz Gilmore Foundation, and with public funds from the New York City Department of Cultural Affairs and the New York State Council on the Arts, a state agency.

Crossing the Line is the French Institute Alliance Française (FIAF)’s annual fall festival presenting interdisciplinary works and performances created by artists from around the world in New York. The festival provides opportunities for New Yorkers to explore the dialogue between artist and participant, examine how artists help re-imagine the world, and engage in the vital role artists play as critical thinkers and catalysts for social evolution. Crossing the Line is initiated and produced by FIAF in partnership with leading cultural institutions and takes place this year from September 14–October 14, 2012.