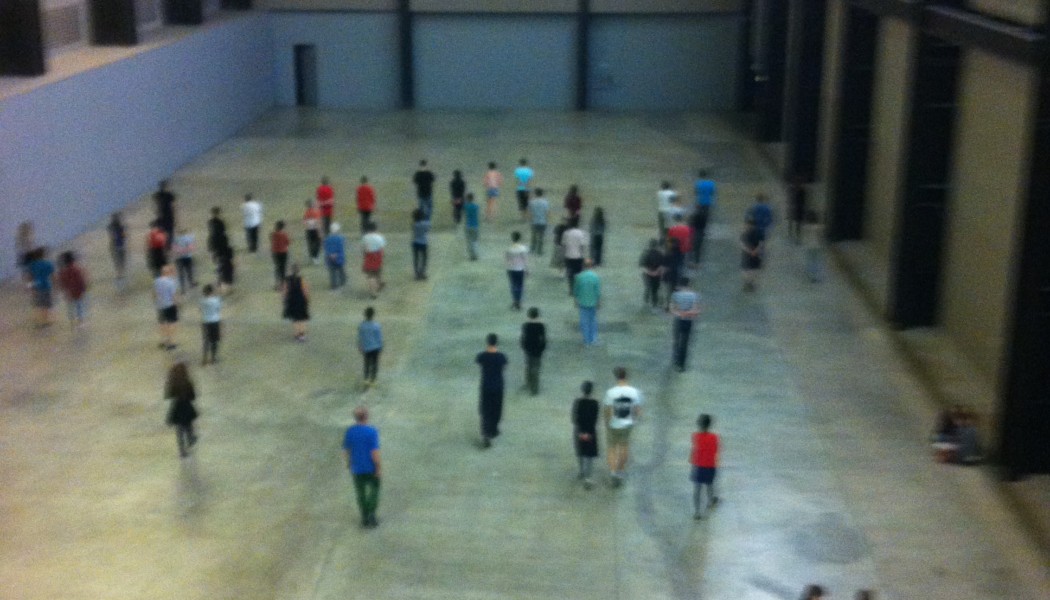 My photo from the September 17th afternoon performance of “These Associations”

Expectation was a curiosity as I read a few reviews but seen none of the video’s or photo’s related to the latest Turbine Hall commision by Tino Seghal. All of the video’s and photo’s posted are all by audience members as Tino refuses to let any photo’s, video or documentation at all be professionally released for profit. Still I had experienced some previous works of his and always been compelled by his intensive investigation of the audience/performer relationship. While not a new topic and being researched by many contemporary artists this massive show at the Tate Modern is one of the best performances of this research I have ever witnessed.
The audience choose their involvement to a point, the group of performers are a large group of plain clothes’ citizens of London who have a pattern of walking together, singing and playing a running dance game who rules remain a mystery. Although simple in its actions it spirals into complexity in it’s interactions with the audience who are at times extremely hard to pick out due to the casualness of the performers. I instantly was struck by how individual each persons experience of this durational repeated performance must be. Although I spent close to three hours at the Tate Modern I spent 90% of my time there at this piece. I had an intense and amazing conversation with a dancer who is tired of London and had actually been to where I live in Montreal. we talked about creation, being stuck in a pattern, ways to find excitment, she told a beautiful story about a friend of hers who hides none of his emotions. I heard one other story from a young girl about traveling in Europe for the first time. I could not help being equalled interested in seeing how other audience members interacted with the performers, at times effortlessly going into friendly conversations that are compelling to watch.
I became quickly addicted to “These Associations”, how pleasant it was to be in this concrete forest of humans, watching new audiences happen onto the event, their looks of wonder and pleasure, a brief sense of an urban utopia that could be possible if we actually tried to connect more on a daily basis with those we don’t know, how telling a personal story instantly opens up possibilities. The scope of the project is even more impressive considering how mainstream and touristy the Tate Modern is and how for many gallery goers this will be their first time ever experiencing a performance event like this.
Called by some critic’s and contemporary art curators a masterpiece I would not argue with them. This piece for me was one of the best examples of “relational aesthetics” I have ever seen/been involved in/witnessed.

Chad Dembski (Montreal, Quebec, Canada)
Based in Montreal, Quebec and director of surprise performance, a small, independent performance company that has produced work in Toronto, Montreal, and Cardiff, Wales. Works with other contemporary companies such as Small Wooden Shoe, Public Recordings and secret theatre. Has worked in Paris, Italy, Cardiff, NYC, Atlanta, Calgary, Vancouver, Halifax and many other cities.