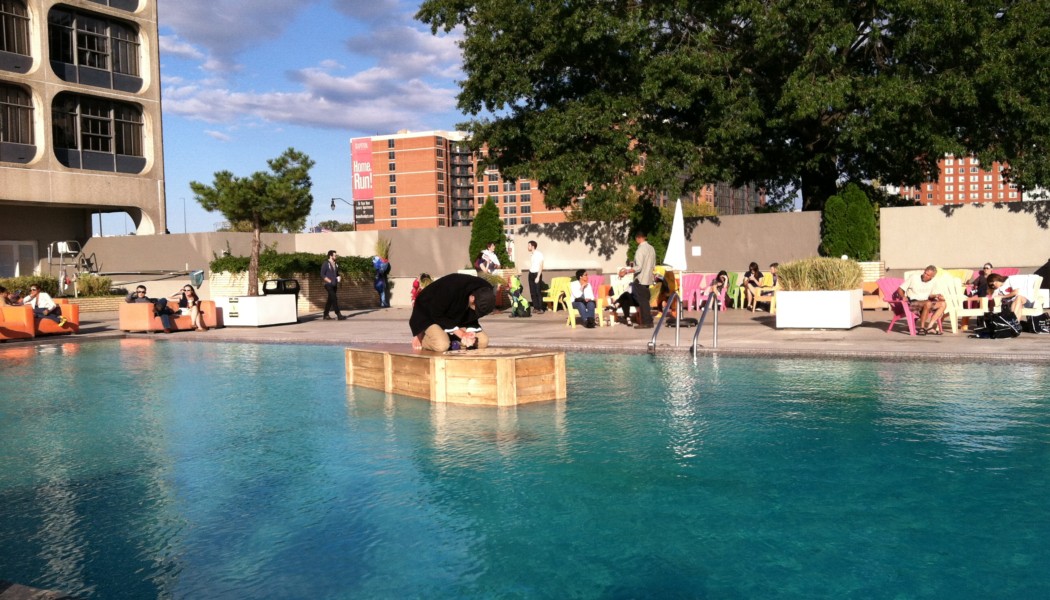 Call him Ishmael. Seriously. At 5am on a cool morning in early October, Andrew Wodzianski launched his thirty-six hour endurance performance called Self Portrait as Ishmael at the (e)merge art fair here in DC. “Launched” is not a metaphor. In the predawn darkness at the Capitol Skyline Hotel, a sixties-era time-warp, Wodzianski slipped a coffin into the outdoor pool and climbed on board. Barefoot, dressed in a 19th Century’s seaman’s jacket and khaki pants, with only a couple of bandanas as props, he floated on top of the coffin until 5 pm the following day. Underwater magnets kept the light wooden coffin gently turning in the center of the pool but it was Wodzianski’s careful movements- laying back, sitting up, stretching, kneeling, occasionally dipping his hands in the water- that appealed to me, a convergence of weighty themes and the absurdity of the reality of the performance, and it appeared to fascinate a good number of visitors to (e)merge as well- an art fair that has managed to make performance not only an integral part of its programming, but a centerpiece.

There was, for instance, J.J. McCracken’s The Huntress, which brought some in the audience to tears, (possibly especially me.) The performance was based in part on 19th century Washington, D.C. journalist Anne Newport Royall, who was punished for voicing political opinions. The set featured a tall interpretation of a ducking chair, Royall’s punishment device, and a bed of broken eggshells from which McCracken, in a long white dress, and another female performer arose as the performance began. Then from the seat of the tall chair, the other performer, McCracken’s sister, fidgeted with a radio playing the sound piece, a cacophony of voices talking about women, from Rush Limbaugh to journalist/activist Lydia Cacho Reberio. McCracken told me, “I wanted the piece to weave different time periods together so I could look at the history of women’s speech in the context of the soundscape, made of recent soundbites or on-air discussions of women being punished, chastised, or silenced for speaking out.” McCracken was strapped into a mask bridle with a mouth bit gag attached to a rusted chain. When the chain was attached to the leg of the chair, McCraken began to pull against it, crashing back against the wall each time it broke. Again and again, the chain was reattached by assistants. The assistants, wearing white jumpsuits, then stripped her of her 19th Century gown and redressed her in a black contemporary business suit, forcing her body into a fists-on-hips power pose.

Meanwhile, out on the pool deck, Mandy Cano Villalobos dealt with similar themes in her ongoing project Voces. In connection with a shrine in the style of a Mexican altar overflowing with candles and offerings, Villalobos spent the entirety of (e)merge embroidering the names of femicide victims of Juarez, Mexico onto white shirts. The white shirts themselves referenced the body, while the embroidered names, obtained form Amnesty International and blogs that track obituaries, memorialized each murdered woman as an individual.

At the start of Down in the Valley, Sheldon Scott handed out sealed envelopes addressed to “you,” solemnly instructing each audience member not to open it until the end. He then recited a reinterpretation of Martin Luther King Jr’s Letter from Birmingham Jail, adding to it a personal narrative, and sang Down in the Valley, while a projection behind him flashed images culled from popular culture, and a tall suited man in wayfarers and silver glitter platform heels held a noose. Leaning forward, with the noose around his neck, Scott then asked the audience to open the letters and answer the questions, which all read “One line to my unrequited love” and “One line to make them stay.” and personally hand each letter back to him. The performance chillingly combined lynching, auto-erotic asphyxiation, and the enormous suicide rate in connection with the current war.

In a performative installation, Made in China, Joyce Yu-Jean Lee operated a cart from which she sold for five dollars small red and gold packages, manufactured in the United States and branded with a logo combining the star of the American flag and the Apple logo. Inside the package was a button, saying “Made in China. Bought in the USA.” and text Chinese characters that said the same thing. Using a commercial exchange as the basis for interaction with the artwork was especially fitting in the context of an art fair.

Chukwuma Agubokwu, Holly Bass, and Katie Kehoe each employed story telling, however differently, as an integral part of their performance. Agubokwu’s Portrait of the Artist as a Greek Myth told a saga of failure at last year’s (e)merge, in which everything that could have gone wrong, did, including a car crash. He invited individuals to casually include their perspective of the events, including past and present (e)merge artists Wilmer Wilson IV, Chajana DenHarder, Ian McDermott, and fair co-organizer Jamie Smith. Agubokwu illustrated the lecture-as-performance with drawn-on photographs on presentation boards, and ended by describing himself as a phoenix, fulfilling his own prophecy with the completion of this year’s performance..

Holly Bass twice performed her piece Come Clean, in which she invited strangers to participate in washing her hair in three different stages while sharing personal stories and small talk. Participants concocted their own shampoo and conditioner from provided materials, and audience members were encouraged to chime in at will.

Incorporating improvisation and absurdity, Katie Kehoe performed Mary Ellen Likes Free Magazines intermittently throughout the fair at various locations. Mary Ellen is a “transient character,” a persistent traveler who collects free tourist guides, brochures, anything printed and free, and uses them to attempt to understand her locale. In an exaggerated Canadian accent, Kehoe as Mary Ellen talked about how a DC history pamphlet led her to believe that at one time there were no women in the city because no women were pictured in the pamphlet, and how a vegan guide brought her to the conclusion that everyone in DC is vegetarian. Because of her fondness for things free, she also distributed tote bags and beer koozies emblazoned with “Mary Ellen likes things free” so that audience members could to collect their own free materials, and share her fondness for beer.

Taking comedy and the absurd as a more central theme of his performance, Ian McDermott‘s A Brief Demonstration of Interface Theory began as something of an ode to the Gaston’s opening song in Beauty and the Beast. Performed at the outset for the “wrong” audience, the piece unraveled in layers, collapsing when a planted towns person, the butcher, informs McDermott/Gaston that “Bon Jour” does not mean “hello,” but “goodbye.” The performance then shifted from spectacular musical to a concert incorporating the artist’s own sculptures, including a string instrument hat stand, and a guitar/stool. Finally McDermott led the audience to the pool deck, and to a hammock wired to play sound in response to the body lying in it.

In stark contrast to McDermott’s elaborately scripted and perfectly timed musical performance, Chajana denHarder performed a piece in the pool more minimal than Wodzianski’s Self Portrait as Ishmael. In Singularity, denHarder attempted to perform a kind of watery stasis, simply floating in the pool in a black bathing suit with a clear inflated ball. She performed Stasis on Thursday during the opening party, beginning and ending after dark, and again on Saturday beginning in daylight and ending at after dusk.

But the most surprising performance at (e)merge was Andrew Schrock‘s immersive performance space installation in the garage area exhibition space. A surprise in part because it wasn’t listed on the performance program on the (e)merge website, but also because of its earnest embrace of fantasy as a lifestyle. On his exhibitor’s plaque, the New Orleans-based artist’s work was titled Large-Hadron-Collosus and the White Snake, next to which the artist had taped a hand-written performance schedule, featuring daily performances of Universal Procession and a final performance of The White Snake by collaborators Vanessa Cronan and Amanda Stone. The installation was made up entirely of materials from an abandoned-space takeover in Richmond, and the performances were firmly rooted in ceremony and ritual, although with a vagabond, Peter Pan Lost Boys spin. The White Snake is a healing ritual in the form of a Butoh dance. On his website Schrock writes, “We dream of art as an on-going daily action that creates a spirit of togetherness and solidarity in a practice of being in the present moment.”

Through its full and varied performance schedule, D.C.’s (e)merge art fair was able to do just that, create a spirit of togetherness and solidarity through works that were present, absorbing, and in opposition to the more typical market-focused construction of an art fair, by emphasizing the ephemeral and noncommercial. A celebration of being in the present moment, even when the moment was thirty-six hours long.

Eames Armstrong (Washington, DC)
Eames Armstrong is an interdisciplinary artist and curator. She is the founder and director of the free-form project-based arts initiative Aether Art Projects which emphasizes experimentation, performance, and collaboration through exhibitions, events, and DCperformanceart.tumblr, the only active blog dedicated to performance art in DC. Armstrong is the performance coordinator at Hillyer Art Space, where she programs Soapbox, a monthly performance art series. Eames received her BFA from The School of the Museum of Fine Arts, Boston, in 2010 where she studied studio art, with emphasis on painting, writing, and performance. She currently lives in DC and works out of the 52 O Street Artist Studios.