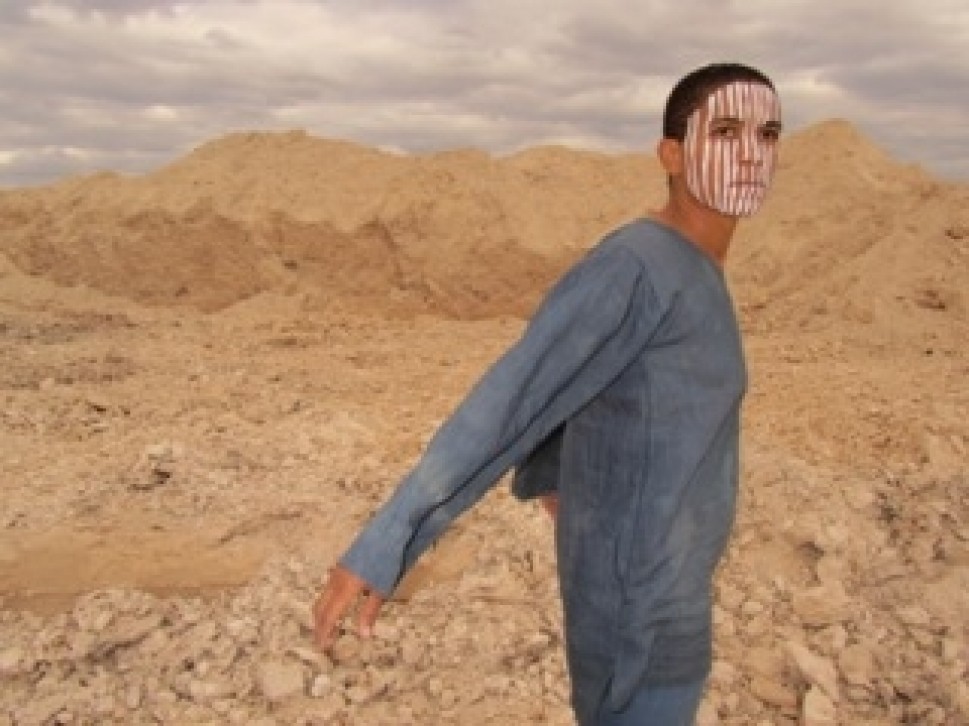 Body and Screen is on view at the Gaddis Geeslin Gallery at Sam Houston State University from October 1 through October 26, 2012. This selection of performance videos is curated by Annie Strader.

According to Strader, “The works included in the exhibition navigate a wide conceptual terrain offering a sampling of works by artists who use the camera to capture fleeting moments and the screen as a window for the viewer to stand witness.”

Adán De La Garza recently graduated with an MFA in Interdisciplinary Media Arts Practices from the University of Colorado at Boulder. He has participated in exhibitions at the Boulder Museum of Contemporary Art (Boulder, CO), The New School (New York, NY), The Future Gallery (Berlin, DE) and the Tucson Museum of Contemporary Art (Tucson, AZ). De La Garza is currently based in Nashville, TN where he teaches at Watkins College of Art, Design and Film.

Tobias Fike and Matthew Harris first began collaborating through a chance occurrence. After video taping a performance piece of Matthew’s, Tobias kept the camera rolling and decided to retrace the long winding chalk line that had been made. Tobias’ instinctive decision resulted in an abstracted documentation that both artists felt better captured the experience than the standard footage. Finding their approaches, aesthetics, and interests, to be complementary, they decided to deliberately pursue collaborative projects together. This has lead to many adventures such as trying to reach the horizon by standing on each other’s shoulders, dragging each other through the desert, and “shadow” wrestling. Often taking the form of videos and photos depicting “actions” they perform together, their work highlights ideas of masculinity, childhood play, and collaboration itself. Their video work was recently featured at the Fonlad Digital Arts Festival in Coimbra, Portugal and Vertigo Art Space in Denver, CO.

Kate Gilmore received her BA in 1997 from Bates College and her MFA in 2002 from School of Visual Arts. Her work has been shown nationally and internationally, most recently at the 2010 Whitney Biennial, Whitney Museum of American Art, the Brooklyn Museum, PS1/MoMA, The Kitchen, Indianapolis Museum of Art, Public Art Fund Project (Bryant Park), Parasol Unit (London), San Francisco Museum of Modern Art, and Museum of Contemporary Art (Chicago). She is the recipient of the Rome Prize from the American Academy in Rome, the Louis Comfort Tiffany Biennial Award, the Lower Manhattan Cultural Council Award for Artistic Excellence, the Franklin Furnace Fund for Performance, the LMCC Workspace Residency, the New York Foundation for The Arts Fellowship, and the Marie Walsh Sharpe Space Residency. Her work is in the collection of the Museum of Modern Art, New York, the Brooklyn Museum, Whitney Museum of American Art, Museum of Fine Arts, Boston, San Francisco Museum of Modern Art, Indianapolis Museum of Art, and Museum of Contemporary Art, Chicago.

Casey McGuire was born in Shrewsbury, Vermont. The daughter of a taxidermist and decoy carver she was subject to object making at a young age. Growing up in Vermont has left a lasting impression and fuels the work produced today. McGuire received her BFA cum laude in Studio Arts from Alfred University; She received her MFA in 2007 from the University of Colorado, Boulder. In May of 2009 she was a full fellowship resident at the Vermont Studio Center in Johnson VT. She has exhibited widely, at the Diary Center for the Arts, Boulder, Colorado; The Arvada Center, Arvada, Colorado. In 2010 she had solo exhibition at the Urban Institute of Contemporary Arts in Grand Rapids Michigan. Recently she was featured in the October 2009 issue of Sculpture Magazine. She currently is an Assistant Professor at the University of West Georgia, Carrollton.

Wura-Natasha Ogunji is a visual artist and performer. Her works include videos in which she engages her body in explorations of movement and mark-making across water, land and air. Ogunji is a recipient of the Guggenheim Foundation Fellowship, the Dallas Museum of Art’s Otis and Velma Davis Dozier Travel Grant and is a selected Artist in Residence as part of the National Performance Network’s Visual Artist Network. She has participated in residencies at Can Serrat in Spain and Altos de Chavon in the Dominican Republic and has received grants from the Idea Fund (Houston) and The Pollock-Krasner Foundation (New York). Her performance videos have screened at the Australian Experimental Art Foundation (Adelaide), Exit Art (New York), Arthouse at the Jones Center (Austin) and in Palestine as part of the Video Art Festival /SI :N/2. Ogunji’s performances include ‘There are drummers coming for me’ (Women and Their Work), ‘one hundred black women, one hundred actions’ (Fusebox Festival) and most recently ‘Will I still carry water when I am a dead woman?’ which she performed in Lagos, Nigeria. Ogunji has a BA from Stanford University (Anthropology) and an MFA from San Jose State University (Photography). In 2012 Ogunji was the recipient of the John Simon Guggenheim Memorial Foundation Fellowship which will support the creation of a series of performance videos entitled Mogbo mo branch, a Yoruba phrase meaning I heard and I branched myself into the party. Mogbo mo branch will build upon on her previous performance investigations which create connections between Africa and the Americas via the black female body/bodies.

Linda Post explores how perception and individual position can be examined through experiential video installations, sound works, media sculpture and photography. Often in site-specific projects, a choreography of the everyday emerges as simple everyday actions are performed and systematized. Her projects have been presented at various venues including MOMA, the Sculpture Center, PS.1 Contemporary Art Center and the Hirshhorn Museum.

Tatiana Svrckova was born in Cadca, Slovakia. She has attended Josef Vydra’s School of Applied Arts in Bratislava, Slovakia with an emphasis on design, technical drawing, figural drawing and typography. Her work was shown at the International Poster Triennial in Trnava, Slovakia. Later she studied at University of Matej Bel in Banska Bystrica, Slovakia, double majoring in Art and English language/literature. In 2008 she moved to the United States to live with her sister and earned her BFA from Wichita State University in Kansas with an emphasis in new media. In 2012 she earned her MFA in the Art and Technology Department from The Ohio State University, Columbus, Ohio. Svrckova is currently a Visiting Lecturer at Brigham Young University in Provo, Utah.

Body and Screen, curated by Annie Strader, at Gaddis Geeslin Gallery at Sam Houston State University is open Mondays through Fridays from 12pm to 5pm, and is located at 1028 21st Street, Huntsville, Texas 77340 and is free. For more information, please contact Annie Strader at: anniestrader@me.com