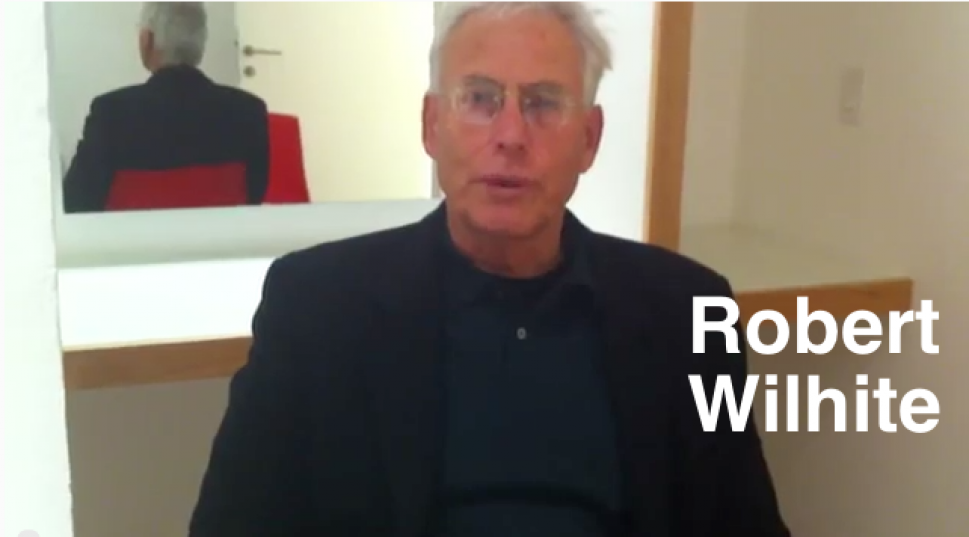 At first, when I called the corresponding area of the Jumex Collection to set up an interview with the members of IGLU I was expecting to talk with Davitt Felder the director of the performance, and maybe in a quick dynamic get to pop one question to each person involved in the performance. I was 30 minutes earlier at the Tamayo Museum so I waited. Around 10:00 a.m. the museum staff started arriving, including a tall, white-haired, interesting looking man that made his best effort to wish me a good morning in Spanish.

No more than 3 minutes later the police officer told me that one of the “persons of the performance” just came in. I went to the auditorium to find a perfectly built stage that reminded me the late70’s. There I found the same man who entered with members of the museum earlier; everyone was aware of what he needed, so I thought he was one of the persons I was looking for. He introduced himself as Robert Wilhite, I was a little bit shocked because I wasn’t expecting to find him there.

This January Robert was invited to Mexico to support the events around the work of Guy de Cointet. These are promoted by “La Colección Jumex” and started in the second half of last year.

Performance is a very young expression, is obvious if people accept that is more considered a branch of contemporary art than of modern art. History of Performance doesn’t count with the lengthy resume of traditional art, but what lacks in amount is concentrated in development of conceptual structures. The same fact that rules traditional art applies to Performance, it´s not possible not be judge and jury; that´s why time points the moment to find the work of contemporary artists as background of transcultural era. It seems that history has become compressed by conceptual art.

When I asked Robert about his role as musician (composer) in his work, he answered that the importance of the elements of sound in the performance is matter of conceptual sense, both in its presence and in its absence. He´s obviously not trying to be a musician, he composes the performance by use of sonorous, visual and theatrical rhythms.

Art is lucky to be able to build analysis of Performance through its more immediate references, in matter of fact that’s almost natural. In the virtual compression of time, peculiar in contemporary art history, the links between “now” and “then” are in force. It seems they walked time.

Robert Wilhite, worked with Chris Burden and Guy de Cointet, exposed at Larry Gagosian´s first gallery project and his personal work it´s a note of the use of presence and design of silence.

Thanks to “La Colección Jumex” for supporting the meeting with Robert Wilhite.