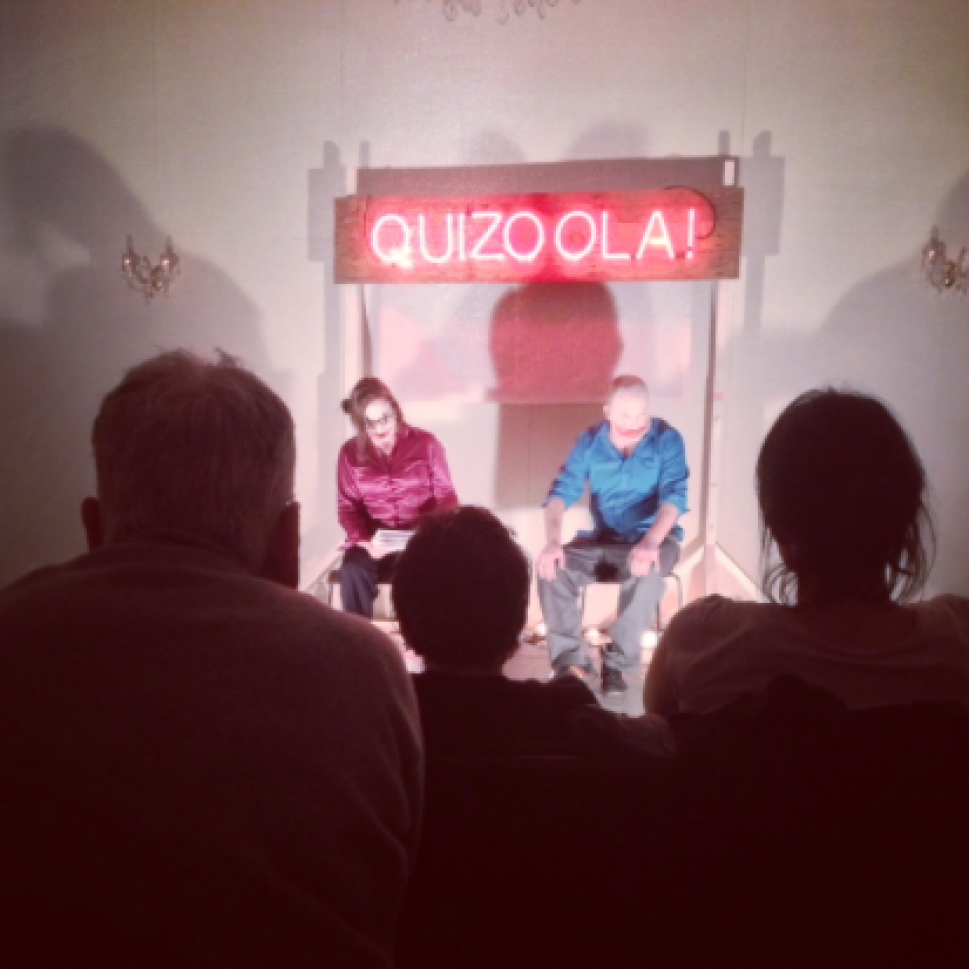 Although, I have many reservations about the relevance of Forced Entertainment’s work as ‘experimental’ I was pleasantly surprised and challenged by the presentation of this work in a 24-hour durational version. The form of the work is simple; there are 6 performers, one stage, two chairs, a circle of light and many, many questions. Only two performers occupy the stage at one given time, with a new performer entering every two hours in order to take over from the performer who has been sitting for four hours. One performer asks the questions and the other performer answers – this relationship changes with the asking of the simple question, are you ready to stop? Before the performance took place the company had asked for questions to be submitted to them, as it was for so long they needed much more content than they would usually need for the normal 6-hour show.

I am going to examine the performance under three areas; duration, content and performer/ audience relations. The foregrounding of duration within performance is particularly pertinent as it challenges both the performers and the audience / participants. Much of Marina Abramovic’s work uses the notion of duration as a means to challenge what it is to be performing; duration brings about change, there seems to be a point where any conscious efforts to be ‘performing’ seem to break and we see a change in the way that the performer is behaving perhaps we are able to see a ‘true’ self at this moment (I use the word true with reservation, as of course there are always multiple versions of a truth). This was very much the case for ‘Quizoola’, as tiredness set in the performers began to lose some of their ‘performative’ behaviour and we were able to see them break in what they were doing. This was not all the time only in small moments were we able to experience this. What is most interesting for me, as a performer is that when you are performing durational, your sense of time is lost and what could feel like 10 minutes begins to be the same as one hour; I found this was also the case as an audience member in this performance, when I returned on the second day I arrived at 1pm and I remember thinking when I looked at my clock and only ten minutes had past that I wasn’t going to be able to make it through the remaining 11 hours. However, I did and with relatively fair ease.

Once you allow yourself to be immersed into the flow of the performance then time becomes senseless. After all time is only a social construct, which allows us to manage ourselves, once these things are removed, it allows for a new becoming. ‘The Pit’ at ‘The Barbican’ was the perfect setting for this because, as an underground bunker, we were further withdrawn from our understanding of time as there are no windows in both the performance space and the café and corridors surrounding.

The answers to the questions were not pre decided and a majority of the questions were ones which had been selected by the audience, this teemed with the fact that the questions were chosen at random gave a sense of improvisation and uncertainty. The performance and the performers were in a constant sense of flux. I enjoyed watching the way that the two people worked together I asked myself; which my favourite pairing was and why? What it would be like for me to be sat there? Whom I would want to be sat there with? Some of the questions were in several parts and required a much more in depth answer and some were just simply required yes or no. Watching the performance I also found that I was thinking about what makes someone want to answer a question as in some cases there would be a number of questions asked in concession, which seemed to be almost overlooked until a question was settled on, perhaps this was a pre decided performance technique? Was this a case that the person answering was waiting for a question they wanted to answer or was it to do with the way the questions were being asked or was it both? I also liked the way in which some of the questions were related to previous answers. An example of this was when one performer had said something about making her boyfriend wear pink pyjamas, which was referred back to a number of times.

The relationship between performer and audience was both interesting and vital for the success of the piece. The combination of duration and the way that the audience played a specific roll was interesting around the work. We were positioned in such a way that the audience were placed around a semi circle of lights, which had within the two chairs and the performers (a circle of attention). We were informed beforehand that we were able to sleep throughout the performance and were able to come and go as we pleased. I think that it was to do with this openness that meant that the normal rules of traditional performance viewing were broken down. There was a lot to be said about the freedom we were given to move and sleep at our own leisure in the way that we were able to engage with the work rather than distract I think that this freedom allowed us more of a chance to engage.

On reflection, it was perhaps that for the reasons stated I felt like I was part of this performance as opposed to other Forced Entertainment work where I have felt as though I was a spectator. It could be because of this reason that I am less able to reflect on the work in a more critical way, simply because I was a part of it and the experience created a change within me, the length of the performance was most significant in this feeling. In my opinion Forced Entertainment should create more work that moves away from the more theatrical and focus much more on the work that challenges notions of time and place.