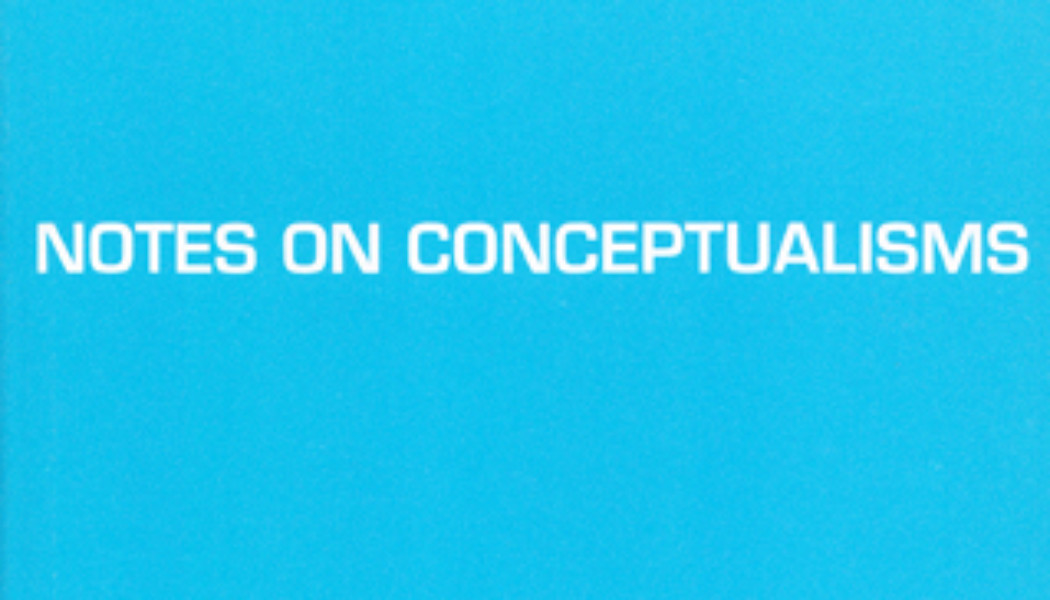 Robert Fitterman and Vanessa Place‘s Notes on Conceptualisms is not strictly a text on contemporary performance. However, this little manual/poem/theoretical document pertains directly to conceptual performance and conversations emerging across performance fields, especially amongst playwrights.

What follows, then, is a collection of notes, aphorisms, quotes and inquiries on conceptual writing. We have co-authored this text through correspondence, shared reading interests, and similar explorations. Notes on Conceptualisms is far from a definitive text, and much closer to a primer, a purposefully incomplete starting place, where readers, hopefully, can enter so as to participate in the shaping of these ideas.

“The petite, wallet-sized book fits perfectly to that impulse that the tree, in fact, did fall in the forest. And, you should go see where the hell it fell.” —COLDFRONT

“For those not familiar with conceptualist practices in poetry, I can recommend few better places to start than Notes on Conceptualisms.” —THOM DONOVAN for BOMBLOG

“But it’s a book you’re going to want to carry around with you as you go about your daily business, being the most ambitious & serious account of the dynamics underlying emergent poetics in the United States I’ve encountered in years.” —RON SILLIMAN

Robert Fitterman was born in 1959 in Creve Coeur (broken heart), Missouri. He is the author of 10 books of poetry, including 4 installments of his ongoing poemMetropolis: Metropolis 1-15 (Sun & Moon Press, 2000), Metropolis 16-29 (Coach House Books, 2002), and Metropolis XXX: The Decline and Fall of the Roman Empire (Edge Books, 2004) and, forthcoming, Sprawl: Metropolis 30A (Make Now Books). Also forthcoming is rob the plagiarist (Roof Books)—a collection of essays, conceptual writing, and other writings generated by plagiarism and appropriation. Several of his books are collaborations with visual artists, including war, the musical with Dirk Rowntree (Subpress Books) and The Sun Also Also Rises with Nayland Blake (No Press). He lives in NYC with poet Kim Rosenfield and their daughter Coco. He teaches writing and poetry at NYU and in the Bard College, Milton Avery School of Graduate Studies.

Vanessa Place is a writer and lawyer, and co-director of Les Figues Press. She is the author of Dies: A Sentence (Les Figues Press), a 50,000-word, one-sentence prose poem, and the post-conceptual epic La Medusa (Fiction Collective 2). Her nonfiction book, The Guilt Project: Rape and Morality will be published by Other Press in 2010. Place is also a regular contributor to X-TRA Contemporary Art Quarterly, and is collaborating with Los Angeles conceptual artist Stephanie Taylor on the film Murderous Squaredance at the Spiral Jetty. Place is co-founder of Les Figues Press, described by critic Terry Castle as “an elegant vessel for experimental American writing of an extraordinarily assured and ingenious sort.”