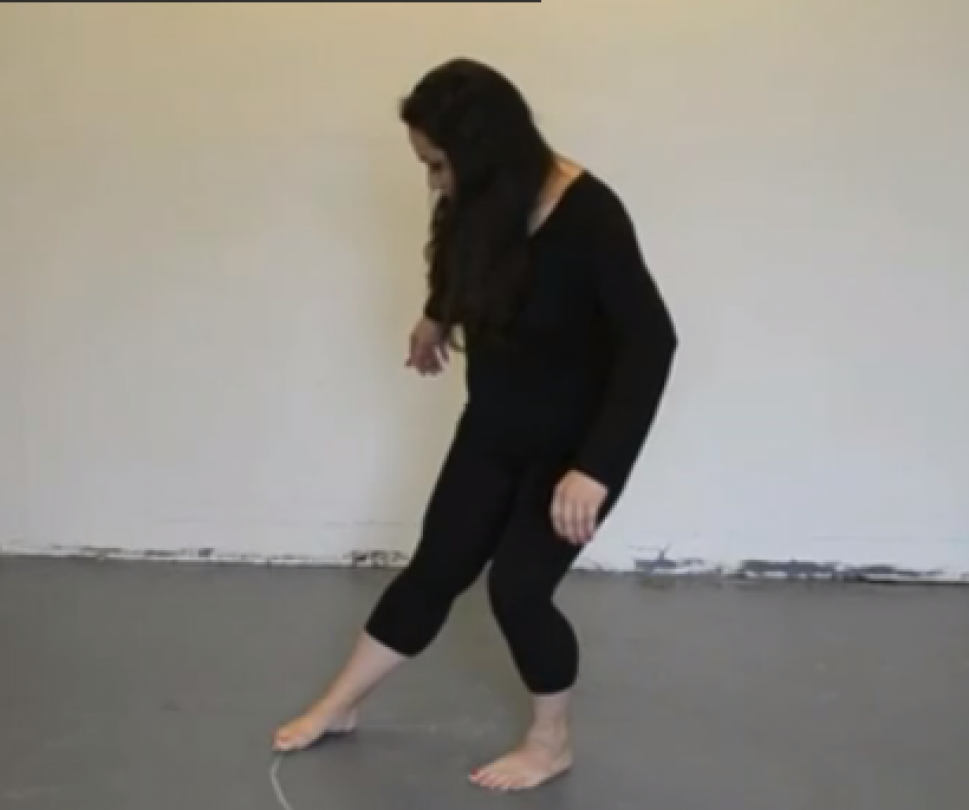 Hilary Scullane is an interdisciplinary artist who was born and currently lives in Houston, Texas. She utilizes performance with sculpture and video to explore issues within social and personal realms. Her body is her primary tool. Using personal narrative as her starting point, she “pulls from the quotidian for material.”

Having heard about performance art in art school I had never attempted, nor really considered the form and I think that’s because I didn’t know anyone else in school that was practicing it or supporting it. It was merely something you read about in some of the required reading in your art history courses or briefly heard your professors talk about in lecture. But I was definitely curious about it, maybe mostly intimidated because the more I thought about it, it seemed like and is to me art making in its purest form.

So back in March of 2011, I was invited by a long time friend and artist, Jonatan Lopez to a performance art workshop. It was being held in Houston’s northern end at a popular alternative art and music venue called, The Jenner House. Julia Claire Wallace, a leader in the Houston performance art scene, was facilitating it. So I went and broke my performance art virginity by participating in collaboration with Lopez titled, “Waiting for the Unknown.” I sat in a chair blindfolded and duct taped at a conspicuous street corner to literally expose myself fully to literally hence the title the unknown. Now looking back on it, it definitely was highly inspired by Marina Abramovic’s, Rhythm 0, and for my first performance piece I would say that was definitely daring!

I was hooked. I continued to go to the weekly workshops that month and by the end of it I found myself with a new circle of friends and apart of a newly formed performance art collective called, Continuum. That was over two and a half years ago and we’re still going strong. A matter of fact some of our original members have moved but we still find ways to connect, even if it means live streaming performances threw various media and projecting it.

Describe one of your works/projects.

I’ve been mostly interested in performance works from the nineteen sixties and seventies and have lately been pulling a lot of inspiration from artist Bruce Nauman. I came upon his work when I had found myself in a stump like most artist find themselves in from time to time. I was having to create work at an incessant rate and was running on empty and loosing focus. I had stumbled across a Nauman quote that just resonated with me and freed my mind. Nauman simply says, “If I was an artist and I was in the studio, then whatever I was doing in the studio must be art. At this point art became more of an activity and less of a product.” So I immediately began to explore my studio and the materials within it and found myself in a way re-performing or approaching a performance like Nauman would. In Walking In an Exaggerated Manner Over and Around the Area of a Circle, 2013. I pulled from Nauman’s well known, Walking in an Exaggerated Manner around the Perimeter of a Square, 1967- 68. Instead of a square I choose a circle and instead of just covering the Perimeter I also covered the area.

I continued to explore Nauman’s simplicity and ease and use of materials but I also found that I enjoyed the almost awkward and sometimes physically challenging aspect of it. So I then played a little more and conceived, untitled (duct tape), 2013, a piece in which I incorporated a bit of collaboration when I incorporated two others and instructed them to duct tape the inside of a shipping container however they wish. They were each given different colors of duct tape so that once I began performing within the space and with the duct tape I could distinguish and select one color for my hands and the other for my feet. The piece which became very physically challenging at times gave me such a great sense of accomplishment for having been able to accomplish a task at which I had given up all control of and then took control of. At times I found myself climbing up the wall with my feet, falling down, getting back up again and again and until I could do it and all the way to the end. I then allowed others to try.

One of the most important lessons I have learned in my journey through performance art is to really and truly listen to your subconscious, those messages we get that come in images, ideas, urges and random thoughts in our head. Write them down, do them, weird or not! There is a reason why they come and we need to release it.

All kinds of things but a majority of the inspiration comes from internal conflicts within myself.
I’m also inspired by performance artists within the Continuum Performance Art collective I’m a member of as well as those I’ve read about in art history books like Marina Abramovic, Trisha Brown, Karen Finley, The Gutai Group, Rebecca Horn, and Bruce Nauman.

Hilary Scullane has exhibited works in numerous group exhibitions such as The Orange Show for Visionary Art, D!verseworks, and the Houston Museum of African American Culture. She was a Summer Studios artist at Project Row Houses, a prestigious residency program in Houston’s Northern Third Ward, during the summer of 2012. She received her BFA in Sculpture with a minor in Art History at The University of Houston in the spring of 2013.