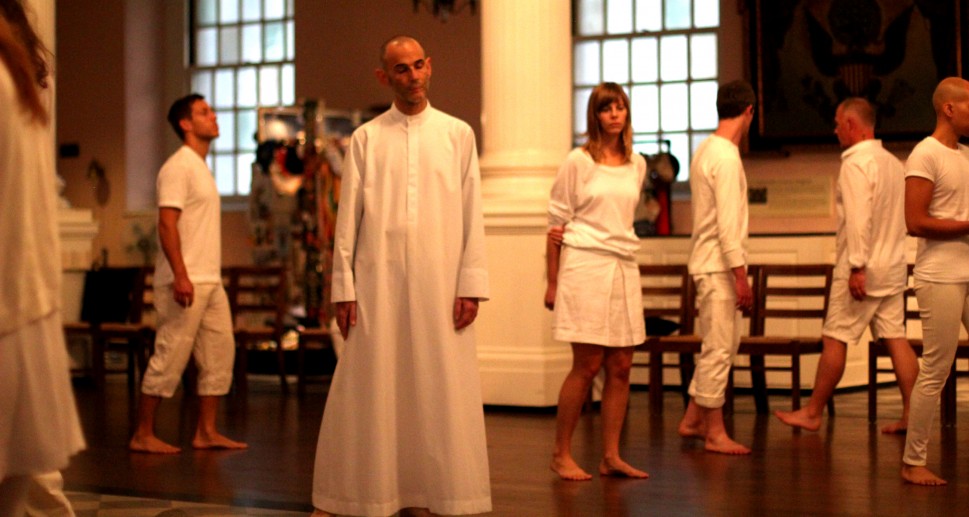 above: Ernesto Pujol surrounded by his performers, dawn | photo by the author

An Exercise in Reverence, Patience, and Force

How is one meant to wrap words around an experience that exists beyond our humanly agreed-upon notions of time?
Durational work has become a contested milieu for both performers and critics, becoming at times as formulaic as the structure it is attempting to do away with. Yet, when executed with the grace and conviction of Ernesto Pujol, it gains otherworldly powers of space and time manipulation, inducing a sense of deep reflection, of forging forgotten links, memories, future nostalgia. It is so rare these days to enter a space that has been so profoundly altered and warped by so little. Between twenty-five and thirty-five performers walk in a circle backwards slowly, wearing white, eyes flickering between open and closed, a gaze of certainty, devotion, and divinity washing over not only themselves, but all those surrounding them. A slowly oscillating galaxy grew and contracted, many eons might have passed, or all of them shed away into insurmountable fragments and flakes of remembrance for things passed and moments yet to happen.

I want to say that Pujol created a holy space. It was not the sort of holy space mired in centuries of strife and war, but rather a space that called out for a deeper sense of one’s humanity, in whatever form it may manifest itself within a viewer. I do not wish to turn this review into something about my own personal experience, but I was inundated with an overwhelming geist of closure, as if many loops had been tightened into place, everything in its right place, glowing. That it made me able to enter into the elusive hyper-space, a space of mind when all previous thoughts, memories, and hastily disposed-of particles accumulate wildly and flood an unconscious periphery only to fall into their rightful place. Clarity for once within the cacophony of modern living.

I first entered St. Paul’s chapel, World Trade One towering monumentally a couple of blocks West, at 11pm on Thursday night, the performance already a good twelve and a half hours in. I should note that I went immediately following the multi-media disaster of Massive Attack V Adam Curtis. (you can read that review here) Entering the space, one notices immediately that something was divinely other. Of course, the performance was one that placed the performers in a suspended bubble of time above anyone else, they were the engines of this self-contained constellation. However, their presence did not end within their own bodies, it manifested itself inside of the entire space. They did not simply occupy St. Paul’s Chapel with their bodies, they became the space, manipulated the space as well as the entire notion of time we too easily agree to follow. It was a deeply personal experience sitting in that chair, outside stimuli never completely left but they certainly entered into a realm of soft white noise.

I decided to return the next day at dawn for the crucial moment when the internalized and manipulated space/time of St. Paul’s Chapel would meet the beaming elegance of the liminal moment only available to us as the first glimpses of sunlight begin to take the place of the city’s light polluted strawberry skies. The performers continued in their quiet force. Not so much in a showing of perseverance, but liminality. The strongest force that they were able to expel did not come from their individual journey of the past twenty hours, but rather their shared embodiment of a temporary space. It was truly autonomous and sacred.

above: Video excerpts of Pujol’s work | video by the author

It is quite a pity that durational work has gotten to such a point of vogue that commercial artists (musicians, painters, actors, etc…) have so sullied the form with the attention they receive. It is an uncalled-for accusation on the craft of the durational artist, one that screams I can do this too and better! Yet the strength of this type of durational performance does not rest in its publicity-making capacities. It is about truly harnessing the force inherent to time-based work, which is to actually manipulate space/time. It is often overlooked, but this type of work has the true potential to instill the most profound type of perspective-shift in any viewer. It is not about a preaching, booming voice calling for an awakened public, but rather about creating the space/time to achieve an internalized/unsullied confrontation with the deeper elements of one’s own. And in a culture where we are so often forced to digest and dispose, Ernesto Pujol gracefully asks us to reconsider, to dismantle, and to reconstitute memories within ourselves. It is a quiet revolution, but it may be the strongest way to resist and to rebel.