In Performance: Royal Osiris Karaoke Ensemble’s The Art of Luv (Part 1) at Under the Radar Festival’s Incoming! Series 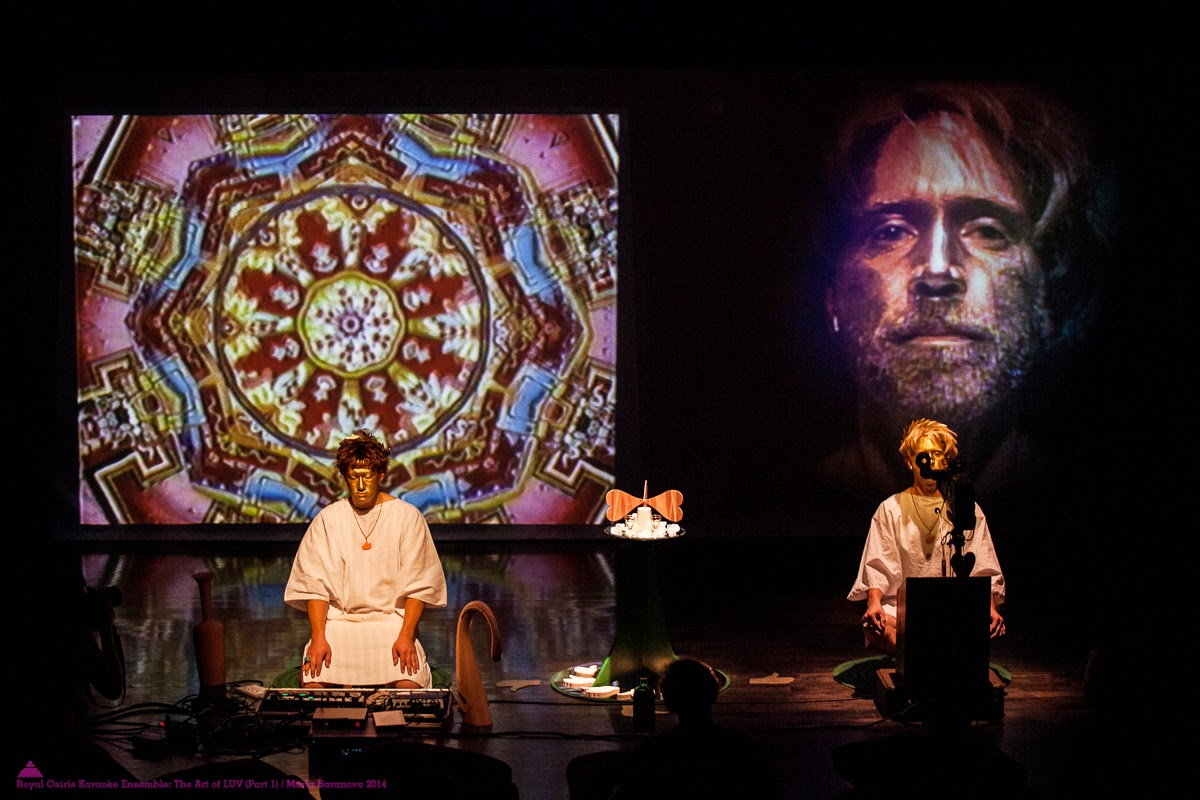 Royal Osiris Karaoke Ensemble is a “musical priesthood” composed of Tei Blow and Sean McElroy, dedicated to exploring “the metaphysics and mythologies of love, desire, and courtship at the end of the 20th century.” Operating from within an aesthetic territory of 1970s instructional videos, New Age music, home movies, and kitsch, glossed with metallic gold paint, ROKE’s performances are framed as rituals for the modern age.

The Art of Luv (Part 1) is a response to the May 2014 misogyny-driven killing spree of Elliot Rodgers, “performing humanity’s common search for love even as we misunderstand it.” Beginning with the language of guided meditation, Luv creates a space of calm and consideration, which ROKE then exploits to take the audience on a slyly uncomfortable and disconcerting trip.

Re-performing material from videos of TV programs designed to help viewers date and ‘get laid’ (the explicit audience for these programs is always male), Blow and McElroy alternate speaking directly into the lens of a live-feed video camera, deadpanning their way through the material as the original video plays on an adjacent surface in near-perfect synchronicity. We are implicitly invited to laugh at the superficiality and absurdity of these programs (and the juxtaposition of the content with the uber-sincere delivery is occasionally hilarious). Gradually, these videos become interspersed with YouTube videos of women giving advice to other women; these are more nakedly poignant. In one, a young woman tearfully advises girls to be careful about who they date, lest they end up tied to a random guy forever simply because they share a child.

Elliot Rodgers’ pre-killing self-recorded videos enter the picture and come to dominate the repertory. He never references his planned violence, instead talking about how “unfair” it is that women never pay attention to him, or “give [him] a chance to show that [he’s] worthy of them,” how alone and frustrated he feels, since he tries so hard to be attractive by buying expensive sunglasses, driving a fancy car, and being “a perfect gentleman.” The studiously neutral performances of this material, so seamlessly presented alongside the other sources, complicate our understanding of the preceding videos, underlining the sinister potential of even the most seemingly absurd ‘relationship advice’.

Remaining meditative and transcendental in texture and rhythm, The Art of Luv begins to curdle and grow gradually discomfiting. As the piece ends and the two “priests” in their robes and gold facepaint solemnly shuffle offstage, the audience is left with uncomfortable questions as to their own complicity, both in the performance itself and in the larger cultural dynamics that it purports to illustrate.

Like Loading...
Tags: The Art of Luv (Part 1), The Royal Osiris Karaoke Ensemble, Under the Radar Festival

In Performance: Thunderstorm 2.0 (Under the Radar)

In Performance: Motus, Panorama (Under the Radar)