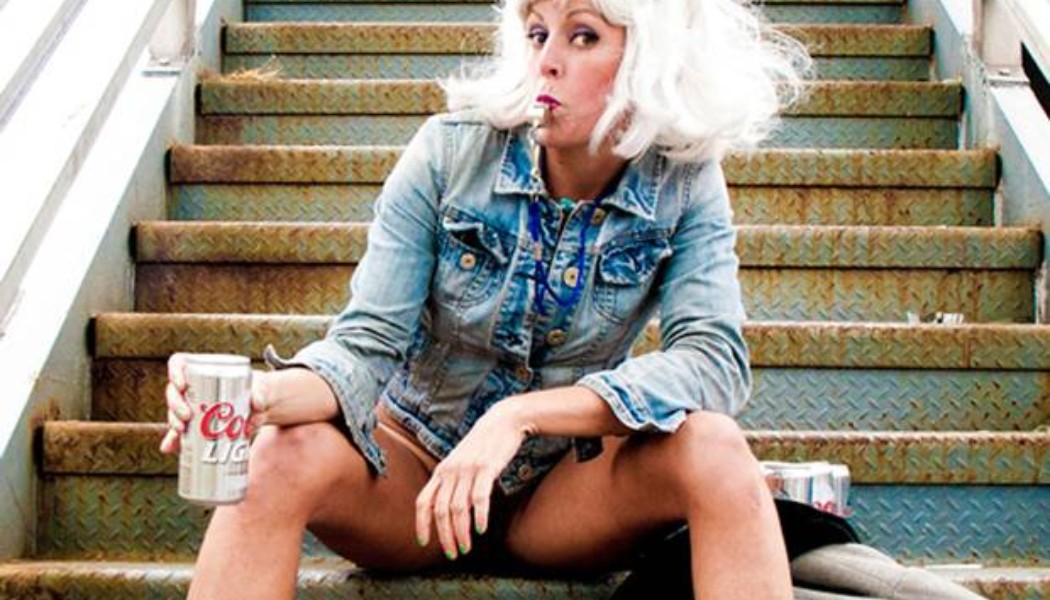 Adrienne Truscott’s show has a provocative conceit – she’s doing stand up comedy and she’s naked from the waist down. She riffs on the fact that she’s ‘asking for it’, wondering excitedly what might happen by the end of the night. The show is uncomfortable, and dark but extremely funny.
It’s a feminist act, re-claiming the power of those victim-blaming and slut-shaming rape myths (‘look at how she was dressed’, ‘she was drunk’), turning them on their head, and exposing them for the joke they really are.
A mostly bare stage, with framed photos of all the male comedians who have made rape jokes (Bill Cosby gets a special platform, and a glass of whiskey), Truscott dances, sings, makes jokes and draws on her circus background with clever video projected on her stomach, and an ending that I won’t reveal, except to say that it had me in stitches.
Truscott’s targets are the male stand up comedians who find soft targets in rape victims and womenkind in general, perpetrating the belief that rape is something that can happen to you if you step out of line. Truscott ‘steps out of line’ again, again and again and we love her for it.

Eleanor Bishop
Eleanor Bishop makes socially engaged performance experiences that seek to untangle complex systems of oppression through active participation by audiences. Her pieces often blend found text, documentary interviews and live camera, and play with the performative structures we know as 'theater', 'seminar', or 'debate'. She embraces that her work sits neither easily in performance, art, or activism and she often partners with organisations and institutions to create deep, long term collaborations for her projects. She has worked as an assistant director for The Builders Association, Big Art Group and as a directing intern at The Wooster Group. Originally from Aotearoa-New Zealand, she received her BA in Theater (Honors) at Victoria University of Wellington and recently completed her MFA in Directing at Carnegie Mellon University's School of Drama in Pittsburgh, PA, USA where she studied as a John Wells Fellow and a Fulbright Scholar. Prior to coming to the United States, she worked in New Zealand as a freelance director, and co-director of acclaimed New Zealand theater company The PlayGround Collective, whose work across site-specific, new writing and participatory forms toured to arts festivals and venues nationally.