In Performance: Alessandro Sciarroni’s FOLK-S, will you still love me tomorrow? at New York Live Arts/Crossing the Line 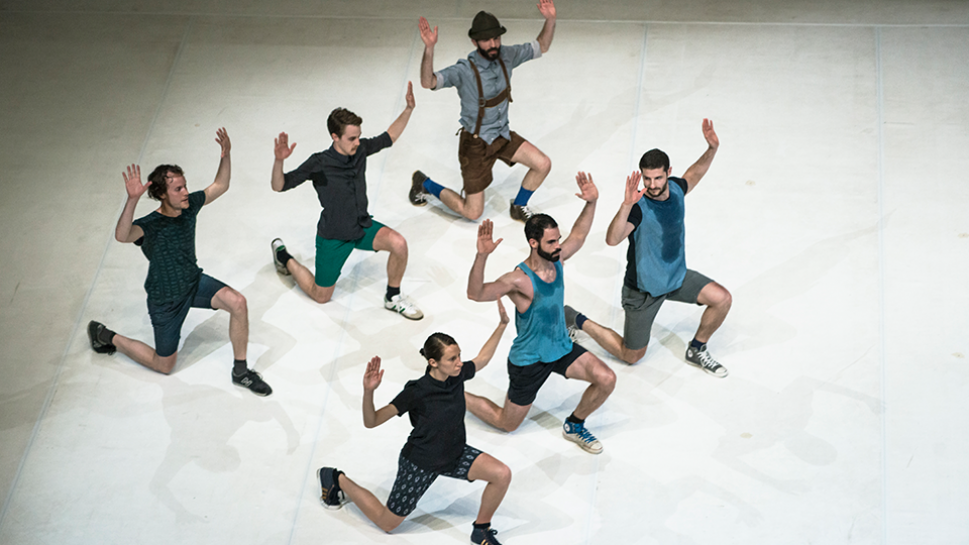 Performing through Saturday, October 3rd at New York Live Arts (co-presented by the Crossing the Line festival) Alessandro Sciarroni’s FOLK-S, or will you love me tomorrow? is spellbinding, exhaustive, and ultimately invigorating. Proceeding from simple terms—a straightforward if aerobic folk dance from Sciarroni’s native Italy along with a pronouncement towards the beginning of the piece that the performers will continue to dance the phrases until they cannot. Once an audience member leaves the space, they cannot return; same goes for the performers. Rather than a rinse-and-repeat durational experience a la Ragnar Kjartansson, FOLK-S unfolds as something much closer to Sarah Michelson’s Devotion performances. Formations ripple across the stage with grace and humor in a masterful manipulation of the space. Around minute forty (probably; I checked my watch once during the performance around the two-hour mark mostly to assure myself that time still existed) the whole room seemed to shimmer and dilate, and then things began to get really interesting.

As the tremendous performers (the first comparisons that spring to mind are Sarah Michelson’s collaborators and, unlikely as it may seem, the five adolescent performers in 600 Highwaymen’s recent Employee of the Year) rolled on, meaning began to flicker into and out of focus. Sometimes the gestures of the phrase seemed to stand out in relief, sometimes they would evidently disappear altogether and the traversal of the space became the focus. Meditations on endurance, heroism, and sacrifice came to mind. Within the sparse landscape of signifiers Sciarroni’s costume—a traditional outfit of lederhosen and a woolen cap—seemed to suggest the well of vitality within folk traditions, bringing to mind Grotowski’s physical training exercises mining traditional forms for their ability to tap into a seemingly inexhaustible source of energy.

FOLK-S is not without its faults; the sound design was perhaps overly opaque, seemingly more meaningful to the performers than to the audience at times. Occasionally the sound seemed a little short on ideas, repeating its handful of devices to diminishing effect. This is a minor point, but it stands out in a production which in all other aspects utilizes repetition to transform first content, then performers, then audience. There were moments when I laughed out loud, when I was moved almost to tears, when I was bored, when I was delighted, when my mouth hung open and I sat on the edge of my seat in high tension. Through a synthesis of athletic bravado and elegant formalism, FOLK-S creates a space for contemplation and empathy. By its breathtaking conclusion, I was caught between wanting the performance to continue ad infinitum and wanting these performers with whom I had come to feel so close to cease, to rest, to finish their sacrifice on my behalf.

Video and Images by Matteo Maffesanti