In Performance: Meg Stuart/Damaged Goods, Until Our Hearts Stop 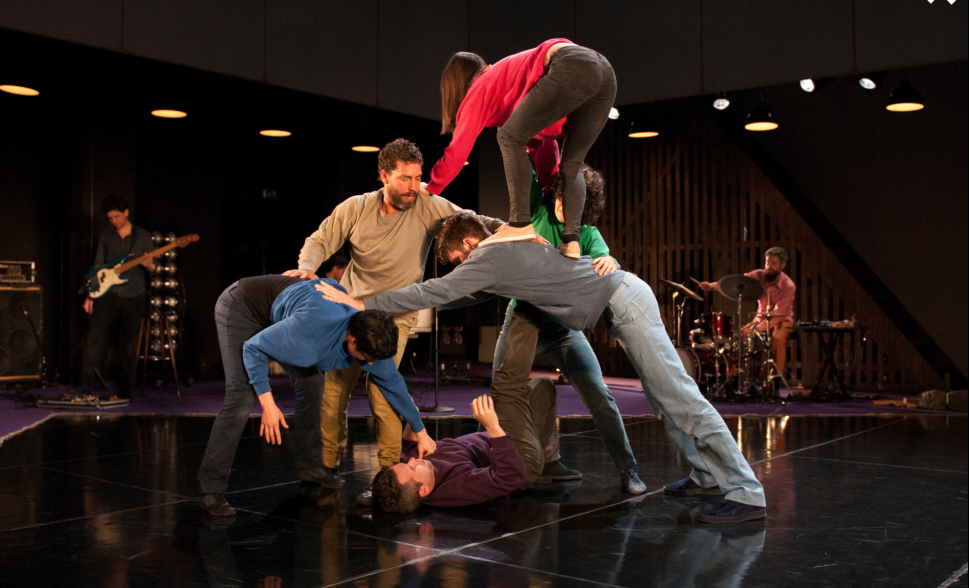 When a disgruntled spectator walked out of the theater forty-five minutes into Saturday night’s performance, he took the time before exiting to announce to the room “how embarrassing and disgusting” the work was. The two performers onstage instantly stopped their activity (a playful, inquisitive exploration of each other’s nude bodies) and sprang into defensive crouches, darting glances towards the voice at the back of the house, like startled animals ready to fight. Waves of warm laughter swept through the audience, not only in appreciation of the performers’ quick response, but because their reaction, slyly exaggerated as it was, was shared by many of us. Until that moment, embarrassment and disgust had been refreshingly absent from the space. To conjure these states by speaking the words aloud was not just an ill-timed critique; it felt like an affront, an attempted reimposition of conditions and contexts the performance had worked carefully (and joyfully) to transcend. In a program note, choreographer Meg Stuart discusses the idea of borders, both physical and social. “Our social relationships are built on protocol, fear even,” she writes. “We have a lot of limitations.” Evidently so.

In UNTIL OUR HEARTS STOP, Stuart, an American whose work is rarely seen in the U.S., pushes her performers past those limitations. An opening sequence drawing on Stuart’s experience with contact improvisation quickly progresses into even more intimate territory—well beyond the everyday boundaries that keep us at a safe social distance—as the performers map the contours and crevices of one another’s bodies with hands, fingers, mouths, and noses. These explorations are often tinged with the erotic, but explicitly sexual gratification is not on offer; the intention and context are absent. The performers simply accept pleasure when it arrives as a natural consequence of any of their varied modes of touch, as they also accept pain, awkwardness, and discomfort—all of which are entirely different from embarrassment. Doris Dziersk’s purple-carpeted set, part swanky cabaret and part rec room, creates a space that is almost but not quite familiar, a territory with no known rules that allows anything to unfold within its bounds.

Though Skirball’s proscenium initially separates us, this territory expands to include the spectators, as the performers draw us into their restless interpersonal experimentation. In lieu of an intermission, the performers make their way into the house, asking questions (“Does anyone have rage?”), offering up objects for tactile encounters (I ended up with a lump of clay, clay which shortly prior had encased the head of the performer who handed it out), and calling out several special guests in the audience. Later, our nostrils are filled with the smoke and sweet scent of incense, and a volunteer is brought up onstage to participate in a classic disappearing act, complete with mirrored compartment. These and other references to magic and mysticism again approach the question of boundaries: between reality and illusion, inside and outside, between what we thought possible and what we see happening in front of us.

Near the end of the two-and-a-half-hour piece, the house lights go up and the company faces the audience as performer Claire Vivianne Sobottke presents us with a series of proposals. Is there anyone in the house, she asks, who has the time to walk her to her hotel after the performance? Come up to her room and eat chips? Is there anyone who wants to take the company out clubbing til morning? As she elaborates various scenarios, listing all the things “we” would do together, alternative outcomes begin to take shape in our imaginations, directions the evening could take that we hadn’t conceived of. No one volunteers, however, and Sobottke’s proposals grow ever more manic, as a driving rhythm (courtesy of a trio of onstage musicians who occasionally double as dancers) gradually fills the space. “Can somebody put a spell on us so we don’t feel anything anymore?” she finally calls out. In this cry I hear not a craving for emotional anesthesia, but a wild desire to exist beyond, to inhabit a state outside of our ordinary modes of living and feeling. In staging this desire, Stuart enlists her collaborators and her audience in casting her own spell. A spell for the banishment of embarrassment and disgust; a spell for new forms of relation, calling forth possibilities for connection, support, and release.