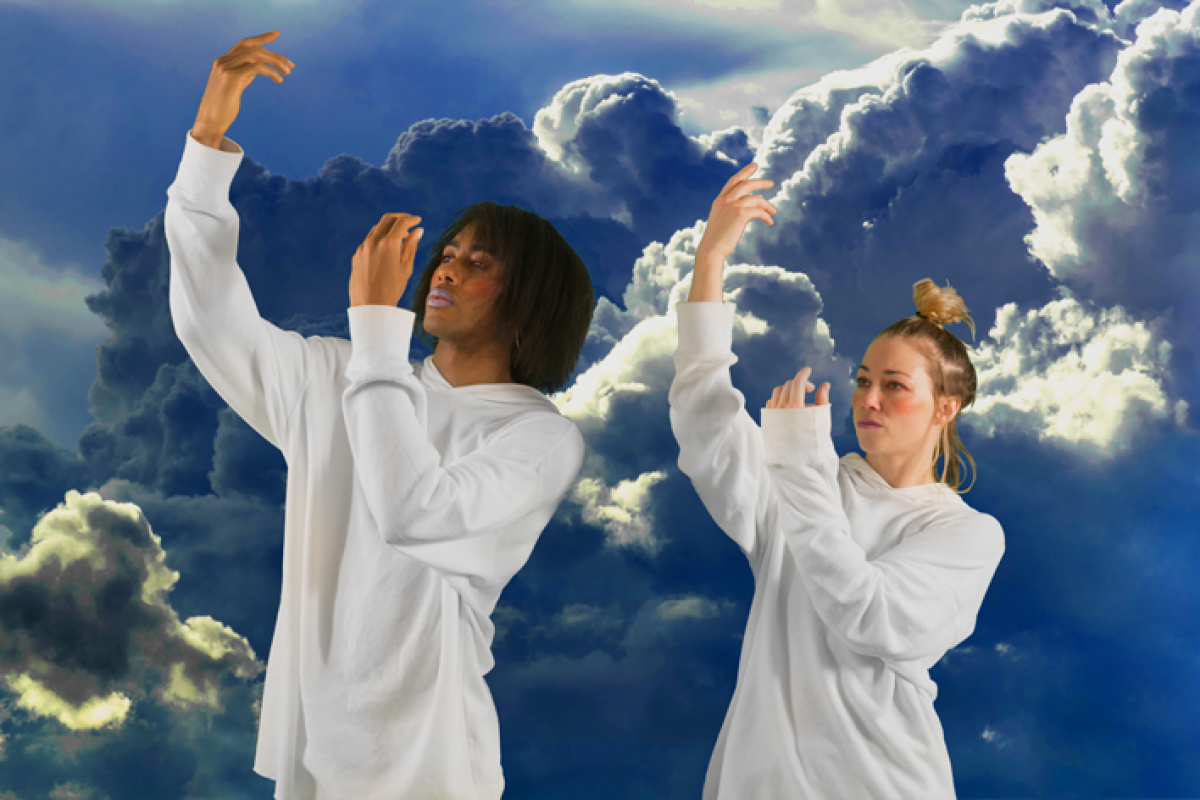 As the dancers Ellen Furey (based in Montreal) and Malik Nashad Sharpe (a New Yorker based in the UK) began yet another iteration of a looped unison sequence—which had already been and would continue to be repeated beyond anything close to an expected duration—I found myself thinking about smoke. Upon entering the performance space, we had been met with the sweet scent of incense, emanating in small white tendrils from the burning sticks held by Furey and Sharpe, who lay motionless on the floor clad in white athletic gear. The dancers’ extreme stillness made the meandering billows and emanations, subtle as they were, a natural focal point for the eye; at the time, the smoke’s gentle curls had soothed and enticed me. Now, watching the dancers’ precise exertions, I retroactively reconsidered my perception of the smoke’s quality of movement. Rather than a free and indeterminate flow, I imagined I saw its kinetic effortfulness, the energetic work of vapor and particles executing a meticulous molecular choreography. And in a kind of counter-response, the highly structured (and evidently exhausting) container that housed the performers’ movements seemed to open up, their bodies claiming a freedom—an autonomy—through the choice to continue the sequence. A choice they make again and again.

Furey and Sharpe unfurl their claim to our time and attention with deliberation, their bodies living inside of stillness and movement patterns alike long enough to push beyond our initial impressions of meaning. This performance is not, to put it mildly, in a rush. Its methodical slowness invites—or perhaps hypnotizes, intoxicates, or benumbs, depending on one’s individual response—the spectator into something approaching a trance state. We are enveloped, our senses saturated: by the pervasive scent of the incense, by Paul Chambers’ mesmeric blue lighting, by an endlessly looping audio track of melancholy electronica (“vaporwave,” according to Furey’s website, echoing the wafting smoke). The performance creates a powerful and cohesive affective field that nonetheless permits a wide variety of responses to coexist: delight, stupor, impatience, awe, reverie, and, for me, a moment of pure adrenalized thrill.

As they continued their virtuosic repetition, the two dancers began vocalizing wordlessly. Their vocalizations grew in support and power, eventually becoming full-throated cries. I felt a chemical rush of solidarity with these bodies, molecules inside me rising up to meet theirs as they carved out and claimed a space in which to move, to flow, to be. Abruptly the vocalization ceased, the sequence continued, and then, without breaking their shared stride, the performers as one chose to exit.

In Performance: Jack Ferver, Everything is Imaginable (American Realness)