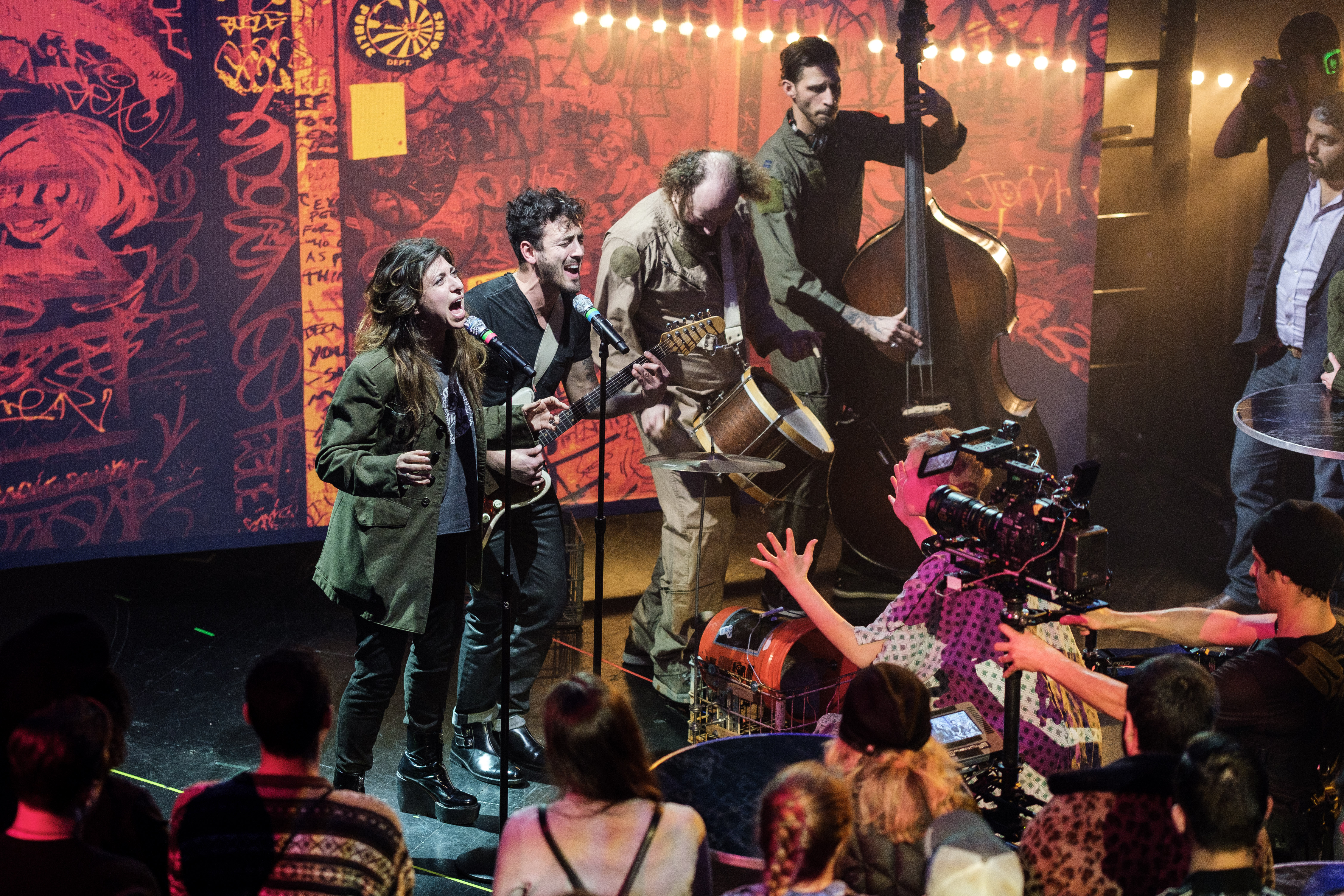 In The Infinite Hotel, written and directed by Michael Joseph McQuilken, the audience is divided upon entrance: between “background actors” who experience and participate in the event on Irondale’s main floor and “producers” who watch the event from a balcony above. And quite an event unfolds, as The Infinite Hotel is not only a performance to be viewed but also a film to create. Pre-show is as alive as any film set (albeit a one-camera one), with a steadicam operator and monitors around the space along with lights and cables and marks and a large crew. A First AD figure helps explain what is going to happen: the producers will watch from above, listening in on provided headphones; the background actors will sometimes watch and listen through headphones, but at other times will be directed to clap or cheer or roar or get up out of their seats to form a crowd at a bar or a crowd at a concert or–the first task–a crowd at a subway stop.

When the show/film begins and the audience becomes that subway platform crowd, the magic in The Infinite Hotel’s conceit reveals itself. From the balcony, it’s possible to watch four performers play a scene around an audience–a necessarily messy affair that the actors navigate beautifully. But it’s also possible to watch the curated scene on the monitors, through the extremely impressive steadicam operator Kevin Jacobsen’s eyes. The camera focuses in on elements of the scene, moving from shooting the performers through the bodies of the extras, to zooming in on their musical instruments, to lingering on one as he starts to fall in love with another. There’s even a delightful opening credits sequence the camera makes of the posters on the subway set walls and the notes on the subway set floor. Throughout its two hours, The Infinite Hotel repeatedly puts the floor audience to good use and allows the balcony audience a dynamic choice of watching the performers with its own eyes and watching them on the monitors through the camera’s.

The Infinite Hotel also makes good use of its lead performer, Leah Siegel. Music connects the many storylines of The Infinite Hotel, and the music shines brightest when played and sung by Siegel: her talents infuse the event with another magic. Luckily all who attend are promised to receive, by email, a cut of the live film, so that revisiting such magic will be possible, infinitely.