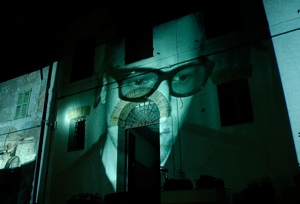 in june, 2009 daniel aschwanden, yanfeng pei and peter stamer used their video cameras to accompany a chinese banknote on its way through china, thus also getting to know the people who spent it. with every completed transaction the three travellers changed their owner together with the bill. aschwanden and stamer record their encounters and delved into the lives of more than 30 people: what kind of a people is it that spends the “renminbi”*, the “money of the people”?

in june, 2010 the three continue their project in salzburg. they feed a marked 10 euro bill into the money flow of salzburg and follow it on its way to places and people. just like the two european performers were able to get their own view of china with the help of yanfeng pei’s translating skills, aschwanden and stamer now assist the chinese artist on his expedition – as interpreters and documentary filmers. the impressions recorded and images taken in china and austria will be presented scenically and as an installation from july 9 in the kavernen which were designed by the visual artist paul horn. the artists will be present.

from june 21, the journey of the banknote can also be followed on twitter under “thepathofmoney”.

in her video installation “ethnography of a european city” the artist and documentary filmmaker iffat fatima, a native of cashmere in india, hits the streets of salzburg, accompanying an african asylum seeker, austrian street sweepers, tourists, artists and polyglot citizens of salzburg. as a non-european, fatima focusses on salzburg as a destination for those who are searching for the epitome of a traditional european city. this outsider’s perspective creates a fruitful discrepancy between the observer and the observed.

in salzburg, the art form dance is leading a rich life: practical and theoretical training, dance festivals, a variegated dance scene. this year’s sommerszene has placed a unique dance event for salzburg into the city. 50 young dancers from all over the world who live in salzburg and are trained at sead play on kapitelplatz, one of the city’s pittoresque architectural peculiarities.
the choreographer of the spectacle, diego gil comes from argentina, where dancing is an important part of the attitude towards life. he has developed movement patterns whose multiplicity and dynamics not only accentuate each dancer’s individuality, but also create an impressive overall picture. gil has worked with the young dance artists on outdoor over half a year, and developed a concept to become the exceptional dimension of a choreography for 50 dancers. the dance artists are accompanied by the lebanese composer and music performer tarek atoui, whose electronic sound cascades are activated by his movements: a highly theatrical process of unforgettable originality.
the aestival dance spectacle in front of the scenery created by fortress and dome is a statement on behalf of contemporary dance in salzburg.

what do the salzburgers think about salzburg? how do social communication, neighbourhood, a democratical process work in this city? questions concerning our daily reality are put into focus by a dense and diverting visual-theatrical event next to the façade of the salzburg residence.

the form of the spectacle is uncommon, a kind of living television, a comprehensive large-scale display of our city, a projected televisual work of art in public space. the piece employs means like video clip, live action, live music and live broadcast from the salzburg residence, interviews, pictures of the city, re-enactment of public situations as well as contributions by the population of salzburg. the performance draws its power from the unique combination of film, theatre, music and action with the location. die salzburger is inspired by greek tragedy, aeschylus’ oresteia, which thematises questions regarding government, the development of legal relationships, democracy and social dialogue. because of the central participation of 40 salzburgers of various social backgrounds, the performance grants a unique view of salzburg.

this exceptional and irretrievable event was created by the visual and dramatic artists of the big art group from new york, who scrutinise the relationship between the individual and its society with the help of refined arrangement and technology. the music comes from the outstanding pop singer and dancer farrad from new york.

die salzburger is part of the big art group’s large-scale project the people,
and can also be seen as an installation named chapter 1 in the exhibition identity scan salzburg at republic.

following the performance sommerszene, the trumer brewery and the company wiberg invite for an opening party in the residence yard.

a special ambience for a special artist: wim vandekeybus, frontman of contemporary european dance for over 20 years and uncompromising prophet of the power of movement, stages a fast-paced spectacle between dance, theatre, film and music specially for the jedermann stage on domplatz. with dancers from his company ultima vez he creates a flood of images that breaks over the audience with virtuoso acrobatics, passionate lust for movement and exploding visuals.

these tableaux vivants are borne by the powerful live music of mauro pawlowski, one of the wild eccentrics of the belgian cult band deus, with whom vandekeybus has also worked together in his last theatre production nieuvzwart. in salzburg he can be experienced with his own band pawlowskis, and highlight the lively stage performance with captivating funky rock’n’roll sounds.

The full Szene Festival program can be seen at http://www.szene-salzburg.net/index.php?id=205