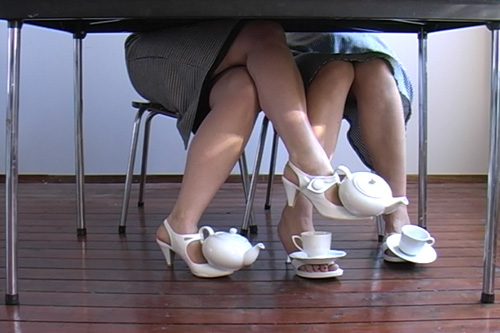 Each week the top ten most active members on the network are voting on. The winner is promoted on the network front page and interviewed on the blog. To see this week’s voting click here–>. Below is this weeks Spotlight Member, Nina Boas (Rotterdam, Netherlands).

1. Can you tell us a little about your work, your history and your performative concerns.
I was born in 1980 Saumur/France. Grew up in Amsterdam. I studied Sculpture at the AKI in Enshede in the Netherlands(1999-2003) I currently live in Rotterdam. After my studies I obtained a stipendia for one year from the BKVB. I have been active as a performance/installation artist for several years and have shown my work in China, Finland, Spain, in different performance events and exhibitions, I have shown work in the Flemish cultural house (Brakkegrond) in Amsterdam as a part of Museum night and I was part of a group show in TENT during 10. TENT Blurrr in Rotterdam. I have worked in collaboration with choreographs, musicians, video artist, dancers and actors for which I obtained a grant this last year as well as working on musical scores which I use in my performances and installations. Next to my practise as a performance artist I organise a yearly performance event called PAE set in Rotterdam, I am a member of Tricksters a performance improvisation group, and the NoNewEnemies Network in Brussels. In 2011 I have been invited to residencies in Berlin (Grimmuseum) Steim Institute in Amsterdam I was working for the Pop arts festival in Amsterdam (an object theatre festival organised by Van Ostade theater, Bellevue theater and the Krakeling) where I did out door interventions while I was projecting doll houses on buildings through out the city as part of the live performance.

My work consist of layers, in the use of the mixed media, drawing, building installations, live constructions, performing, and playing with scale and creating a bond between reality and the imaginary world. These layers, developing from the performance are tools I use to express a story line which investigates, and actively pushes the audience to become a part of the work, raising the question of the ‘Here and Now’.

In many of my installations and performances I start an interaction. I use paper or daily object to interact with the audience on a large screen,which is being projected. I will use this as a settling point for the viewer, this is a visual recognition there for the audience has settled into a passive state. I will arrange simple elements such as a bucket, a string, and a umbrella in the space of the performance. These Object have a common use and are very recognisable to the audience. These simple actions represent not only the idea of action, but of object, and are a simple example of a perpetual evolution of a performance into an art piece.

Another piece which investigates the idea of Here and Now is the Dance Machine, which is a performance/installation which I ask the Audience to be a part of a short Revue. This Revue starts as the audience steps into the venue- they are escorted to a dressing room, where they will be instructed to make 20’s style clothing for 10 minutes, then they will move to the next area to put on make up, and then finally to a stage where the

In my work the boundaries between the fine art and the theatre seem very blurry, I see this as an interesting point to further investigate these boundaries. I come from a fine art background but play with the theatrical elements, Making what I do a desirable element in the fine art world. My work is a total opposite of the now seemingly hyped conceptual art, I dare to play with entertainment elements in a time where an empty space seems to be the coolest thing.

2. What are you working on now?
I am working now on two upcoming exhibitions, one in The Netherlands (http://www.bewaerschole.com/#/programma/) and one in Sweden (http://www.verkligheten.net/). For each I create a new performance installation and have to think about a setup that will stay after I am gone and the exhibition is still on. How do I deal with the documentation of a performance? How to place it in the leftover of a performance.

3. What are your biggest performative obstacles for yourself in this new work?
Performative obstacles are due to time, it’s to short and i need more of it. Time to try things out and time to work on a piece, take a step back and look at it in an objective way, more time to think it over and to experiment .

4. What was the last piece that you saw that you would recommend to the Network and why?
YVOD/ROBOT from Tuning People (BE), I saw them during the Pop Arts festival in Amsterdam, a very cool piece where a mixture of experimental electronic soundscapes and object theatre come together. Sweat ,poetic and with humour. I wish them good luck on there new piece!