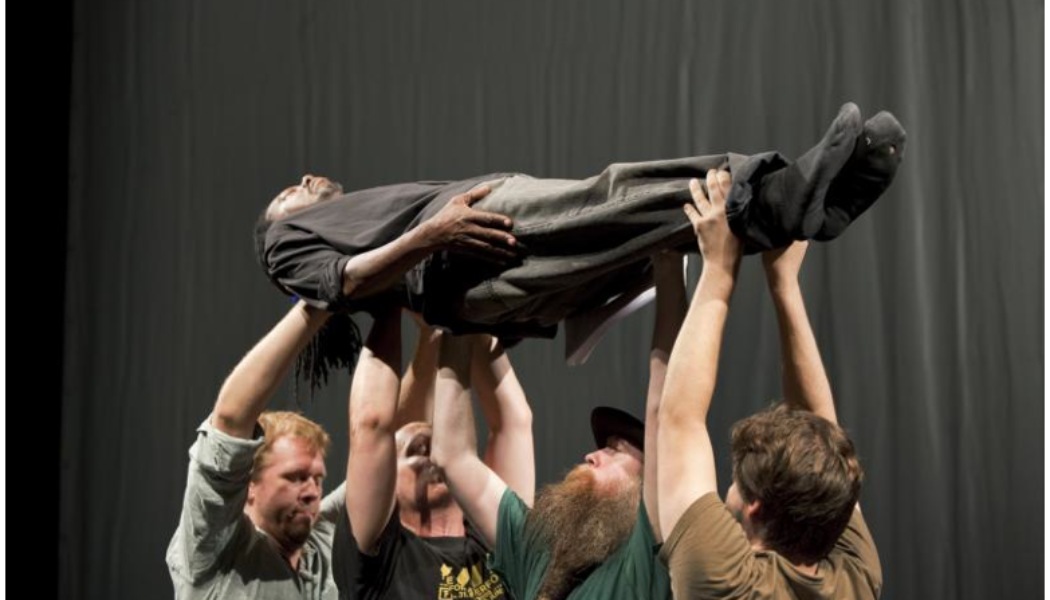 An international event celebrating new works in contemporary dance and theatre, the Festival TransAmériques combines disciplines and artistic trends under cohesive programming. The Festival presents exciting forms of the art of our era, featuring works by choreographers, writers and directors. The only criterion is to present strong work, regardless of theme or place of origin.

A vehicle for dialogue between cultures and generations, the Festival TransAmériques showcases major artists as well as artists whose emerging voices rise above the fray, influential and audacious. It supports these exemplary artistic approaches through co-productions.

The Festival is a place to meet, a major get-together. It encourages exchange between artists and audience. Workshops, debates and round table discussions that echo and expand on the performances give rise to discussion and questioning.

Multilingual, hybrid, festive, the Festival TransAmériques reflects the rhythm and image of its home base – Montreal. In an age where impurity, cultural and artistic mixing and the free flow of ideas are characteristic of the performing arts, the Festival TransAmériques invites and accompanies artists and spectators to explore these intriguing mutations and myriad encounters.

Below are Contemporary Performance’s highlights.

Crisis of Confidence
Theatre and dance are a seamless whole, and that symbiotic union is at the heart of this brilliant, disturbing and ripped-from-the-headlines piece. TrusT, a caustic and delightful look at the financial crisis, asks an essential, pressing question. In an era when couples form and break up at the same speed that stocks rise and fall, can we still believe in anyone or anything?

In the midst of this ideological chaos, the individual – isolated and distraught – doesn’t know where to turn. It is that numbing feeling of helplessness, that disastrous inability to shake out of the torpor and act that is portrayed by the scathing German writer Falk Richter and the eloquent Dutch choreographer Anouk van Dijk, he by means of pointed monologues and caustic dialogue, and she by entangled bodies constantly off balance but trying to support each other until inevitably one slips and falls. A striking and superb show by Berlin’s celebrated Schaubühne.

Balancing on the Edge
Renowned for helping dancers think of the dancing body by means of her Countertechnique movement system, where a movement is systematically twinned with its opposite, the brilliant Dutch choreographer Anouk van Dijk was the recipient of the Lucas Hovering Award at the Dutch Dance Days festival in 2000. Her œuvre includes several outstanding pieces such as Stau,Nothing Hurts (which was awarded the German Academy of Arts Prize) and PROTECT ME, the latter two created in collaboration with Falk Richter.

Pushing Boundaries of German Theatre
The audacious and talented Hamburg writer and director Falk Richter is constantly pushing the boundaries of theatre. His scathing, anti-establishment plays, including Das System, Dieu est un DJ, Peace and My Secret Garden are as gripping as the staging, with the pieces directed by Richter himself. He has directed some thirty plays, his own as well as works by Jon Fosse, Sarah Kane and Lars Noren.

SCHAUBÜHNE AM LEHNINER PLATZ
Leading Light of Contemporary Theatre
Since its inception in 1962, the Schaubühne am Lehniner Platz has pursued a social and political mandate by mounting daring, intelligent works. The theatre, whose international reputation continues to grow, presents both iconoclastic contemporary pieces and classical plays by authors such as Chekhov, Shakespeare and Ibsen, works that cast an enlightened gaze on society and the human soul. Many innovative playwrights have been in artistic residency at the Schaubühne, writers such as Marius Von Mayenburg and Franz Xaver Kroetz. In 1999 the Schaubühne (whose current artistic director is Thomas Ostermeier) began including dance in its programming.

Water Bomb
Pororoca means tidal bore, the powerful ebb and flow of the dramatic encounter that occurs when the roaring waters of the Amazon charge into the ocean currents of the Atlantic. For Lia Rodrigues it is a metaphor for the collision of differences. She creates an unceasing swell onstage, a spirited, multicoloured wave of 11 dancers, a fluid mass of compact energy that swells, rolls, crashes and re-forms in a new embrace of the body, rising and breaking before returning to a brief lull, hovering on the tipping point that will transform chaos into harmony. The movement is vigorous, the breathing raucous as the characters strive for position amidst bodies scraping together. To be, to be together – an eternal challenge.

After spattering the Festival stage with ketchup blood in incarnat (2007), the Brazilian choreographer will be dousing it with raw beauty fed by rage, hope and animality and all in total silence, an exceptionally eloquent silence.

Lia Rodrigues, Artist and Activist
Without the festival that Lia Rodrigues founded and has been directing for the past 13 years, Brazilian contemporary dance would not be what it is today, and the sprawling favela in the heart of Rio would not be the same had she not created a dance company and a performance centre there. An activist through and through, Lia Rodrigues studied dance in Brazil before working for Maguy Marin in France, where she choreographedHymnen for the Ballet de Lorraine. She has created some fifteen works in collaboration with her dancers, and was the recipient of the Sao Paulo art critics’ award for Pororoca and in honour of her 20 years as a choreographer.

Lia Rodrigues Companhia de Danças, Art and Society
Founded in a favela in 1990, the company has a twofold mission – to stimulate reflection and discussion through dance pieces, and to fight against poverty and marginalization by means of social action and outreach projects, one of which led recently to the training and hiring of three new dancers. Inspired by contemporary reality, her pieces serve both as a release and as a call for change. Combining performance art and dance, Ce dont nous sommes faits emphasized the universal need for peace and tenderness. Incarnat dealt with the feelings aroused by the suffering of others, and Pororoca invites us to accept those who are different.

Immortal Heroes
In a small town in the middle of the United States, life is constricted by the ancient founding myths of humanity, ever repeated. On an empty stage as vast as the big sky of the Midwest, apparently ordinary people play out episodes of their daily lives. They do not speak, but they sing with the disarming sincerity of the guileless. Then something mysterious slowly unfolds, for under the surface of daily life lies the violence of American history and the still festering wounds of the great heroes of antiquity – Gilgamesh, Ulysses, Aeneas – whose terrible struggles we unconsciously repeat. Ten years after the success of House, Richard Maxwell and the New York City Players are back at the FTA with their fascinating theatre without artifice to let us know that destiny still exists, that man belongs to time as the gods to eternity.

The playwright and director Richard Maxwell, one of the most remarkable artists in the contemporary theatre, undermines from within the conventions of American theatrical realism in order to create a theatre of the real. Born in 1967 in Fargo, North Dakota he studied acting at Illinois State University before joining the renowned Steppenwolf Theatre in Chicago, where he was a co-founder of the Cook County Theater Department. Once he began working with the New York City Players in 1997, he transformed the company into one of the rare theatres in the United States to rethink the very foundations of the actor’s work.

THE NEW YORK CITY PLAYERS
The New York City Players – a company that includes both untrained and professional actors – has staged since 1997 some twenty works by Richard Maxwell, including Burger King (1997), House(1998, presented at the FTA in 2001), Cowboys and Indians (1999), Drummer Wanted (2002), Good Samaritans (2004), The End of Reality (2006) and People Without History (2009). While favouring the narrative form, the company bases its work on the concrete reality of the actor onstage – an unpredictable and ever-changing reality – in an approach that puts into perspective yet also magnifies the fictitious universe played out onstage.

To view the full program visit the Festival TransAmériques Website