By Caden Manson (Editor In Chief)on May 23, 2011
Comments Closed 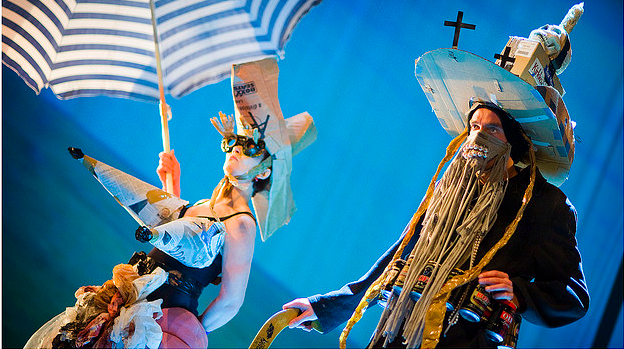 Smeds Ensemble works on a widening field of arts. Aside from theatre, the group also produces films, clubs, radio plays, music, workshops, performances and media art. The first international theatre group from Finland is most open-minded in seeking new forms and practices on the stage.

In its projects, Smeds Ensemble takes advantage of the wide contact networks of its members and aims at long and continuous collaboration with various artists and institutions. Performers and artists are hired on project-by-project basis. Smeds Ensemble does not have a permanent residence (although nowadays a small office space in Helsinki). Venues for performances are provided by the co-operation partners, such as international festivals.

Smeds Ensemble has three permanent members: Artistic Director Kristian Smeds, Executive Director Ville MJ Hyvönen and Head of Production and PR Eeva Bergroth. The compactness of the core team and the way of working without their own theatre stage or premises, allowes that most of the resources are invested direcly in the artistic work. Light structure guarantees the group a greater freedom, flexibility and mobility.

The closest partner of Smeds Ensemble is the Von Krahl Theater based in Tallinn, Estonia, where Smeds and Hyvönen have been working before Smeds Ensemble was founded. Close cooperation partners, among many many others, are also The Finnish National Theatre, The Helsinki Festival, Baltic Circle Festival and the Estonian theatre Biennale Baltoscandal. (from Smed’s Ensemble website)

Kristian Smeds
One of the leading theatre personalities in Finland, Smeds has directed and written several stage plays. He graduated from the Finnish Theatre Academy in 1995. In 1996 he founded the famous Theatre Takomo, working as the Artistic Director during 1996-2001. In 2001-2004 he was the head of the historical Kajaani city theatre, which even gained international recognition during the time. The years 2005-06 he was working mainly in Baltic countries, before founding his own company in 2007.

Ville Hyvönen
Producer in Seinäjoki city theatre in 2001-2003, Project Officer and Producer in Ministry of Interns culture project “Generaattori” in Kajaani 2003-2004 and chairman of the board in production company Provisual Ltd. 2003-2007. He is also the Executive Director of PixelACHE, an international festival of electronic art and subcultures, held annually in the museum of modern art Kiasma in Helsinki and in Paris.

Eeva Bergroth
Worked and studied in the field of culture and arts for the last ten years in Finland, Germany, France and Belgium. Before the Smeds Ensemble was founded, she worked as a Press Officer of The Helsinki Festival and Musica Nova Helsinki Festival. Besides the Ensemble active in the Finnish cultural field, amont other things as a freelance translator.