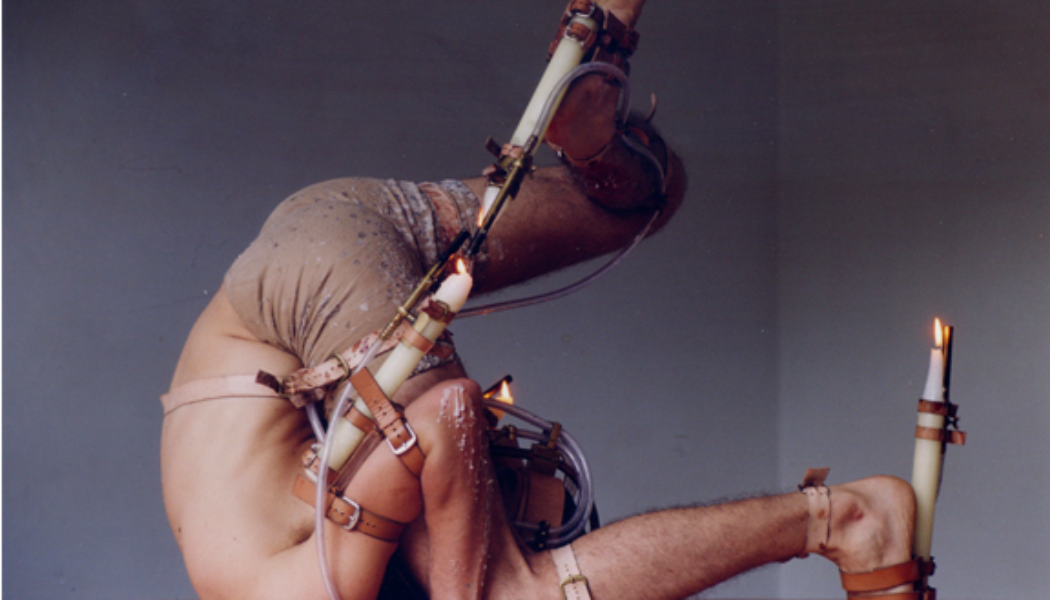 The Brazilian action artist Michel Groisman stages his own body in sculptural motion-pictures designed for art galleries and museums. With the machines he constructs, he relates the movements of parts of his body one to another in extremely slow sequences of movements. In other projects, Groisman integrates visitors via games into mutual actions with their own arms, legs and feet.
Groisman integrates visual art and physical games, devising wearable equipment to be used in various performances and interactive public encounters. He attended Uni-Rio Music College and has received art research scholarships from several Brazilian institutions, including Rioarte (2004), Vitae (2002), and Uniarte da Faperj (2000). His work has been shown in both performance festivals and museum settings, such as the Museum of Modern Art, New York; II Bienal, Lima, Peru; Festival de La Batiê, Geneva; and the In Transit Festival, Berlin. Since 2004, he has partnered with artist Gabriela Duvivier to develop collaborative projects.
Michel Groisman´s aim is to transcend the narrow limits of art languages. In his subtle performances the Brazilian action artist relates his own body to the public, making viewers willing participants. (Source culturebase.net and pica)

Creatures / Criaturas (1998) Each performer has his/her equipment connected to an electrical current pole. When the two of them meet and touch, they close the electric circuit, turning on the light bulbs.
Transference / Transferência (1999) In a continuous movement Michel Groisman passes on the light from one candle to another and, blowing through a system of tubes, he can choose the candle he wishes to put off.
Tear Weaveair (2000-2001) is a performance in which Groisman lets a laser-beam, coming from his mouth, wander slowly along his body with the help of small mirrors, breath-protection masks and devices which he calls shoe-adds. Participants, too, are invited to work with these shoe-adds, according to Groisman´s adage: ´While I am weave-airing, you are feet-pairing!´

“The laser beam that comes out of my mouth is reflected in the mirrors on my body, producing geometric forms. The intensity of the ambient lighting slowly oscillates between clarity and darkness. In the apex of clarity the public sees only my body and in darkness, only the geometric forms.”