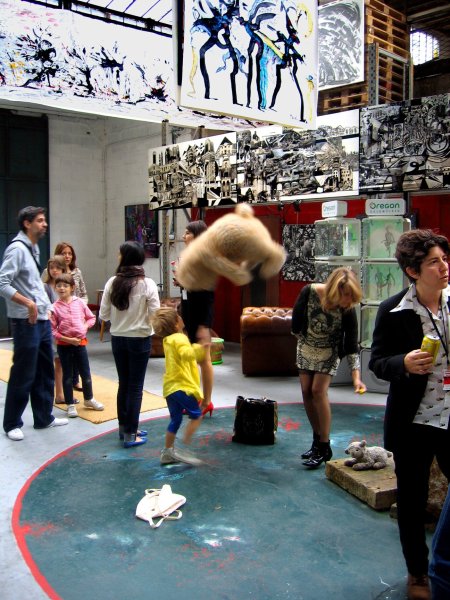 Can you tell us a little about your group’s mission, your history and your performative concerns.
Working with a collective of artists on an experimental performance, I realized how difficult it was to get a venue to perform in Paris, France. I decided to start Dimanche Rouge to provide a space for experimental performers to perform, network, get feedback and eventually collaborate. At the same time, our goal has been to attract the general public to discover experimental performances. Dimanche Rouge is proving that this sort of space was highly needed. We went from two performances in February 2011 to over forty artists from fifteen different countries in September 2011.

We look for experimental work that takes a maximum of risk and seeks new ways to communicate! We care little about the discipline or the format artists work with. Initially we tended to reject work only on the basis of it not being experimental, but the selection process is becoming harder as the volume of applications we receive increases.

What projects are you working on now?
One of our main aims is to create collaborative spaces. On September 17, Dimanche Rouge will be launching a new project called Saturday Streaming Labs. In Paris, we will hold our event at the Sorbonne University. Other institutions and artist studios participating in our project are located in NYC, Los Angeles, Beijing, Melbourne, Brisbane, Rome, Santiago de Chile, and Rio de Janeiro.

Saturday Streaming Labs will provide a real as well as virtual space to debate, present, perform, teach, and create multi-site collaborative performances using internet video streaming technologies. An artist in Paris may dance to the music a musician from Brooklyn plays; a scholar in Santiago may co-host a debate with an art critic in Melbourne engaging participants from different locations in a virtual conversation via streaming.
The Saturday Streaming Labs sessions will focus on experimental performances. Artists, curators, scholars, critics, students, and the general public are invited to participate as a real or virtual audience as well as to propose activities to be shared with the world.
The Saturday Streaming Labs were inspired by the success of our special seventh edition of Dimanche Rouge that took place simultaneously in several international cities with streamed performances from Paris, Kiev, Zaporizhya, Sofia, Berlin, Brooklyn, Utah, Santiago de Chile, Wenzhou in China, and Brisbane and Castelmaine in Australia. For instance, in Zaporizhya, Ukraine, we had over 300 people participating in our performance. The people of Zaporizhya took our event into their own hands. They decided to hold it in Zaporizhya’s main square and to frame our program with a variety of local performers including the very traditional Cossacks dancers. We said, “mission accomplie!” We had generated a space that people occupied and appropriated.
Another recent project Dimanche Rouge has launched is our interview series. We interview our artists to further promote their work. We publish these interviews on our blog and also submit them to other sites for publication. For the moment, we do written interviews outside the event and video interviews during the event. We will have our first DVD compilation of our sixth edition released very soon. We will expand the written interview series to video and audio interviews using Livestream. Dimanche Rouge will have a Kiev edition in Ukraine at the beginning of 2012. We have Chinese and Russian team members who are researching and networking to organize Dimanche Rouge in Russia and China.

Our presentation catalog has 20 pages and it is written in English and French. We will electronically publish our multilingual version in October with Chinese, Russian, and Spanish in addition to French and English. We are also preparing a full catalog of all the performances held at Dimanche Rouge. This will be about 300 pages. Bilingual presentation cataloghttp://tinyurl.com/dimancherougeCatalogV1

Tell us a little bit about your members.
We are currently a team of over twenty including permanent members, interns and volunteers. Our team is notably international–we speak almost twenty different languages all together. We are artists for the most part and are associated to universities either as teachers or students, but there are also lawyers, engineers, medical doctors, and MBAs in our team.

I started Dimanche Rouge with the help and support of Anna Ten and Roxane Gotz. Anna is in charge of Communication and Recruitment. Eva Richter Lorentzen is currently our Production Manager. I can’t mention all members, but most of them are listed on our site http://dimancherouge.wordpress.com/contact/ We do not have any funding for the moment. We have organized Dimanche Rouge with money from our own pockets, helped by very kind people who have lent us spaces and believed in us.

What was the last piece that you saw that you would recommend to the Network and why?
Probably the ensemble of what took place at Dimanche Rouge #6 at this large industrial venue called the Nootek, a very organic building that darkens as the sun sets and seems to breath through its glass roof. This event/performance was about the artists and their performances as well as about the public, the building itself, and also the organizers of the event. We all moved around in an organic but, at the same time, almost scripted choreography.

How have you been using the network. How has it worked for you?
Contemporary Performance Network has been crucial in the development of Dimanche Rouge. We have made some of our most solid and significant contacts through your network, including our collaboration with Red Bind. Your resources listed under Links are simply amazing. They are like WIkipedia for us! Thanks, thanks, thanks!