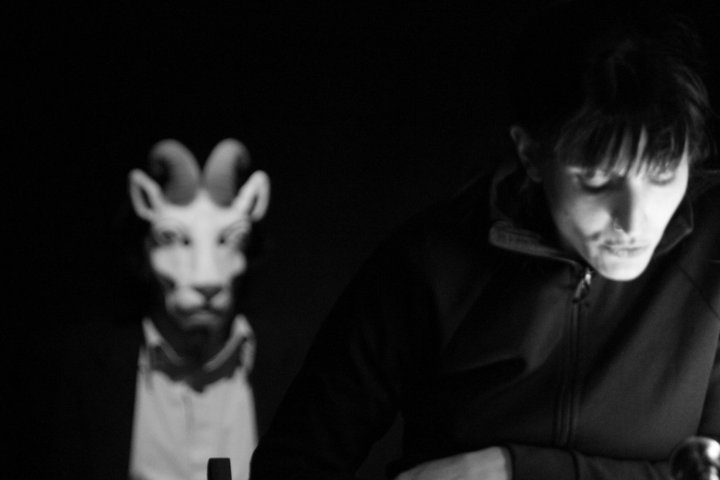 Each week, members of the network vote for one of the top 10 most active CPnetwork artists to be featured on the home page and interviewed for the blog. This week’s vote is half way to the deadline and we would like to introduce you to last weeks leader, Pablo Ramírez (Buenos Aires Argentina).

Pablo Ramírez was born in Buenos Aires, Argentina in 1980. He started acting when he was a child, and has been working for the last 13 years (started at 17 years old). He studied impro, performing arts at the National University and then majored in writing and directing. His work oscillates between performance, theatre, literature and visual art.

1. Can you tell us a little about your history and your performative concerns.
My work focuses on a series of concepts and obsessions that I have since I started working with art: interrogation, crisis, failure, intellectual emancipation, space, utopia, future, social relations and mysteries. I am one of those who still believes that intelligence can improve our lives, relationships and the way we live in the world. Therefore, certain recurring activities in our societies; as stupidity, contradiction, hypocrisy and individualism, have always intrigued me and that is why I want to question them. The problem of production is also interesting to me. In my country, the money allocated to art is almost nonexistent and reality is always putting us to the test. I practically work for free, without any support. Therefore my works, and several of my colleagues´s works, are always an act of resistance.

My way of working is basically associative. I work a lot with references. Sometimes I start working on an author or a particular material or with something that happens around me, that challenges me and I cannot explain. In the early months of each project, I am busy reading and mapping concepts and forms that are slowly shaping the universe. I begin by thinking all the possibilities and then I try to clear the idea. I try to find a synthesis of the main idea. This is the most difficult thing, but it happens though, at least, every two years or so. I´m interested in the question. I’m interested in the spectator who comes to see my show to do some work, who uses his/her imagination and subjectivity to deal with it. I love stories that might differ from viewer to viewer. There is always this tension in my work, between my intentions and reality, between what I wanted and what people end up thinking. The artwork must not have certainties, it has to be an enigma. I think the figure of the Sphinx is pretty close to the artist, or rather I think the artist has much to learn from the Sphinx when thinking about their role in society. No one wants to find the Sphinx, because if you answer wrong, you die. But the Sphinx is also at risk, because if you answer correctly, it should commit suicide. The encounter between the two involves a risk. And like all risks, has a responsibility within. That is why it´s seems necessary. I try to do my work highly context-specific, speak directly to a particular culture in a particular time and space. That is why every commitment to do anything becomes a challenge for me.

2. What projects are you working on now?
I’m currently working on two projects for next year. The first one is the first chapter of a trilogy about the writings of Giorgio Agamben. I’m interested in certain concepts that he proposes in his study of the Homo Sacer. It will be an interrogatory. A text made only of questions about the photographs from Abu Ghraib and the Question of the Other. The second project focuses on the ideas of revolution and utopia. Basically, we live in a society founded on a revolution that happened in the eighteenth century. The whole world is holding a very concrete utopia, the utopia that won the battle 20 years ago. The utopia of free market and individualism. But obviously things went wrong, and obviously we need to start again. It´s a great time to live. On the other hand, five days ago, a great guy here I know committed suicide. For some reason, he is still in my head, so I suspect that if things continue this way, maybe I will have to do a third project.

3. Tell us a little bit about your members?
I don’t have a permanent company. Each project calls for the group of people with whom I have to work. Those with whom I have had good experiences, or who I think they have an interesting point of view, are always present when I’m starting a new project. If I work with other people, I will have the opportunity to observe how they work, and learn more about them. I usually work with artists from other disciplines. These new ways of working enrich my own practice and are useful for expanding and creating mechanisms to learn something that I could have never imagined. For that reason, I also love to travel and give workshops. These meeting places are the triggers that makes me go to a new, unexpected direction.

4. What was the last piece that you saw you would recommend to the Network and why?
I have three. I recently saw Quizoola of Forced Entertainment, a group that I admire and who I think is fundamental. Another artist who I think is excellent is Romeo Castellucci. I recently saw his version of Dante´s Purgatory and I have to say it’s completely devastating. I also liked very much a version of Hecuba that is present in Buenos Aires right now, directed by one of my teachers: Emilio Garcia Wehbi. His work with tragedy is really powerful.