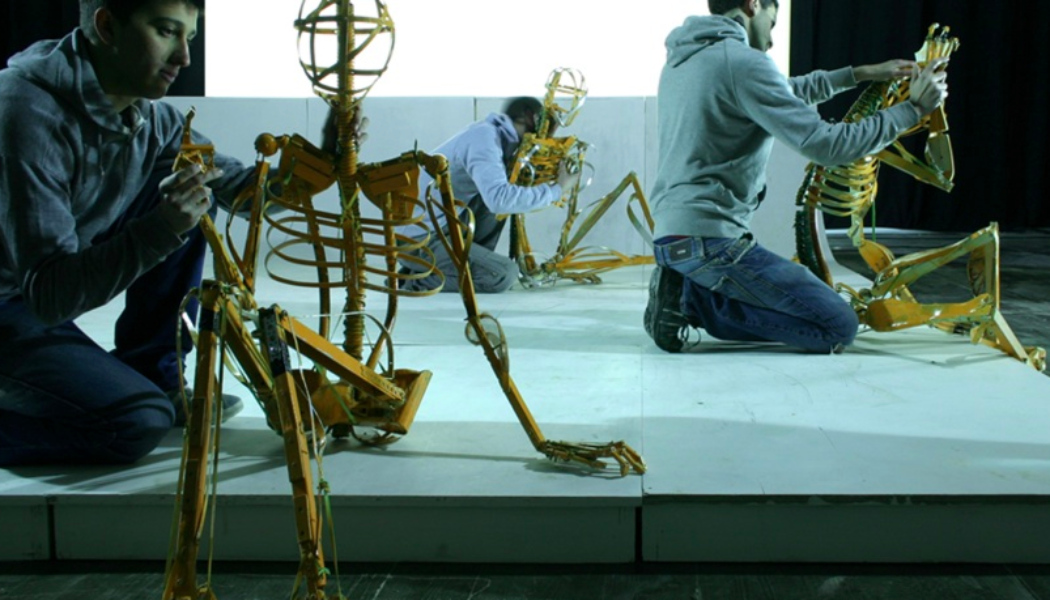 Pathosformel is Daniel Blanga Gubbay and Paola Villani, young artists based in Milan. Their work explores new ways of using the body on stage and radically experiments with movement and visual imagery. The Timidity of Bones was created in 2007 when it won special mention at Premio Scenario, Italian theatre’s leading awards celebration. In 2008 it was an award-winner at Sezione Autonoma in Cesena, an event established by Romeo Castellucci’s Societas Raffaello Sanzio.

An unbroken basketball training that, behind the image of athleticism and competition, let the eye perceive the world of relationships and intimacy existing among it. The relation between a man and his object has the same complexity of the one between two men? It looks like a fierce battle with the object but becomes the most persuasive of conquests; it assume the nuances of human life to return suddenly to be just a training: it is a duo choreography with just one man, who sketches the relationship in motion we always have one each other.

Three anatomical bodies have abdicated every impulse to be visibly modeled by the outside: my arms follow his movements, carving every single gesture; my chest slightly insists against his, to drawn an expression in its simple inclination. It’s almost an unarmed body, which – as a parasite – feeds himself with my movements.
Ecce homo: here is the man, a matter moved from the outside, in which every expression is made out of technical precision; in which even the simplest gesture is always helped by thousand muscles.

Eerily impressed into the surface of a large, luminous white screen, the outline of bones and skeletal forms appear. Perhaps the debris of buried civilizations, fragments build to form a floating frieze, and finally a body that evokes an unimaginably distant and mysterious past. Nose, thigh bone, knuckles and shoulder blade are broken up and shown through a thin epidermis that reveals everything and that allows a radiographic dance or a floating bass-relief to emerge.

A first square joins the scene, sliding on a system of parallel cables, followed by the live sound o fan harmonium and a violin. A space fills of thin colored squares, which seem to graze one against the other as walking men in a crowded public square. As in a magical tale, bodies have been transformed in anonymous shapes, waiting to be reconstructured by the spectator’s eye as human presences.

[The timidity of bones]