In Performance: The National Theater of the United States of America’s The Golden Veil (NYC)

By Caden Manson (Editor In Chief)on May 30, 2012
Comments Closed 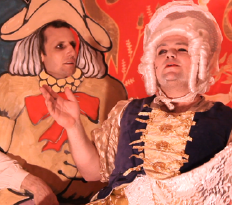 The Golden Veil is a gothic parlor spectacle that tells, in multiple iterations, the familiar tale of a poor shepherdess seduced and abandoned by a would-be inventor. Part pastoral ballet and part backwoods jamboree, part Punch-and-Judy show and part forlorn testimony, part bleak exposé of the lives of the rural poor and part celebration of their lovely handicrafts, The Golden Veil conjures the intimacy of a séance and the abandon of a hootenanny.

In the NTUSA’s inimitable style, The Golden Veil recounts a violent and lusty revenge fantasy, unfolding via the traditional domestic arts of reading aloud, singing along, making faces, charades and parlor tricks. Through the telling and retelling of the story, the play explores the ways that we use narrative to render the painful picturesque while it prods the perverse underbelly of our nostalgia for “simpler times.”