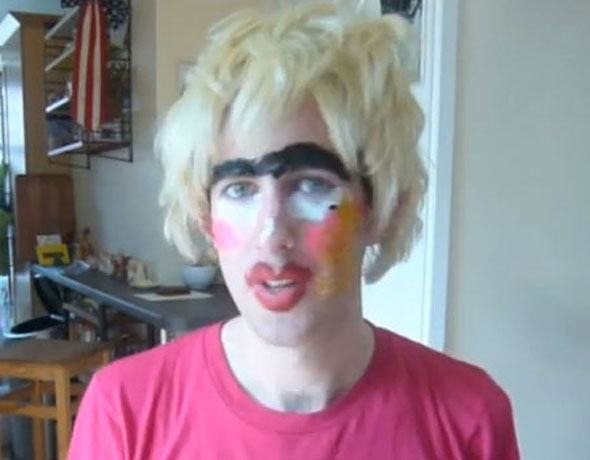 According to the British artist Paul Kindersley, the performance element in his work is, if not acted out, always suggested in his pieces. ‘They are props, which could be left over or yet to be used in some ritual. Objects placed in relation to one another, suggesting an intertwined movement or dialogue. They are pieces that long for something or someone, desiring a completion. Offering but never fulfilling a suggested narrative, one that can only be completed when the work re-enters a shared culture imagination, the interaction with the prop leaving behind a lingering residue. The hand and its marks are ever present, suggesting an interactivity and impermanence.’

I was introduced to Kindersley’s work earlier this year. I admired the relevance of both his live and video performances, in particular his YouTube based make-up tutorials. One particular video that caught my attention was his ‘Lesbian’ tutorial due to a comment that suggested he was making fun of the lesbian community. He was told to grow up, to which he replied that he was embracing his inner lesbian and that said commenter should try it.

Considering videos such as these to be art, rather than spoofs or parodies, allows us to acknowledge in greater detail the public’s response to this ever growing form of modern performance. A dialogue formed between an artist and an unsuspecting public blinded by the rigid, humourless media standards of beauty, internet protocol and etiquette. The viewers normality is called into question by such fabulous, upbeat, voyeuristic and almost troll like behaviour. People tend to take their online presence, appearance and the aesthetic desires of others far too seriously, especially when it comes to performance art. Kindersley presents a light hearted and incredibly entertaining response to a society obsessed.