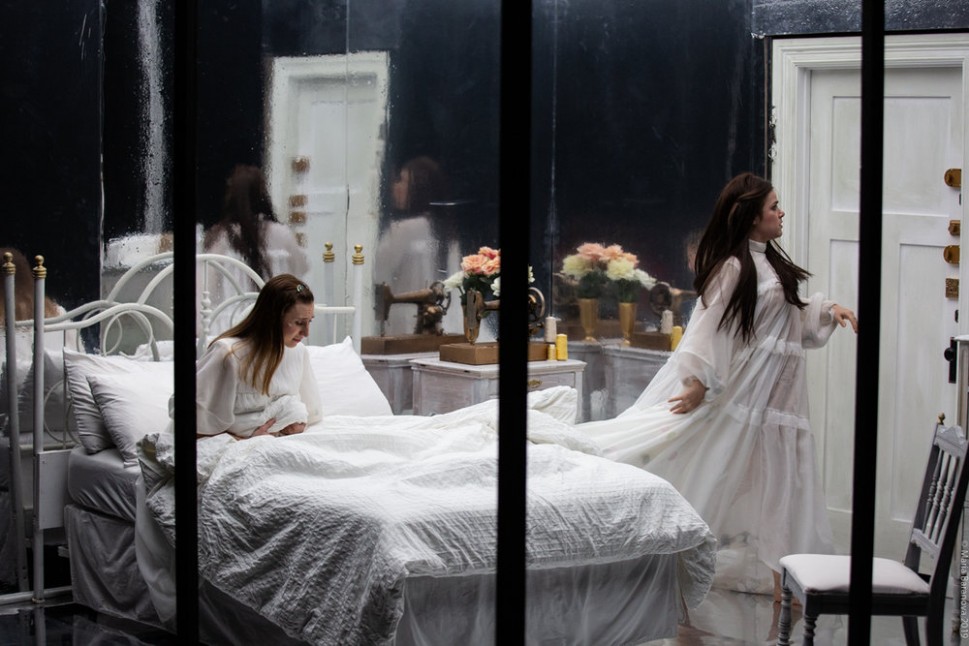 p r i s m is an opera about trauma. It is an exploration of coping, of recounting – of learning how to heal, how to find language again. We begin in a white, cut out square of a room. Our two characters lie asleep in bed dressed in long white gowns that speak of an imaginary mental hospital. Two walls are cut away to allow us into the cramped and intimate world of mother and daughter, psychological abuser and abused. Lumee at first seems to be taking care of her daughter Bibi – and Lumee is the one keeping her locked in this small room – but we quickly move into a ripping vocal exchange as Lumee blames, cajoles, shames and power-plays with badly-bruised Bibi (who is barely able to stand). We do not yet know what has happened at this point in the narrative, but the realistic purple of the bruises and emotional abuse are incredibly intense. As I observe the audience around me, people grip their hands and rock quietly while a surprisingly beautiful score sharply and mercilessly underlines the conflict. References to the colors blue and yellow become the language in which Bibi (bravely performed by Anna Schubert) and Lumee (Rebecca Jo Loeb) allude to the trauma underscoring everything. The choir, hidden out of sight, cries out as Bibi fails at an attempt to escape; darkness overtakes the stage moving into intermission.

As p r i s m moves forward, the journey does not get any easier. In the second act, disco balls swing menacingly as we find ourselves in a nightclub. Now costumed as a child, Bibi is dragged into the club while her mom’s quest to get into ‘the VIP section’ takes precedence. Bibi is left alone with dancers who represent the terrors and strangers that fill the club. Lumee’s bubblegum blue hair and busty pushup bring about a class-shaming aesthetic I was not comfortable with – but no time to dwell on such thoughts. As the chorus’ cries of “Bacardi” wind down, we witness an incredibly difficult rape scene that ends with Bibi frozen in the air, held up only by the forces of the dancers’ bodies. With no option but to keep watching, we are taken back to the cube from the opera’s beginning, now covered in the trappings of a tenement room. There is conflict, abuse and seemingly no hope. As the abuse and trauma mount, the chorus eventually cries out with “RUN! …RUN! …RUN!” Bibi breaks free, stepping out into the night alone. For a brief beat, Bibi is illuminated with white light suggesting a look towards her future before the evening comes to a close in a quick and decisive blackout.

I feel re-traumatized after watching this, but I respect and understand the desire to process trauma through art.

I am here as a witness.