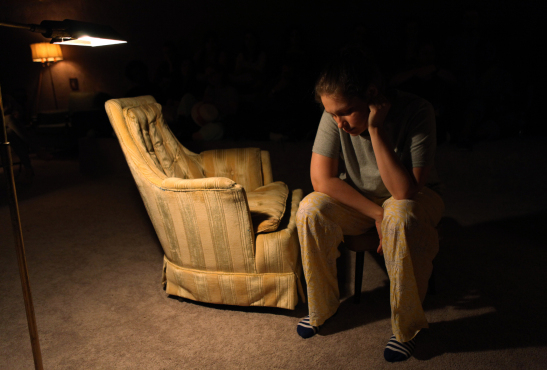 Matthew Maher and Kristen Sieh during The Wood Demon rehearsal

Soho Rep’s FEED is a curated program, founded by Raphael Martin, with “thematic live events, multimedia and publications that give you something to chew on before and after the show.” It’s a method to explore the ideas and dialogue raised by shows in production at Soho Rep. There are always live events to begin the conversation; these events are recorded and extended online. Content on FEED is especially rich in relation to the current production of Uncle Vanya. Some examples:

Rehearsal photos from The Wood Demon, an early sketch for Vanya:
http://sohorep.org/feed-presents-a-reading-of-the-wood-demon

And the show itself:
“You know, I used to think that being a creep meant you were sick or abnormal, but lately I’ve come to the conclusion that we’re all creeps. Everyone in the world, behaving naturally, is a complete creep.” Astrov

There are two reasons why Soho Rep’s production of Uncle Vanya reaches beyond traditional theater in dealing with Chekhov. One is language. Annie Baker, writer of The Aliens and Circle Mirror Transformation, creates an adaptation whose rhythms make sense to modern ears, even as the thorny engagements of bored people—stuck together as time passes—charges the performance space without any dramatic events to draw attention. The characters are both self-contradictory and argumentative; they think out loud, complain bitterly or with humor about their feelings and needle each other with their own past.

The other draw of the show is the performance space itself: carpet-covered, all of it. The floors where the performance plays out, the walls around the audience and the actors, and the risers upon which the audience sits, in some cases inches from the performers, are covered with the same thick-piled beige layer. We are all in this carpeted world together. These elements join to create a kind of rec-room logic which feels more like 1998 than 1898 (even though characters still reference their horses and the Russian landscape) in which pauses, fractures and dramatic litanies of the everyday feel as familiar as they did on the wood porch of your home-town house or in the back seat of your boyfriend’s Camaro.

Chris Mills (NYC, USA)
Chris Mills teaches in the Drama Department at New York University’s Tisch School of the Arts as well as in the Department of English. She also teaches at Playwrights Horizons Theater School. She has been published in Art Journal, Theater Journal, TDR, Frakcija, JAE: Journal of Architectural Education, Women & Performance: a journal of feminist theory, The Village Voice and in the books, Out of Time and Place: an anthology of plays from The Women’s Project Playwright’s Lab, and [1968]: Moments of Culture in Context.