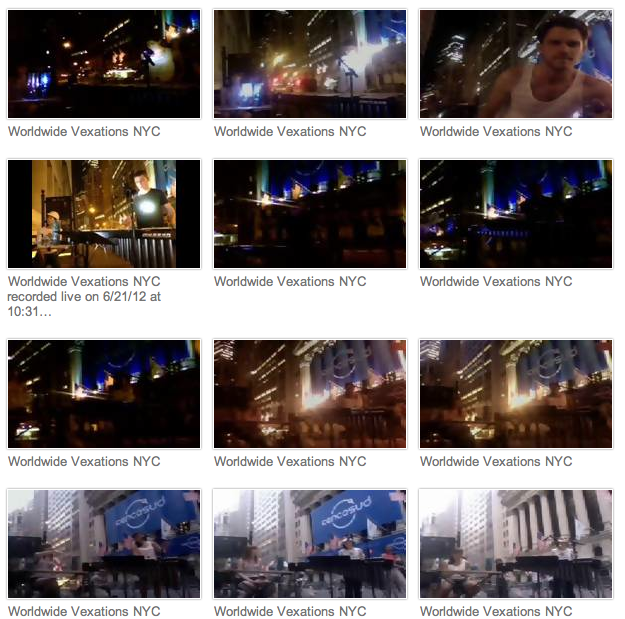 In a recent collaboration, musicians in cities around the world put together a singular performance comprised of 97 musicians in 16 different cities concurrently. This was broadcast on a central website via webcam.

The piece being performed was Eric Satie’s Vexations–a piece when performed in its entirety, is repeated 840 times, totaling an 18-hour performance. Very few other performances of the piece in its totality have occurred. The most notable being a performance put on by John Cage and David Tutor at the Pocket Theater in New York in 1963.

In the 2012 performance, titled Worldwide Vexations, performers would broadcast individual performances simultaneously from a central website, not only to complete the 18 full hours, but also to make a statement about collaboration in music. In theory, performers in each city would rotate through 1-hour shifts. However, only Seoul, South Korea had 18 performers to rotate through. For the rest of the cities, Vexations became not only a meditative repetition like Satie intended, but also an endurance piece–both mentally and physically.

Many interesting debates have been sparked by this performance–issues concerning the electronic age and its impact on the aura of live performance, issues concerning documentation and authorship, issues of interpretation, issues addressing the promotion of music, as well as issues of the corporeal form in an endurance piece such as this–all brought together on one central website, documenting the complete 840 repetitions of Erik Satie’s Vexations.

Kira Dralle (San Francisco, USA)
Kira Dralle is currently a Masters candidate in the History and Theory of Contemporary Art program at the San Francisco Art Institute. Coming from a multidisciplinary background of music and literature, Kira’s interests have always formed around the concepts and issues that have linked mediums at their core. Her work as both a practitioner as well as a theorist have centered around issues and theories of the corporeal body, the construction and performance of identity, and the socio-political implications deeply ingrained in performance. Kira completed her undergraduate work in Studio Art at Bradley University in 2008. Post-graduation, she travelled to New York, working in conjunction with many artists at The Center for Photography at Woodstock. Since living in San Francisco, Kira has worked with many organizations such as the nief-norf Summer Festival in Greeville, South Carolina, exploring the medium of contemporary percussion performance, HaveMind Projects in Oakland, California, writing on the interconnected nature of visual and aural realms, Root Division in San Francisco as an art educator, and the San Francisco Art Institute working with Dr. Daniel Hackbarth, PhD. Kira was also a guest artist and speaker at Bradley University in 2011, providing conceptual critiques in discussion with Anastasia Samoylova. Post-graduation, Kira plans to continue her research within a doctoral program in Performance Studies and Feminist Theory.