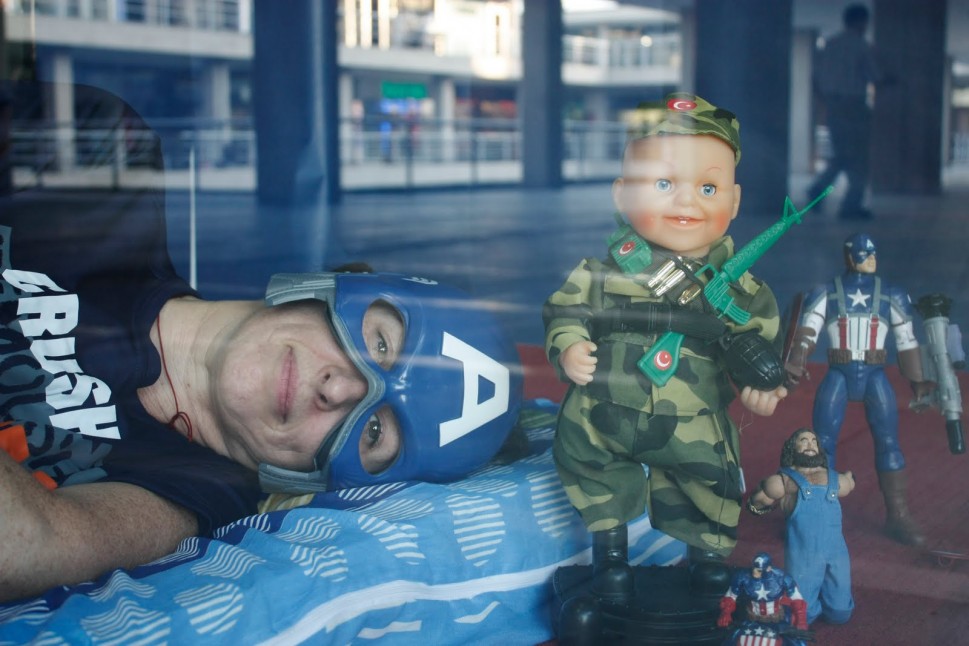 Kentucky is known for a lot of things, but, let’s face it, contemporary art isn’t really one of them. That is rapidly changing. Over the next few months, I will introduce you to some of the artists and organizations who are dedicated to performance and are helping to shape the conversation far beyond the borders of the Bluegrass.

First up is Doreen LaMantia Maloney. Doreen is currently Associate Professor of New Media at the University of Kentucky. She is a former President and founding member of the New Media Caucus.

She holds degrees from Indiana University and the University of Wisconsin-Madison in German, Russian, and Turkish History as well as a MFA in Fine Arts.

Her primary training was in dance for the camera and narrative video shorts. Through developing the new media curriculum at the University of Kentucky, her responsibilities and interests led her to teach a wide variety of courses and approaches.

Here are a few questions from our conversation when we sat down to explore how New Media and Performance are intersecting in contemporary practice.

TE: As a founding member of the New Media Caucus, what are the significant ways that performance and new media are beginning to intersect now/future?

DM: Members in the New Media Caucus have never thought of performance as outside of new media. The Caucus has always recognized that “new media” was absolutely inclusive and took as a given that contemporary art often involves some sort of sensory immersion that invokes some “media,” whether or not it be “the art” or just an intrinsic component of the overall experience, so a performance artist that uses media (or not as in my case in Istanbul) is still considered part of new media/new genre, inter-media, experimental media. We have never “sweated” the details. The New Media Caucus is about change, the now and the future, not defining what it is not.

TE: What interdisciplinary approaches are you teaching in the class room that combine performance with other area like new media, writing, etc.

DM: Over the last several years I have found my students needed support in their approach to conceptual art. Instead of teaching a class of “theory” focusing on post-modern writers, I began to offer open-media classes that are topical such as “Make Art with Freud, Jung, Lacan and Zizek”, or currently “Art, Death and Dying” which will allow them to focus on their own questions and explore a topic through their studio experience. It has been amazing. Often artists are perceived as non-intellectual in the U.S. I am all for reclaiming our roles as philosophers and offering alternatives to the culture to engage with these life processes.

TE: Can art be useful to society?

DM: Yes. Can I just say yes? This is such a broad question. Art has the ability for someone to experience the sacred. Even if it is just looking at your grandmother’s watercolor she made for you. On some level people keep these “sentimental” objects, because the sentiment it points to is something intangible in the marketplace. You cannot buy that “precious moment” no matter how many figurines you collect. Is that the same experience as experiencing a large Turbine Hall exhibit of Olafur Eliasson? Yes, more sublime, but at is core, it is offering something intangible and for a moment, sacred.

TE: Last year, you were invited to participate in the 12th Istanbul Biennial. Your piece was called “Boys Room”. Tell me about it.

DM: “Boy’s Room” was an installation and performance. I was invited to take part in “Desk Project” at the project space 5533, a parallel exhibit during the Istanbul Biennale, I began my research for a proposed installation and performance piece about male identity as represented in male dolls in the U.S. Shopping only at the mega store Walmart, I was shocked to find all the figurines were about aggression: war, guns, bombs or military vehicles or Justin Bieber. I purchased the seductive “Captain America” doll that plays the words, “let’s take them down” and a boy’s t-shirt that echoed the toy’s aggressive quality with the slogan, “Crush, Destroy, Win” as well as the Captain America mask and costume. In my opinion, the martial quality of these boy’s toys and clothing is a disturbing reminder of the U.S. global imperialism project, which has bankrupted our country and is fought most often by the poor who have no other alternatives but to enlist in the army to get a college education or to have a job. I find the irony of loving our children and wanting to keep them safe, juxtaposed with the toys we ‘can’ buy for them that encourages aggression and war to be obviously incongruent.

In Istanbul I continued my research by exploring the neighborhood next to Gallery 5533 where wholesale inexpensive toys were being sold for distribution to toy stores all over Istanbul. To my surprise, I found no Turkish military toys, only ambulances and firemen, with the exception of a child like doll dressed in military uniform doing a belly dance to Turkish music. All the military toys sold in Istanbul, were printed in English and often with U.S. flags, which disturbingly further underscored how the United States is commercially packaged as an ‘aggressor’. Continuing with the project on site and using both U.S. and Turkish military images and toys, I transformed the 5533 store window into a “Boy’s Room” and performed as a little boy acting out his fantasy of being “Captain America.” Workers from the shops next to 5533, most of whom where very conservative Muslim women wear hijab, only responded to the Turkish images and toys used in the window decoration, ignoring the “Captain American” toys, but at the same time, showing pleasure that I had made a project against warfare and aggression that encircles the world at this time. One woman said, I understand this is about Iraq and shook her head.

TE: Can you tell me a little bit about Gallery 5533?
DM: Gallery 5533 ( http://www.newmuseum.org/artspaces/view/5533 ) is an independent, nonprofit contemporary art space in Istanbul founded by in 2008, by artists Nancy Atakan and Volkan Aslan that presents and produces exhibitions, research, and debates. This is an off-space, located in an textile market in the city that features a range of women’s coats and hijabs for the conservative Muslim community the is present in the city. It is not a space in the trendy, western cosmopolitan downtown of Istanbul, and that make the engagement with the community that much more rich. Most tourists will never engage this community; it is easy for Turkish people to completely avoid them as well. As a result, 5533 has been emerged as an international interactive space that emphasizes dialogue, community engagement and a real “relationship” in your relational aesthetics. Recognized as a leader in this type of work by the New Museum in New York City it is currently featured as a site for contemporary performative, community-based work.

For more information on Doreen, you can visit her website: http:www.doreenmaloney.com