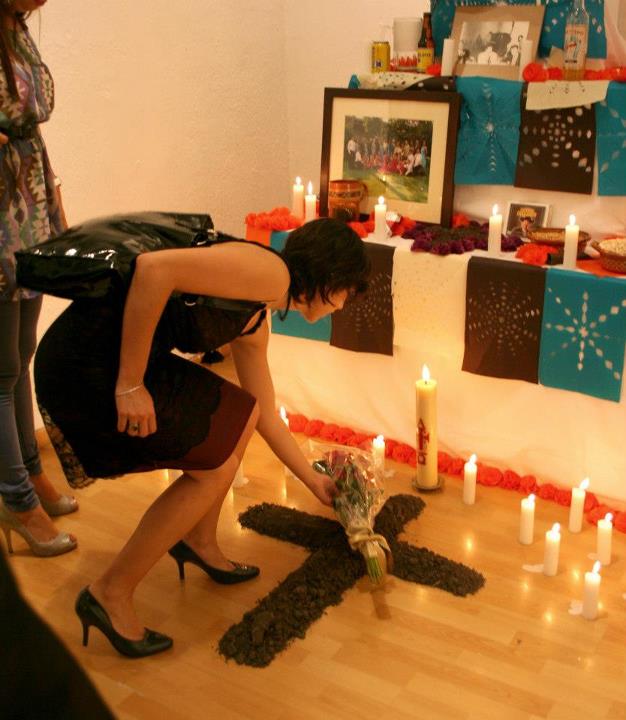 El Ausente: means “one who was… but is no longer.”

Viviana has developed as a painter in Mexico and Spain. However, during the past two years the approach to visual studies has made her work go from two-dimensional to multi-disciplinary experimentation.

Her work “El Ausente” is executed in a way that the poetic scenery can distract us into space and let performative implications in second place.

The assembly includes personal items of Mr. Juan Hernández García (Viviana´s recently deceased grandfather, with whom she always kept a close relation.), two racks, a mirror and a chair (these have the same arrangement they had in the house of Mr. Hernandez, therefore make public a private space), an audio file and a photo album which ends with a picture Mr. Hernandez coffin taken by Viviana and then included in the album.

“El Ausente” is a performance in which the artist includes her family and friends to carry out a ceremony of accumulation of memories. Viviana becomes a device of her own action to turn those memories into an altar. Upon being responsible for the provision of specific elements in a given space is running a stage for the perception of absence. It is a performative action in which the artist functions as narrator and object.

The action-scene-object relation is a scheme used in art, however Viviana Martinez has the ability to perform the action at the same time she abstracts herself and becomes an element, not metaphorically but essentially, transferring the narrative role between body and object.

The objects of “El Ausente” will be on display in The Ex Convento del Carmen (Guadalajara, Mexico) through September.