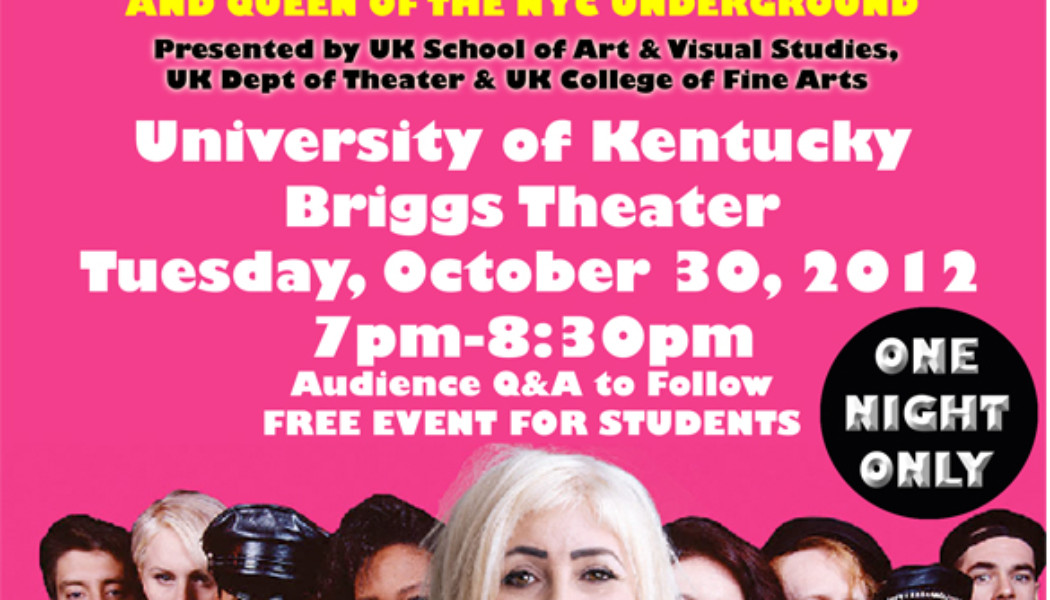 Legend, icon, wild-hearted bad-girl… it is impossible to describe the juggernaut that is Penny Arcade without entering the world of hyperbole that she not only inhabits but also personifies. By fearlessly displaying her singular brand of feminist sexuality and personal conflict she has garnered countless fans worldwide with an emotionally and intellectually charged performance style.In this one night only live event in University of Kentucky Briggs Theater, Theo Edmonds (CPN Regional Editor) interviews Penny (ala “Inside The Actor’s Studio Style) about her legendary life. From her early days as a superstar in Andy Warhol films and as a founding member of Playhouse of the Ridiculous… to the sold out, highly acclaimed 20th anniversary revival of her one woman show this past summer in London (Bitch! Dyke! Faghag! Whore!)… and things in between.

As London Time’s theater critic, Donald Hutera, wrote in his 4-Star review of her show this summer:

“…former Warhol Factory superstar and Quentin Crisp’s soulmate, Arcade, 62 this month, drips avant-garde street cred. This short, mouthy and busty platinum blonde firebrand knows and celebrates her place in history but expands upon it, enlarging her target issues — primarily the socio-political implications of sex and censorship — in shameless and enlightening ways.”

Event is free and UK Students will be given priority in this limited seating event.

Made possible with the support of UK College of Fine Arts, UK School of Art and Visual Studies and UK Dept of Theater