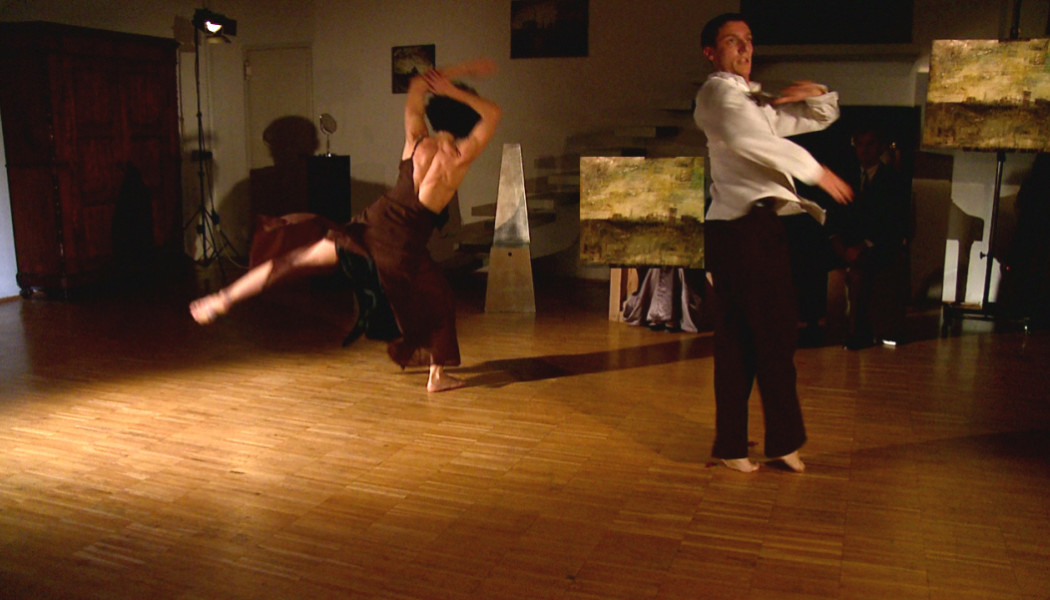 An international project on choreography, art, and dance-theatre.

Seven days of shows, performances, laboratories, workshops, ideas, meetings and cultural exchanges. From 24 to 30 November 2012, day and night, people will have the possibility to dive into the world of art, of dancing, of theatre and of the stage, getting the chance to meet all the artists attending in person.

Coreografia d’Arte is the result of an inter-disciplinary work on the languages and contents of choreographers, directors, painters, sculptors and photographers.

Since 2009, choreographers coming both from Italy and abroad have taken part in the project to put on live shows inspired by works of such artists as Lucio Fontana, Emilio Tadini, and also by those of many young names of the art world.

The 2012 edition (taking place from 24 to 30 November) will be attended by choreographers coming from Italy, Venezuela and Austria, and by ten artists, among whom a Spaniard and a Chilean.

Through the Festival, a laboratory of creation, contacts, work, education, research and exchange for Italian and European artists has been created over the years.

The last edition saw the involvement of new places and people, to prove the idea that art and theatre speak only to a selected public wrong: bookstores, art spaces, public spaces for entertainment (into which the format “Attentati di Danza”, “Dancing Attacks”, was made), associations, independent realities of art production and distribution, individuals and groups.

This way, the foundations were laid to create an inter-disciplinary network aiming to give power, dignity and visibility to one of the few languages that are able to communicate in a universal and immediate way: dancing.

This year, the festival is the product of a long-drawn-out work on the issue “Space, body and power”, which investigated man’s space, and included the presence in Milan, with a live interview at Spazio Tadini, of the Israeli choreographer Emanuel Gat.

Milanoartexpo (MAE International Art Events) is going to be the media partner of the event, which will take place, as it did during previous editions, at Milan’s Spazio Tadini. A place that is intentionally non-conventional, that was born as a space where artists and the different arts can communicate with one another; a crossroads for art-makers, a breeding ground of ideas and projects for art and culture, a laboratory which aims to be vital and challenging especially towards young people.

The people behind “Coreografia d’Arte” are Francesco Tadini, a director, founder of Spazio Tadini and creator of Milanoartexpo, and Federicapaola Capecchi, a choreographer who in 2008 made her debut at the 6th International Festival of Contemporary Dance of the Venice Biennale – Choreographic Collision part 2 -, working with Spazio Tadini as a member to foster the research, quality, accessibility and increase in value of dancing, of theatre, of the stage and of live shows.

During the Festival, under the artistic direction of Federicapaola Capecchi, several workshops and a laboratory on choreographic research and composition will be held. The aim of the project is to spur the choreographer/director, dancer/actor to give shape and to model a creative, interpretative and performative quality of his/her own, by elaborating and composing starting from one or more artworks. Two of the participants, after reaching the end of the project, will be invited to present a performance/ work in progress of their own for the 4th edition of “Coreografia d’arte” in 2013.

Eleonora Soricaro (Italy)
Born in Milan (IT) in 80's, a degree in Communication Studies, a past as videomaker and a present as contemporary dancer. I try to experiment a personal performing language that contemplates both a movement language and a research approach, that aspire to a "depth of field" idea of dance and choreography. And that's also what I love to see as audience. I live in Milan, near an ex-cinema and ex-ballroom called "Il bomba" (I made an étude about it).