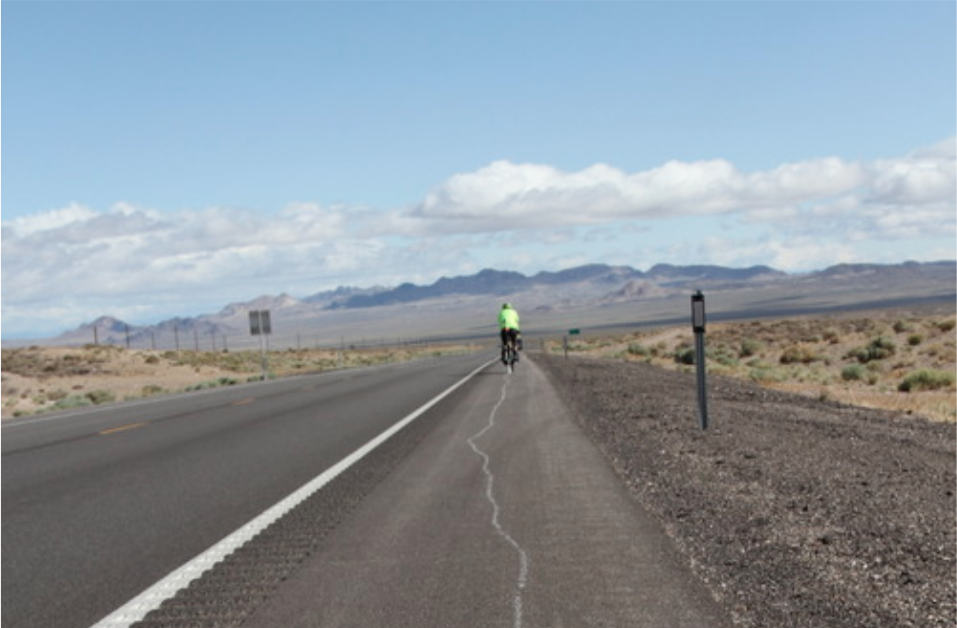 Last week, media artist/activist Joseph DeLappe physically and symbolically drew a line around the Nevada Test Site, Yucca Mountain, Nellis Air Force Range, and Area 51, creating a 460 mile long chalk drawing. Riding a long-tail bicycle, which he reconfigured with an armature to hold handmade chalk, solar panels, video cameras, and a GPS unit, DeLappe delineated a geographical area equal to the measurement of a solar farm the Union of Concerned Scientists estimated would be “more than enough to meet the country’s entire energy demand,” or 100 square miles. http://www.livescience.com/3115-energy-debates-solar-farms.html

In a durational/endurance performance, DeLappe rode the bike approximately 50 miles per day for 9 days in the desert above Las Vegas, NV, dragging the chalk behind him on the road and encircling the federally confiscated lands that are the largest peacetime military base in the world: area of 928 nuclear tests; testing of the U-2, stealth, and drone aircraft; and continued testing ground for bombs, training area for the US military, and site of weapon/technology and energy development. During the 460 mile ride, DeLappe had to stop to change chalk approximately every two miles, enduring 8-11 hour days on the bike in upwards of 95 F degree heat or 40 mph desert winds.

Conceptually, “Project 929: Mapping the Solar” is an ideational and activist exercise towards representing another possible choice we could make as a nation, physically re-imagining geographical space for energy sustainability. To map this desire – become a moving point, line of battle or communication, contour of an idea, measure or guide – was a driving principle.

The project was also documented by artist and writer Laurie Macfee, creating an archive of photographs, and off-bike video. I. Examples can be found on the blog: http://www.project929.com A short video documentary can be found here: https://vimeo.com/67681957

In collaboration with Manifest AR, selected photographs will be used post-project to create a locative media tour using augmented reality to permanently document the ride. Anyone with a smart phone or tablet will be able to visualize gigantic solar farms spreading across the empty desert, tied to precise GPS located images of DeLappe on his ride.