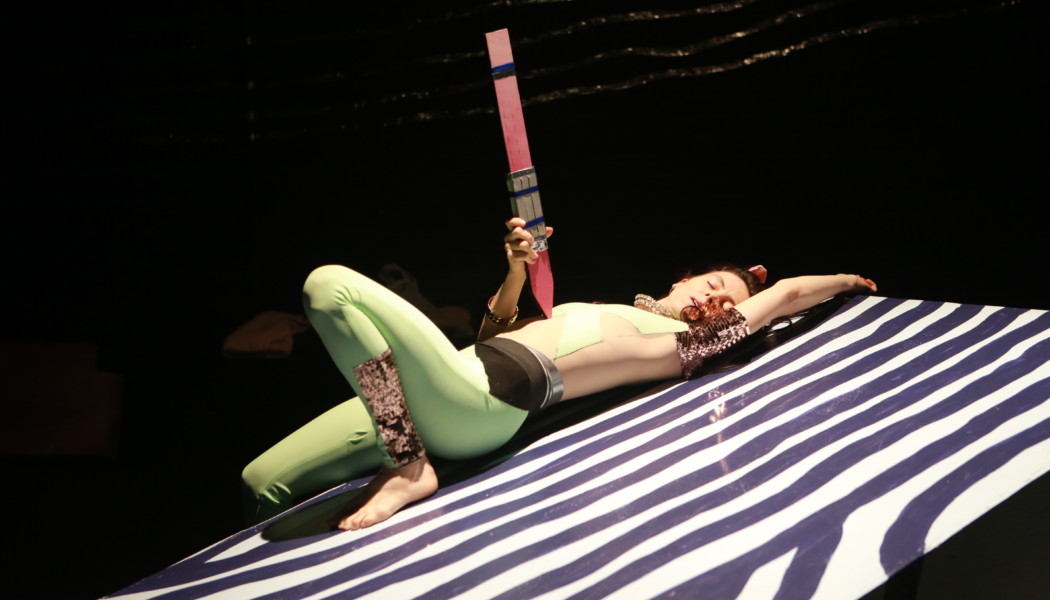 TICKETS
Tickets are $15-20 and can be purchased online at http://liveartsexchange.org/tickets/
Early bird festival passes available until August 24

Los Angeles Performance Practice and The Bootleg Theater announce the lineup for the second annual Live Arts Exchange (LAX) Festival, a performance series featuring local artists in contemporary theater, dance, music, and cross-genre performance. LAX promises to showcase some of the most innovative artists and independent companies in LA, create social events that encourage cross-genre hangout, and play an important role in the elevation of Los Angeles performance work within national and international networks.

The 2014 lineup features work a female-heavy population of LA artists, plus two out-of-town projects that have achieved national acclaim in other cities.

DEDICATED TO A TRUE LOVER (and therefore probably nobody) by Zoe Aja Moore and company is a theatrical encounter with the work of German auteur Rainer Werner Fassbinder, and a study of his meta-autobiographical Beware of a Holy Whore. It is participatory and a bit delirious, and examines the brutality of artistic creation.

Phil Solanoff will join the lineup from New York with AN EVENING WITH WILLIAM SHATNER ASTERISK, a video/performance hybrid that meticulously catalogues Shatner’s words from the original Star Treck series, creating a dynamic Shatner oracle that relays a message about contemporary art and science from the future.

Portland-based musician Holcombe Waller joins an LA-based design team to present SURFACING, Waller’s Los Angeles premiere. The piece employs his signature collision of song, storytelling and visual stage picture to reassemble the stories of characters collected at a living room party- including a bit of perspective on the 2011 Marina Abromovic/MOCA Gala controversy.

Show Box LA is partnering with LAX to co-present ACTRESS FURY by Grand Lady Dance House, magnetic performer Jennie Mary Tai Liu’s company. ACTRESS FURY made its US premiere in New York at the Bushwick Starr earlier this year, and will be staged not in the theater of the Bootleg- but in the dressing rooms downstairs. Show Box LA is also co-presenting a new work-in-progress by choreographer Meg Wolfe called NEW FAITHFUL DISCO, featuring Taisha Paggett and Rae Shao-Lan.

The festival will officially launch on Thursday, September 11 with the LAX ARRIVAL performance party curated by Nicole Disson, producer of THE SERIES, a multi-disciplinary production and event previously set on the rooftop of The Standard, Downtown LA that cross-pollinates a social experience with the performing arts.

One slot remains open for this year’s LAX. The festival’s producing team is now accepting submissions that are new works-in-progress to highlight in the festival’s final weekend. Artists can submit work by visiting liveartsexchange.org.

The Bootleg Theater is a year-round inclusive art space for original, boundary-defying live theater and performance born from the diverse cultural and artistic landscape of Los Angeles. Bootleg supports and collaborates with the best of established and emerging theater artists to create daring multi-disciplinary live experiences that are striking, contemporary and non-traditional. Recent productions include Death of a Salesgirl, Rodney King, Theatre Movement Bazaar’s Track 3 and A Fried Octopus. Bootleg features work from renowned artists and theater companies such as: Rogue Artists, The Secret City, Soul Lab Dance Project, Paul Zaloom, Latina Dance Project, John C. Reilly and many other local artists. Bootleg hosts the monthly literary bloodsport event Write Club LA and seasonal Ladies Arm Wrestling for charity: LA LAW. Bootleg was recently awarded a citation for excellence in the arts from their new Councilman Mitch O’Farrell. Bootleg Theater is an award winning theater that has created a space for Art, a celebration of Los Angeles itself.