In Performance: Half Straddle’s Ancient Lives at The Kitchen (NYC) 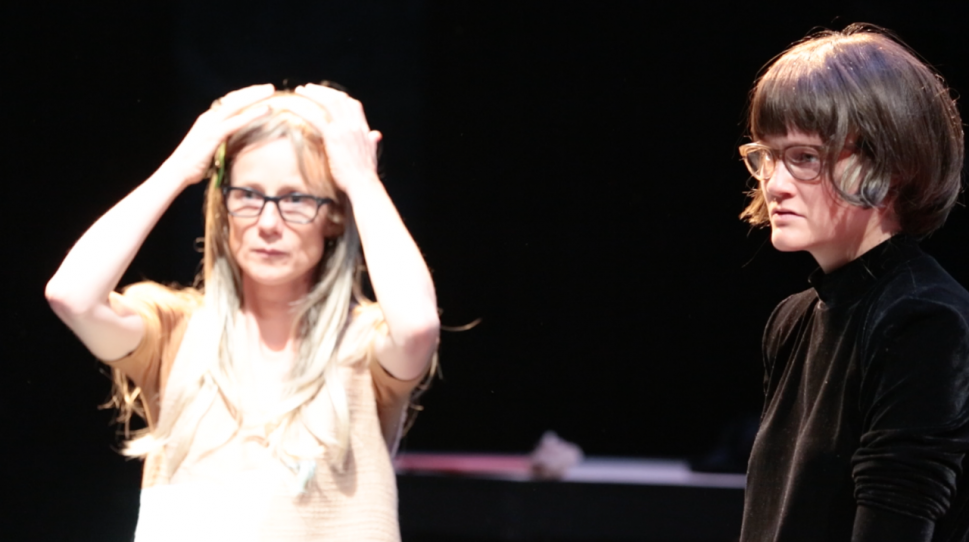 In Tina Satter’s newest flickeringly emotional landscape a high school elocution teacher, Paula, (Elevator Repair Service veteran Lucy Taylor) absconds to the woods with three devoted students, where they establish their utopia. There they encounter Morris (Jess Barbagallo), a male witch (or tiny warlock?) who introduces them to the world of broadcast media.

Our friends in the woods communicate largely by quoting Paula’s holy texts at and to each other. Paula’s curriculum includes Romeo and Juliet, Walden, and The Crucible. To audiences who caught Satter’s Seagull (Thinking of You) these appropriations of dramatic chestnuts will be familiar, and given the sophistication and abandon with which Satter operates in this mode, deeply exciting.

Watching Ancient Lives, I was reminded that Satter’s most recent show, House of Dance, was produced by Richard Maxwell’s New York City Players. Satter’s actors occupy a territory of performance aesthetic that resonates in the same zone as Maxwell’s recent work (ISOLDE at Abrons Arts Center). Studiously precise and somewhat clipped, unpredictably bleeding into not-quite-suppressed emotional outbursts, Satter and Maxwell’s actors deliver their texts with a neutrality that invites an audience to read meaning on multiple simultaneous levels. Far from placing their material at an ironic distance, the performers in Ancient Lives feel volatile and vividly present, even as the narrative can seem elusive and obscure at points.

Written and Directed by Tina Satter

In Performance: Half Straddle, Is This A Room: Reality Winner Verbatim Transcription

In Performance: Electric Lucifer (The Kitchen)