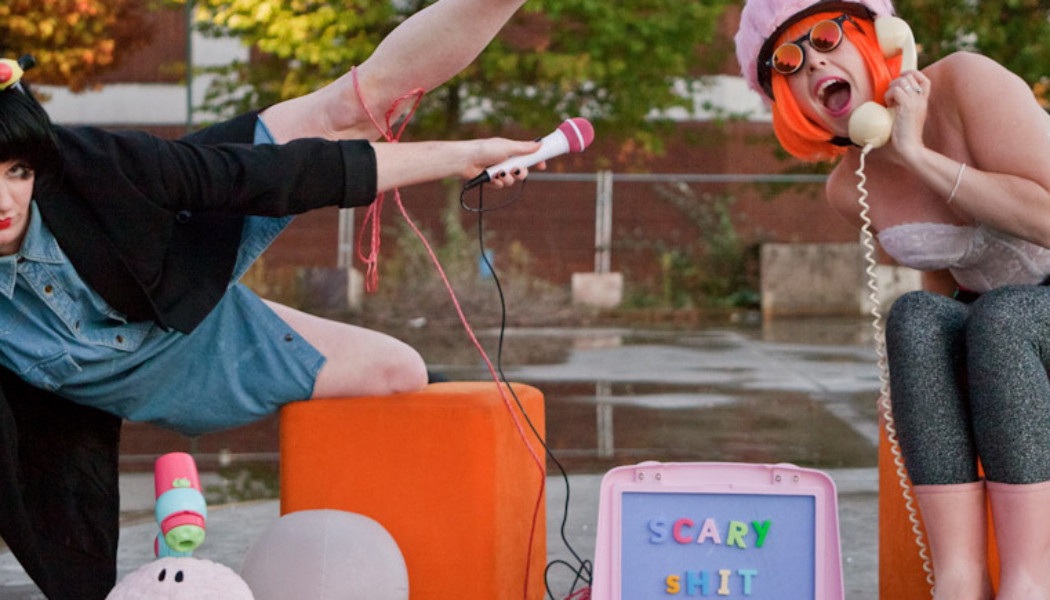 The Sprint Festival at Camden People’s Theatre, an annual showcase of innovative work from around the UK, wrapped up on Sunday. Keep an eye out this week for round-ups of work from throughout the festival.

Rhiannon Faith, a disarming, highly personable performer, creates “autobiographical shows exposing the impulsive, messed-up and multi-faceted aspects of humans.” Her new work Scary Shit has a vibe like a buddy movie w/ Rhiannon Faith as the bubbly leader and Maddy Morgan as the reluctant, curmudgeonly sidekick. Faith and Morgan are undergoing six weeks of therapy to learn how to face their fears, and this mix of dance and storytelling is inspired by their efforts. Simple props such as a pink poncho with room for two, a pink furry helmet, a pink microphone, and inflatable blue boxing gloves all serve as powerful images as they appear and reappear in conjunction with repeated movements. The caliber of scary goes from funny (arachibutyrophobia: fear of peanut butter sticking to the room of your mouth) trough the thoughtful (“Smear Test” discusses the fear of sacrificing a career for a family, of never being able to fit a child into an artistic life, of finding a gulf between you and friends your age who have children and can’t imagine what you’re waiting for) to the casually chilling “scary shagging” section (featuring stories of unwanted encounters scary in how matter-of-factly they were related). Once you start considering how seldom we admit to being afraid, the improvised ‘things that scare me” list Faith shares at the end of the show seems particularly brave.

Almost Human presents Dante Undone, a live film retelling of Dante’s Inferno performed to a track of narration and music with teeth-rattling bass. The story is told using a mix of low and high-tech methods: a green screen rig complete with a video camera and lighting that all rotates 360 degrees; live charcoal drawing on a hand-rolled scroll; figures laid out and labeled throughout the room that represent the denizens of hell, whisked away by puppeteers in green onesies to serve as characters in the narrative. The set-up is impressive, and the manipulation skillful and effective, creating a fascinating collage of live image. The question of how the audience fits into the set-up seems to be an evolving matter. Finding a place to stand where one can see the screen and the puppeteer’s manipulation while avoiding obstructing another audience member’s view, being struck by the revolving greenscreen rig, or moved down by a be-onesied cast member was an ongoing battle. In the end, the spectacle provided an intriguing journey into the underworld.

Via Collective is “made up of both scenographers and performers that are passionate about generating visually and physically charged work.” Their new work Fleet is themed around journeys, and plays with duration, repetition, and group movement. It begins with the ensemble rotating around a central point like a home-made solar system until a buzzer goes off. Later, the group repeats the refrain, “Don’t hold a grudge; it brings you down,” interspersed with long pauses. This went on long enough that the audience began filling in the upcoming pieces of the song. Parts of the piece indeed feel like going on a journey: like when you’re driving through Nebraska and the changing numbers on the mile markers are the only thing that proves you haven’t actually entered a time loop. There’s also the sense of seeing from your passing vehicle strange landmarks that seem to belong to an unfamiliar culture, such as the physical structures the ensemble builds with their bodies around a leather armchair.

Sub-Sublime’s Here We Come Together, Here We Fall Apart

Sub-Sublime’s eight-person ensemble created a complex and active performance based around the idea of encounters with strangers on London’s public transport. The magical realist themes of the story were in parts reminiscent of Neil Gaiman’s Neverwhere. However, without guidance from the program notes, the narrative was quite opaque. Three entwined stories are presented: two deities (perhaps?) playing games for territory in London, two mischief-making spirits of some kind keeping score as they respectively encourage and discourage a budding romance on the bus, and a girl who’s in love (maybe?) with London itself. On the narrow alley stage, with so many performers in constant motion, the action was difficult to follow. This new piece from a young company will doubtless continue to develop, as Sub-Sublime is currently making arrangements for an extended run.