In Performance: Pancho Villa From A Safe Distance (Prototype) 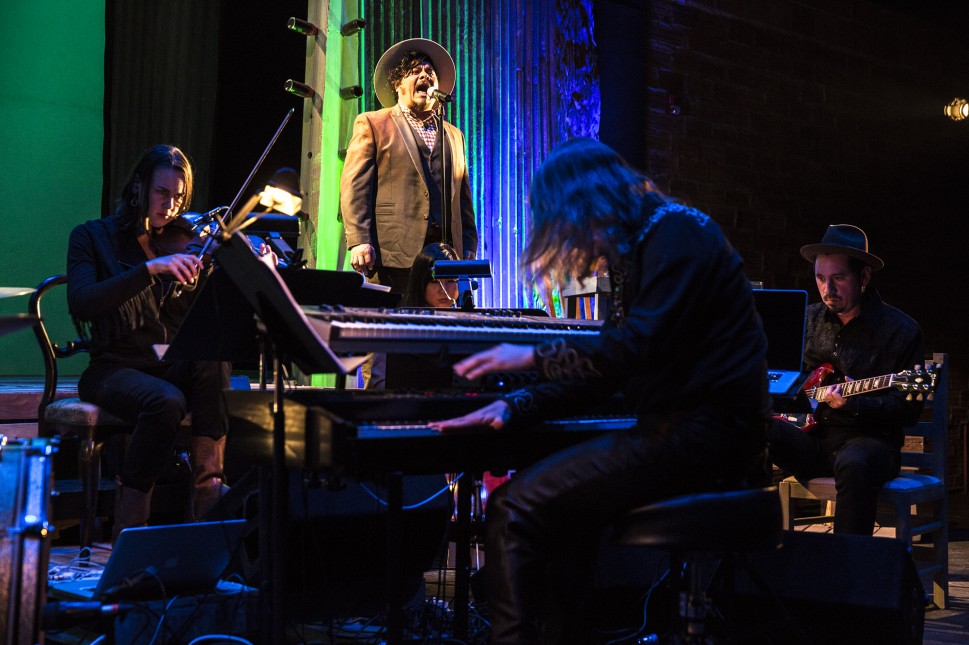 Pancho Villa From A Safe Distance
Composed by Graham Reynolds
Libretto by Largartijas Tiradas Al Sol
Directed by Shawn Sides
Prototype, BRIC
January 5-9, 2019
Walking into Pancho Villa From a Safe Distance, you see an expansive spread of instruments arranged in a cluster taking up most of the stage: a double stacked keyboard, a full drum set, an electric guitar, a tuba, a double bass, a cello and a violin. Interspersed among the musicians, tables are covered with photographic paraphernalia, live cameras and a video footage of the yet-to-be-introduced ‘El Tigre.’ The work begins with an explosion of sound as a fusion of rock and roll and more recognizable styles of operatic singing fuse with latin rhythms joyously ringing together. This bilingual experience rotates between songs in Spanish paired with English subtitles half the time, vice-versa the other half. Roving live cameras operated by performers Liz Cass and Paul Sanchez deepen the feel for the mythical ride you are about to embark on as their powerful voices cry out over photos of Pancho Villa and company.
As the pieces unfolds, you are navigated non-linearly through the events that would shape the stories of, and blurred truths that would emerge from, Pancho Villa’s life. The Mexico City-based collective Lagartijas Tiradas Al Sol does a beautiful job capturing enough of a narrative to ground the fantastic range of musical jumps that Reynolds has composed. Steering the double keyboards/synth himself, he presents sounds ranging from a classical piano to digitized banging sound effects of galloping horses, or maybe gunfire. Under Shawn Sides’s direction, Villa’s complicated, problematic and idealistic history is collaged into the work, and a proto-Warholian image curator version of the protagonist begins to emerge.
Wealthy gringos would pay to watch Villa’s battles from a safe distance, for their own amusement. Footage capturing this viewership is played as the two vocalists sing considerations and observations about the paying observers. Marching-band-esque tuba rhythms and pointed electric guitar solos underscore these lyrical back-and-forths. Pancho Villa even recruited Hollywood to make movies about himself to bolster his own legend (and to try to attract support) – half the movie proceeds would go back to Villa to fund the revolution. This theme of safely, passively witnessing revolution unfolds as we learn that the U.S. would eventually betray Pancho Villa. In some moments, it is hard not to think of the situation at the border today. These parallels are drawn for us explicitly through the video footage of ‘El Tigre’, a 19-year-old Mexican man from a working class background whom the artistic team met while doing research. We watch him seeking to commune with the spirit of Pancho Villa, which leads him on a trip across the country. This searchingly earnest journey ends with El Tigre talking to the camera – to the audience – about why he is so fascinated with Pancho Villa’s convictions. He too, wants for “the bad government to go away.” As I continue to enjoy what is a truly mesmerizing concatenation of music, history and politics, my own thoughts are drawn to the border. What am I doing? Am I just paying to watch from a safe distance as I read New York Times articles about how bad it is to be there? How might I first imagine and then enact the bad government away? What can I learn from El Tigre? I think of the children dying at the border and how I am paying to fund these atrocities with my tax dollars. I raise my binoculars from a safe distance, just like the gringos of 1912 did. Walking out, I am inspired to do better. I’ll end here by saying some of the names of the most recent child victims of negligence at the border and work towards imagining a better (and more informed) future. Felipe Alonso-Gómez. Jakelin Caal Maquin.
Hats off to the whole team for such an engaging and (unfortunately, continuously) timely opera.