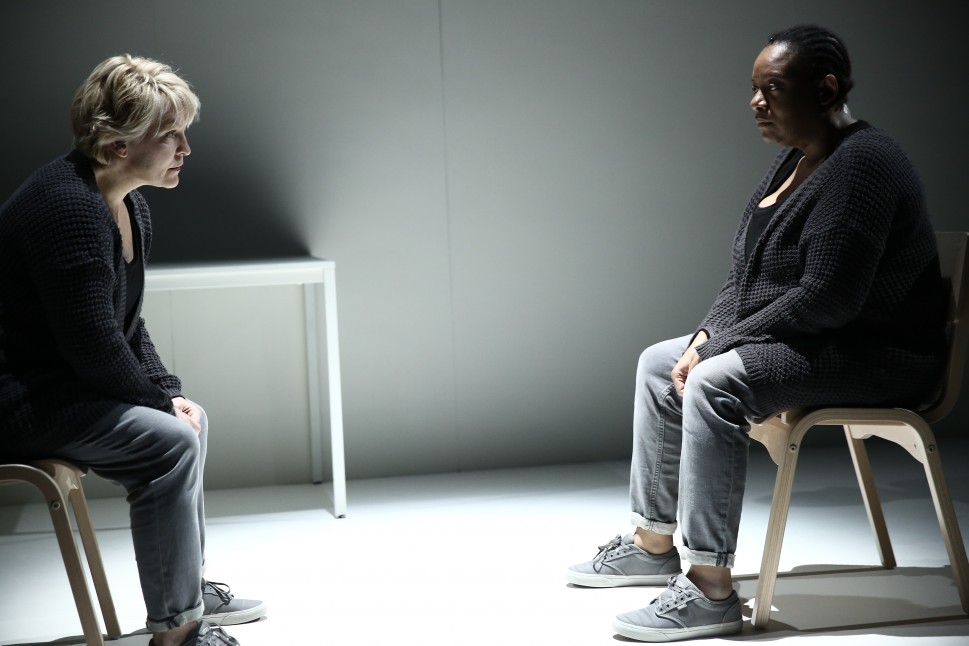 Sarah Kane’s classic 4.48 Psychosis takes a stirring, operatic turn in Philip Venables’ adaptation, currently playing at the PROTOTYPE festival after a sold-out run at the Royal Opera House in London. The opera uses a variety of inventive means to bring Kane’s words about death to life, with a mix of sung, spoken, slurred, and projected text. The accompanying music, performed by the ensemble Contemporaneous that is situated hauntingly above the stage, intensifies the anger and pain of the play. In a series of especially effective exchanges, the dialogue between the central, suicidal figure (played by Gweneth-Ann Rand) and her psychiatrist (played by Lucy Schaufer) are not spoken at all. Instead, as the two stare relentlessly at each other, the words appear on the wall behind them to the timing of two musicians (Clara Warnaar and Amy Graphic), located at extreme ends of the orchestra above, who use drums, bells, a hammer to a pipe, and even a saw to cut and beat out the lines. The combination allows those exchanges to penetrate deeply into the mind and body.

While those moments are often marked by a stillness on the stage, other moments explode with action–from Rand and Schaufer and the powerful four-member chorus who play different elements of the central figure’s psyche–and are all jarringly accompanied by the orchestra’s cacophony of sound. A sequence that records unsuccessful attempts at psychotropic medication is particularly forceful and memorable, as is a recurring sequence that features the mental test in which someone attempts to count down from 100 by 7s. On and off throughout these sections, the performers throw themselves around the stage, and when the sections end, the performers’ breathing remains audible, as does one strand of the score, which lingers and turns into something all too recognizable and real–like the wail of an ambulance siren rushing to save a woman who has attempted to commit suicide. Per the play, and Kane’s own life, we know that the attempt will ultimately be successful, though. In this adaptation, as in the original, the curtains are still, finally, asked to be opened.

In Performance: Pancho Villa From A Safe Distance (Prototype)