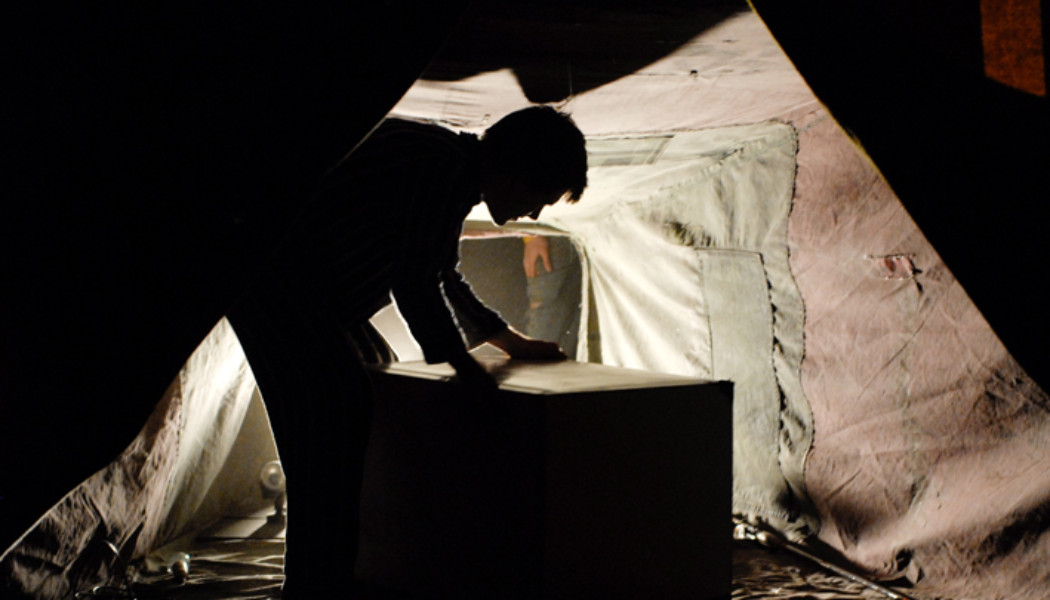 Matthew Prest draws on installation and performance art to create work. His practice is multi-disciplined and the form shifts from project to project. At the heart of his work is the question of what is the experience for the audience, creating a world in which the audience’s senses are heightened.

He works in collaboration with a group of artists, with a cross over between roles and disciplines. Previous collaborators include: Clare Britton, Danny Egger, James Brown, Hallie Shellam, Janie Gibson, Eddie Sharp, Halcyon Macleod.

The Tent premiered in May 2008 at the Next Wave Festival, Melbourne. It has since had seasons at Liveworks Festival, Performance Space, 2008, Campbelltown Arts Centre 2009, Darwin Festival 2010 and Perth Institute of Contemporary Art 2010.

Hand built by the artists out of scrap metal and old, oil-stained truck canvas, The Tent sits at the crossroads of installation art, puppetry, video and performance. Led by Michael, an audience of 25 is invited to step inside the story of an unlikely male friendship in an exploration of self-sufficiency and prolonged adolescence.

The small audience of 25 steps inside a makeshift canvas tent, the home of Brett, a DIY bush philosopher who’s a cross between the unabomber, a character out of Northern Exposure and bush tucker man. In his 50s, Brett has slipped through the cracks of society and having once been an academic he now lives a hermetic existence in his self made tent. His dream being to turn the tent into a travelling ‘Chautauqua’, a tent of ideas in which he will have a platform to espouse is theory of everything while creating a communal space where people can exchange ideas ‘in the flesh’.

The premise of the show is that the audience are going to hear Brett give one of his talks, but as the audience arrive at the site of the tent, Brett drives off and they enter the tent, take a seat and wait. There is the aroma of a warm beef stew on the cooker and the tent is decked out with a bed, armchair, lamp, reel to reel tape deck. In the audience is Michael, a mid 20s office worker who once lived with Brett. he He begins to agitate, suggesting to the usher that the audience start on the stew seeing Brett has abandoned the scene. Michael starts to take on the role of storyteller, recounting the period of time he spent with Brett. He takes of his workclothes to reveal a pair of dirty pyjamas and tells of how he had still been living with his parents when one day he woke up and walked out the front door and just kept walking. Sometime later, on the outskirts of a city, he came to a hole and gently fell in. Brett found him and pulled him out and they lived together in the tent for about 6 months. A wall of the tent lifts up to reveal curtains and a little tunnel that becomes a stage. The performance then shifts into a more visual mode of storytelling, using puppetry, video and an unfolding set design to evoke a feeling of memory. The story itself is simple. Michael epitomizes the term prolonged adolesence, presented with the privileged choice of being able to do whatever he wants with his life, he chooses nothing, paralysed in an existential malaise. When he finds Brett, he sees someone who embodies an alternative way of being and looks up to Brett as a mentor. While Brett is essentially flawed and a bit of a failure, the two develop a genuine friendship. This falters when Michael comes across a ‘lost’ cow in the bush. Seeing it as an opportunity to experience ‘living off the land’ he suggests they slaughter it for it meat. It is an act which brings into question the friendship and Brett disappears soon after. At this point in the story, the audience a brought back to the present, to the fact that they are in Brett’s tent waiting for Brett to come and do his talk, having made themselves quite at home. Michael breaks from the story and suggests that its not such a good idea them all being there and gets everybody to leave, but just a they’re about to, Brett returns. What follows is an awkward exchange, which sees Michael depart and leaves the audience with Brett, and his chautauqua.

The Tent was created by Matt Prest, Danny Egger, Clare Britton and Eddie Sharp. For the 2010 tour, the show was produced and performed by Tony Osbourne, Tamara Rewse and Cameron Searl.

This animation is a prelude for the upcoming theatre piece “Hole in the Wall” : premiering at Campbelltown Arts Centre in late April 2010

Hole in the Wall is a 50 minute piece of theatre that uses installation, animation, text and performance to explore ideas of domesticity, home, mortality and love through a couple’s relationship. A highly sensory work, the audience experience the show from within small box-like movable rooms, that spin and reconfigure to create a physically disorienting space that evoke our house with a life of its own. The small audience of 36 are divided into 4 groups of 9. Each group enters through the door of the theatre directly into a small, box-like room, with garish wallpaper and all the trimmings (skirting board, air vent, light fitting, door and window). The room begins to move (each room has been constructed to be on wheels) and the audience is forced to move along with the room. The rooms would then open up onto a series of vignettes depicting a couple, a man and woman, going through the various permutations of domestic life. The banalities of a relationship, negative self-talk and doubt, desiring a better home, a joyous dance, a confronting argument, an ugly party, a dream of a perfect home, and an attempt to find each other and be together.

Hole in the Wall was created by Matt Prest and Clare Britton in collaboration with Hallie Shellam, Danny Egger, Halcyon Macleod, James Brown, Mirabelle Wouters, Jenn Blake, Alasdair Nicol and Peter Allott. It has been performed at Campbelltown Arts Centre, Next Wave Festival, Melbourne, and Performance Space, Sydney in May/June 2010.

Friend him on the CP Network: