Discussion: Let’s Try That Once More, This Time In The Past: Performance & Documentation at Union Docs (NYC) 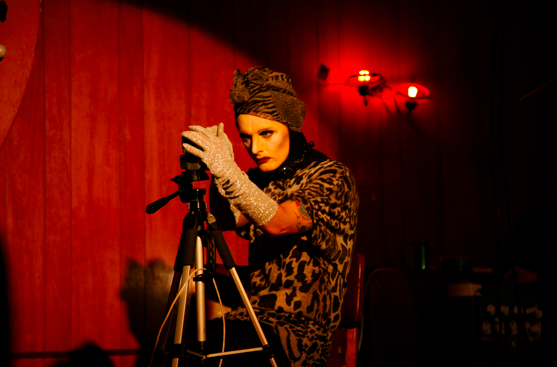 Let’s Try That Once More, This Time In The Past: Performance & Documentation

Johanna Linsley and Christa Holka in attendance for discussion.

(From The Organizers) As performance navigates the shifting of its institutional position – from practitioners’ self-identification as alternative/radical/revolutionary to blockbuster museum fodder – artists and academics (and artist-academics) are re-evaluating the stories performance tells about itself.

The debate about performance and documentation, which for many years centered on questions of the inherent “liveness” of performance, has recently moved to issues of performance “remains” (Rebecca Schneider) and the particular histories and forms of knowledge that performance can engender.

From Marina Abramovic’s outings at the Museum of Modern Art and the Guggenheim, to groups like the UK-based Performance Re-enactment Society, strategies for the preservation and re-presentation of performance history are being developed, and a host of new challenges and political problems are emerging.

The hugely influential Franklin Furnace archive, for example, has in recent years been the subject of numerous exhibitions and a book published in 2010 (Franklin Furnace and the Spirit of the Avant-Garde: A History of the Future, Toni Sant). Begun as a gallery in founding director Martha Wilson’s Tribeca storefront in 1976, the organisation shifted into a virtual space in 1997, its archives and programs becoming represented primarily online. Its mission is to present and preserve such ephemeral media as artists’ books and multiples, temporary installations, and performance art, and to support the work of artists in the early stages of their careers.

A number of new initiatives have also arisen to creatively produce performance documentation, while thinking critically about what performance documentation can be and do. The new annual publication “Emergency INDEX” documents performances in the words of their creators, in hopes of capturing a state-of-the-field view of contemporary performance. INDEX includes performances of every kind, from any genre, made anywhere in the world for any purpose. INDEX’s sole requirement is that authors explain the purpose of the work, as well as describe the performance itself. An index of shared terms provides another level of documentation and an alternative way to connect geographically or stylistically far-flung works. The inaugural issue of INDEX documents performances from 2011, and is forthcoming in March 2012. INDEX is published by Ugly Duckling Presse as part of the Emergency series, which includes PLAYSCRIPTS (a series of radical performance notation), and ANALYSIS (a forthcoming series of theoretical texts on performance.

It is clear, then, that the document significantly conditions performance’s ability to be local and international, present and mediated, obscure and accessible, politically active and institutionally absorbed. This presentation and round-table event will touch on some of these rich and varied activities currently happening in this field. We will consider the role of photography in performance, from its use as documentation for publicity and funding to its potential as a collaborative element in the production of new work. We will look at some of the institutions and initiatives the produce and disseminate performance documentation. Finally, the event will stage an initial conversation aimed at facing some of the challenges performance and its documents poses.

Martha Wilson is an artist and the founding director of Franklin Furnace. Wilson’s own work in photography, performance, and video art explores female subjectivity through role-playing, costume transformations, and “invasions” of other people’s personas. She was also a member of DISBAND, an all-female performance group; it is in this context that she developed the character of Alexander M. Plague, Jr., one of several personas (both fictional and real; including that of Barbara Bush) that she has adopted over the years.

Matvei Yankelevich is the author of Boris by the Sea (Octopus Books) and Alpha Donut (United Artists Books). He is the translator and editor of Today I Wrote Nothing: The Selected Writings of Daniil Kharms (Ardis/Overlook). He is a member of the writing faculty at the Milton Avery Graduate School of the Arts at Bard College, and an editor at Ugly Duckling Presse, a volunteer-run, non-profit publishing house in Brooklyn, New York. With Yelena Gluzman, he edited the Emergency Gazette from 1999-2002, for which he wrote many reviews of experimental theater. He continues to work on Emergency projects: Index and Playscripts.

Yelena Gluzman conceives and directs experimental theater, recently School for Salomés (2011) at the Collapsable Hole in NYC, Steal Life #1 (2009) and The Emancipated Spectator (2010) at Superdeluxe in Tokyo. She is interested in various issues around repetition, and is pursuing this via a production of The Bacchae performed entirely by 3-6 year old children. She teaches at the University of Tokyo and the experimental art school Yotsuya Art Studium (sic). She is an editor at Ugly Duckling Presse, where she leads the Paperless Books Department and, with Matvei Yankelevich, edits the Emergency series of texts on performance.

Christa Holka is an American photographer who lives and works in London. Her work mainly uses photography to deal with issues of documenting and archiving the communities in which she exists. In recent years, she has increasingly worked with performance artists, documenting the work of such renowned artists as Vaginal Davis, Lois Weaver, Ron Athey, Carmelita Tropicana, Penny Arcade and many others.

Johanna Linsley is a researcher, writer, producer and performance artist. She is a founding partner of UnionDocs and research assistant on Performing Documents, a collaborative research project with the University of Bristol, the Arnolfini Arts Centre and Inbetween Time productions.

* Photo of Dickie Beau in “THIS IS NOT A DREAM” directed by Gavin Butt and Ben Walters and Presented by Performance Matters, a collaboration between Goldsmiths, University of London, University of Roehampton, and the Live Art Development Agency financially assisted by AHRC. Documentation by Christa Holka.