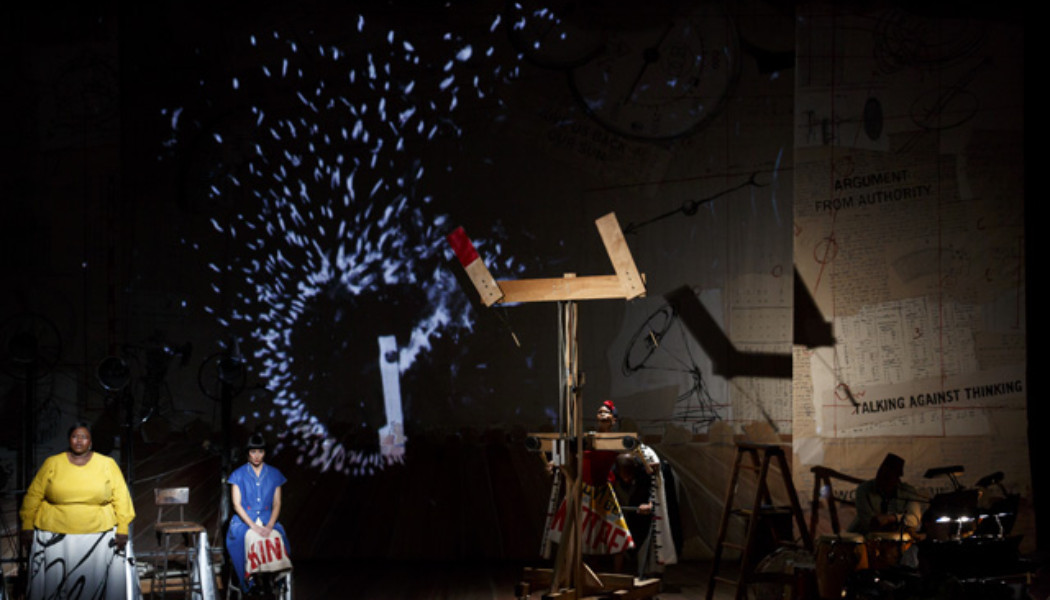 “The associate artist of this 66th Festival is the actor and director Simon McBurney. After studying with Jacques Lecoq in Paris, he returned to London where he founded his company Complicite, which knows no bounds, either geographic or artistic. Each of his creations is an opportunity to bring together collaborators using all the media possible: words, often adapted from literature, bodies, gestures, images and music. Together they find a common language by creating an iconoclastic and moving theatre. Simon McBurney’s choice to adapt, for the Cour d’honneur of the Popes’ Palace, The Master and Margarita by Mikhail Bulgakov shows his desire to stage rich and lively stories in which different times and imaginative worlds intertwine, and to consider the theatre above all as a place for invention and commitment. He shares this approach with the English writer John Berger, whose presence will also mark this Festival. Through his writings, he uncompromisingly tells about man and his capacity to love, society and its injustice, or works of art and their mysterious power. The spirit of “complicity” will cross this Festival, to which we have invited artists from different horizons who, by inventing their own theatre, question us about its foundations.” —The Festival d’Avignon

Below are Contemporary Performance’s Highlights for this years edition of The Festival d’Avignon. Full program can be viewed here–>

It is not one, but a whole entanglement of stories on which Forced Entertainment’s new creation, The Coming Storm, is based. A way for the Sheffield collective to explode the narration, question the sources and the structure of our stories, but also to ponder the theatre form. Some of these stories presented by the actors are real, others invented. Some of them are presented as the script of an imaginary film, some echo the plots of classic novels; others twist fairy tales or are inspired by tales from folklore. Using procedures that come from amateur dramatics, song and naïve dance, the six actor-performers of Forced Entertainment stage a tangle of patched-up stories that, all together, form an epic tale, a saga that decidedly becomes too large for the dimensions of the stage. This unwieldy narrative is absurd, contradictory and threatens to fall apart at any moment as it is overwritten, and cannibalized. In a style as resolutely inventive as it is falsely clumsy, theatrical tricks give way to broken dances, pieces of live music and increasingly frantic attempt to give substance to this blackly but terribly comic haunting tale.

Is it possible to materialize time on a stage? To answer this question, it is at the line between art and science that William Kentridge carries us along in the company of the physicist Peter Galison, a Harvard professor. Using this dialogue as a starting point, he designed an exhibition for the major contemporary art event, the Documenta of Kassel, in June 2012 and, at the same time, a show for the Festival d’Avignon. With the composer Philip Miller, the choreographer Dada Masilo and the video-maker Catherine Meyburgh, he brings together actors, dancers and singers in this show and plunges them into a world or objects drawn from his unbridled imagination or simply from our daily life, but also diverted from their primary function. Through this world of sounds, songs and images in all their forms – drawings, films, photos –, three times are questioned: Newton’s absolute time, Einstein’s relative time as well as the distortion of space-time, created by the “black hole” phenomenon, subjects as so many metaphors. Because Refuse the Hour is not an illustration of these questions through artistic means but the construction of stories, scripts, brilliantly combining scientific abstractions and very tangible spectacular phenomena. It is through this confrontation of elements composing his performance that William Kentridge moves his project forward and builds it: the men are confronted with the machines they handle, Berlioz’s notes harmonize with those of African music, Méliès’ films go back in time… In this way an overflow is produced that makes it possible to go very much beyond the single scientific notion of time to take an interest in that of the destiny as well as the pressure that time exerts on our contemporary societies, without forgetting to question colonial time, that time that separated the colonies from the “mother country”. Decidedly poetic, William Kentridge’s work then appears closely intertwined with politics. A white citizen of an African country, he constantly makes his art the place for a vision of a possible and real change in human behaviours. Without the least nihilism, he offers, through this new dreamscape, a possibility for abolishing the lines between art and science so that they interpret and re-imagine, together, the too often threatening world that surrounds us. JFP

To question the strength and danger of the image, this image that fascinates and torments, that lights up and conceals, a manipulated image, composed and recomposed, Romeo Castellucci built a multi-episode theatre cycle, each episode nourished by the crossing of a pictorial or literary work permitting the director to broaden the field of his questioning. After the face of Christ (Salvator Mundi) painted by Antonello de Messina, which questioned the look-image that called out, pursued and watched in the show On the Concept of the Face of the Son of God, after the story of the Reverend Mr Hooper who, in Nathaniel Hawthorne’s short story, The Minister’s Black Veil, questions the violence of the disappearance of a face, Romeo Castellucci looks at the story of the painter Mark Rothko taking his paintings down from the walls of the New York restaurant that had commissioned them from him. Behind this true story that happened in 1958, he ponders the torment of man faced with images and their use, but also the social rejection which the artist made himself the promoter of. In alluding to the effacing of the image desired by the painter, who found it impossible to exhibit his works in a place like the Four Seasons Restaurant considering its wealthy but also terribly superficial clientele, Rome Castellucci wishes to probe “the relationship between representation and negation of the appearance that, since Greek tragedy, has sustained the entire relationship of Western man and the image”. Mark Rothko moreover always considered Greek tragedy as the foundation of his painting. Once again, without any naturalism, without any explicit reference, the images that come from Romeo Castellucci’s imagination will make form emerge in the midst of chaos, to permit us to no longer only see but to enter “Rothko’s human picture” and to become aware that the painter’s decision “traces the orbit of absence”, this curved trajectory that never returns that can push us to the edge of the abyss. JFP

A man is sitting on a wooden container. A blue cap and a rucksack give him the look of a traveller. At the end of the path, he takes his shoes off and dances. Sakinan Göze Çöp Batar is a poem on exile, on the solitude of the surveyor. His interpreter, Kerem Gelebek, comes from Turkey. He came to France to train at the CNCD of Angers and now lives in Berlin. He has taken part in four shows by Christian Rizzo who, today, is creating a solo for him, in which their itineraries and their respective experiences of being far from home cross and echo each other: a solo in which the choreography says that he is “projecting himself by proxy”. Of course, Kerem Gelebek wears Christian Rizzo’s shirt, handles some of his pet objects – a table, a plant, a few books – and appropriates his choreographic vocabulary. But he also develops a personal language, crossed with traditional dance, undulations and dizzying whirls. From caresses to cracks, he inserts himself into the melancholic world of the choreographer as much as he enriches it, diverts it and sometimes subverts it. On stage, Kerem Gelebek moves like a mountain climber. With precision, suppleness and calm, until he lets go, secured by the choreographer who holds the rope and in this way permits him to express himself. In Turkish Sakinan Göze Çöp Batar literally means: “An over-protected eye always gets sand in it”. Or, in other words: it is by protecting yourself that you most risk hurting yourself. A title in the form of an invitation to daring, trust, for a solo in which the other is never far. RB