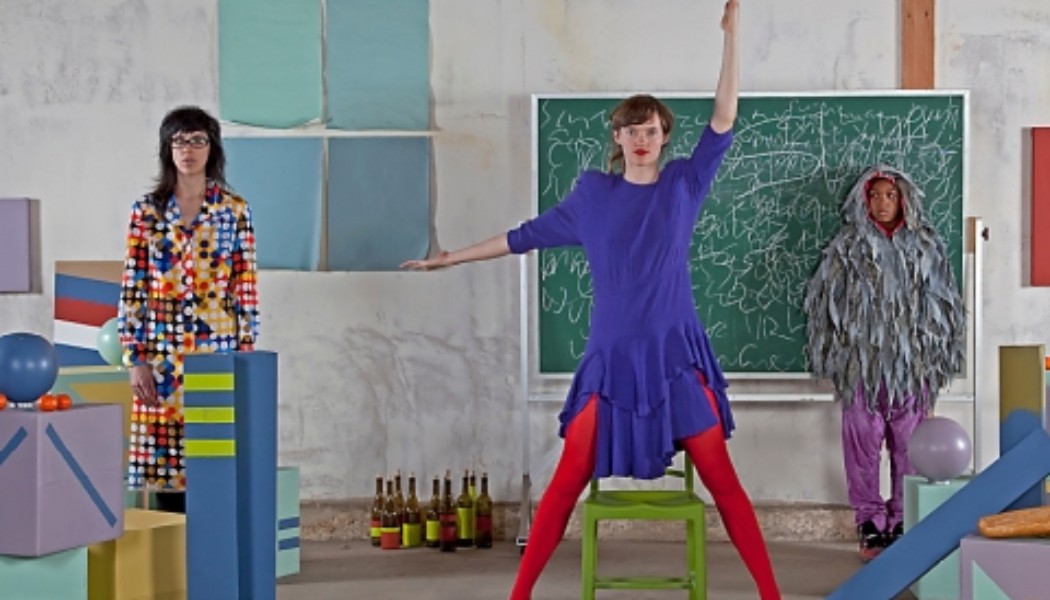 OPERA POVERA: TO VALERIE SOLANAS AND MARILYN MONROE IN RECOGNITION OF THEIR DESPERATION

Opera Povera artistic director Sean Griffin and vocalist Juliana Snapper pay tribute to renowned composer Pauline Oliveros with an illuminatingly operatic staging of her score from 1970. Written shortly after she read Solanas’ SCUM Manifesto, Oliveros uses her title to connect the tragic lives of two iconic women, and through her wordless composition structurally evokes the feminist principles Manifesto sets forth. Griffin floods the stage with saturated light in a nuanced reflection of Oliveros’ timbral shifts, while Snapper’s powerfully vulnerable voice is visited by a luminous future-presence, offering the solace of future freedoms with palpable emotional force.

In Exhibit A director and puppeteer Susan Simpson blends historical fact with speculative fiction to explore the convergence of radical visionaries that populated the hills of Silver Lake in the 1950s. Archival letters and journal entries delve into the lives of landmark figures, including Harry Hay and John Lautner, while unnamed alien visitors roam the transforming landscape. Using model replicas, green-screen video effects and live music by Pitch Like Masses, Simpson and her performers—both human and puppet—generate a moody, disorienting vision of an era of shifting consciousness that has profoundly shaped the present.

As part of an ongoing investigative dance project, experimental choreographers Nick Duran and Jmy James Kidd repurpose movement stored in their bodies from throughout their careers—together, they have danced for Luciana Achugar, Seán Curran, Neil Greenberg, Victoria Marks, Mark Morris, Sarah Michelson, among many others—to create an uncanny duet that reveals lineages of movement. In a sense stolen, yet transformed, transposed and renewed, the dance is performed in strict unison to highlight subtle expressions of individual desire within the confines of choreographic legacies that stem back decades.

Sound and video artist Jinku Kim composes hypnotic, data-driven synchronizations of electronic music and abstract projected imagery that respond to architecture as both a medium and a source of inspiration. For his latest sense-saturating work, he fills the theater with a looming, cantilevered surface developed in collaboration with scenic artist Drew Foster that serves as a luminous skin, immersing the audience in gravity-subverting configurations of pulsing color and light that amplify his time-altering spatialzied sound.

PRUMSODUN OK: OF LAND AND SKY

Prumsodun Ok’s multimedia performance draws on Cambodian pop music and traditional dance to retell and recast a classical drama. Following the narrative of a mythological Buddhist tale in which an earth-bound deity falls in love with a mortal, Of Land and Sky re-imagines the central lovers as two gay men and surrounds them with a chorus of intergenerational women to explore notions of femininity, beauty and transgressive love. A classically trained artist who refuses to dismantle his tradition even as he challenges its constraints, Ok invokes contemporary political inquiry while retaining the elegant gestural language of Khmer dance.

Within a landscape of vivid colorful forms, seven distinct performers describe, transcribe, interpret and gesture in a series of vignettes that expose the problematic nature of communications and the ways that words serve as objects onto which meanings are projected. Working at the intersection of visual art and theater, Emily Mast casts an ASL interpreter, an auctioneer, a stutterer and others in this stylized and exploratory performance. With allusions to the true story of Alex, a verbally skilled parrot that was the subject of controversial findings, B!RDBRA!N questions whether our understanding is, as one of Alex’s critics wrote, simply a “complex discriminative performance.”

Following the end of Guatemala’s 30-year civil war, Melanie Rios Glaser performed site-specific dances in Guatemala City as part of a fearless group of performance- based artists. In the late 1990s, these artists’ electrifying work overtly confronted decades of ongoing violence, enforced social norms and repressive politics, and now Rios Glaser returns to the impulses behind that creative flourishing. Along with four multitalented improvisors—Karinne Keithley Syers, Jmy James Kidd, Rebecca Bruno and Luke Hegel-Cantarella—her new scores for improvisational dance stem from the strategies of those years, and reflect on an influential era through messy, obsessive movement and humorously confessional commentary.

HEATHER WOODBURY: AS THE GLOBE WARMS

Obie Award-winning theater artist Heather Woodbury is known for crafting sweeping dramatic narratives with contemporary echoes of 19th-century serial fiction. Now, she presents the first glimpse at a live solo distillation of her epic, web-cast soap opera, part of a planned 12-hour opus. Weaving the stories of a multitude of characters that inhabit Vane Springs, Nevada, As the Globe Warms takes on the social complexities of climate crisis with sympathetic humor while it generates unexpected empathies: between rural and urban populations, atheists and devout Christians, wired-up humanity and the other forms of life on this planet.