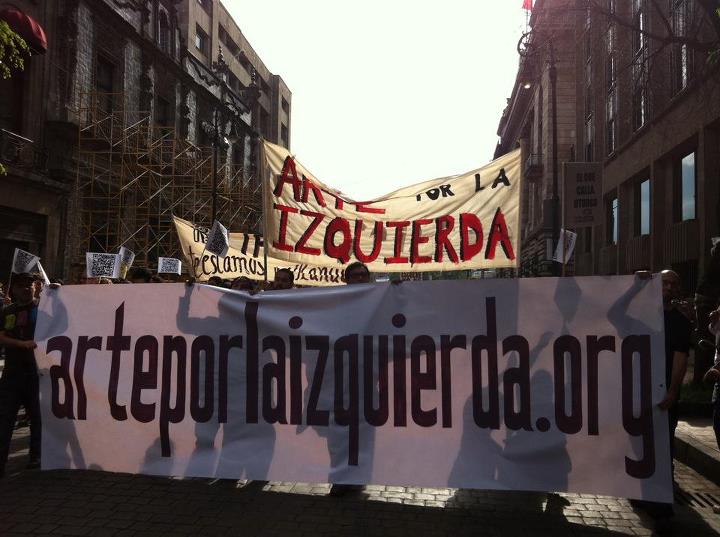 We live in the trenches that the government has built, installed around our ideas. From there we raise our willingness, hopping to break these seemingly solid structures of control, so obvious, with those qualities that Chomsky gave to a specific method of manipulation.

The day after the presidential election I woke up with sadness, the feeling of my space and my effort being corrupted made me spill some tears.

All the sense of perfection that we people never reach, it’s contained in the idea of a concept. The idea of freedom, happiness, love, are perfect in themselves, their content is the will of what we recognize as human. We use these ideas as the soul of our discursive structures.

To the attempt of the oldest political party to break our words and ideas by wangling the elections, the community has responded with a loud public voice demand. Part of this voice is the cultural community, which is also fighting for the respect of the political process. Especially artists, who side to side with other agents of the art scene have formed action groups to express their dissatisfaction with the situation.

Through performance, artists have found the tool to substantiate social demand proposals against this background. It is likely that public action designed and organized means a way to increase the volume of the inner voice, that it is totally silent on the lips and generally speaking from inside our heads in a whisper. The performance has been during these weeks the public realization of the whisperings that lives in head of many artists.

In particular the group “Arte por la izquierda”, made up of cultural players from signing an online document is organized to be present in the peaceful marches of dissent in the name to stop the abuse of the electoral system.

In the last release (August 21, 2012), “Arte por la izquierda” calls for general assembly members to suggest lines of action, including discussion and analysis of the situation, keeping clear the importance of performative intervention in the agenda. API has made three artistic interventions that make a direct critic to the disposal systems used to manipulate society, especially vulnerable groups with poor educational level.

The next few months will be decisive for the future of the country and its culture systems, the imposition of an illegitimate government whose proposals threaten human growth and consequently the fundamental ideas of culture it´s not clear.

Mexico and its artists are still standing.

It would be interesting to take note about the uses of performance as a speech to government all around the world.

Whats your take on art in the urban spaces using performance as an answer to the government impositions?